“A while back, I found a record album in a thrift store here in NYC, and I just had to buy it,” writes Adam King. Any cartophile will understand why. This is the front cover of Nile Rodgers’ 1983 solo album ‘Adventures in the Land of the Good Groove’.

Nile Rodgers started out as a session guitarist for the Sesame Street band, Harlem’s Apollo Theater house band and as a backing musician for Aretha Franklin and Parliament Funkadelic, among others. He became famous with the disco band Chic, best known for their hit ‘Le Freak’. A sample of Chic’s ‘Good Times’ was featured in the Sugarhill Gang’s ‘Rapper’s Delight’, which is often cited as the first hip-hop record. After Chic’s demise in 1983, Rodgers founded Sister Sledge (hit: ‘We Are Family’) and focused on producing (for Diana Ross, David Bowie, Madonna, Duran Duran, Laurie Anderson, INXS, and many others). 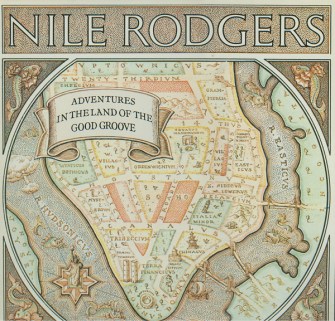 For this Nile Rodgers solo album, the native New Yorker turned Lower Manhattan into the ‘Land of the Good Groove’. The map is made to look like an antique map of the 17th century or thereabouts, down to the ornamental ships and ‘monsters’ in the water. The use of (pig) Latin amplifies the old feel of the map, and is used to some humorous effect — Brooklyn is labelled Terra Incognita and New Jersey is Nova Joisea.

Many thanks to Mr King for sending in this image of the album cover.

The most common element in the Universe, vital for forming new stars, is hydrogen. But there’s a finite amount of it; what if we run out?
Up Next
Strange Maps