Imagine. Italian songs echoing off the Danube shores. The Netherlands big enough not to have to worry about the sea. A French-Polish border. Imagine Europe without Germany. This map does.

During most of the first half of the 20th century, Germany was seen by much of the rest of the world as a rogue state in the heart of Europe, its incorrigible belligerence a problem not only to be defeated but also to be eradicated – somehow. Inevitably, some on the lunatic fringe called for wiping Germany off the map — literally. One such plan was discussed earlier on this blog (#50).

Although that particular plan was real, and even though the Second World War was contested with more apocalyptic zeal than any other modern-era conflict, simply obliterating Germany was never seriously considered an option. The aforementioned Kaufmann scheme was the work of a lone pamphlettist, and profited Nazi propaganda more than the Allied cause.

Even the Morgenthau plan, used to similar effect by the German propaganda machine, never envisioned dissolving Germany — merely dismembering and dividing it, while neutralising its economic capacity to wage war. This is in effect what happened after the war, albeit that on top of this, the two halves of Germany ended up on opposing sides of the ideological fence now dissecting Europe.

This ‘neutralised’ Germany and relegated questions of its right to exist to the dustbin of history. Some of the old anxieties did resurface in 1989, when the Berlin Wall fell and the West Germans steamrollered German Reunification, much to the dismay of many others. “I like Germany so much that I prefer to have two of them”, was the sarcastic sentiment of many European politicians (the quote is attributed to French writer François Mauriac). 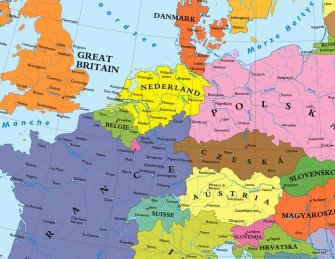 Is this what a Europe without Germany could have looked like? For starters, it doesn’t resemble the Kaufmann map (cf. sup.) And it’s unknown which basis in fact (or fiction) it might have. But the re-drawn borders don’t look like an occupation so much as an absorption: German toponyms have been rendered in the idioms of each conquering country.

Some of the toponyms used here are the accepted translations for German city names already in use in other languages, e.g. Keulen (Dutch), Hamborg (Danish) and Mayence (French). Others are overtranslated: e.g. Eeten for Essen, both of which mean ‘to eat’ in Dutch and German respectively, whereas the city derives its name from a term for the East of for ash trees.

This map found some time ago on the Kalimedia website, which also publishes The Atlas of True Names, discussed in #334. Many thanks to all those who sent in this map.