Greendale, released in 2003 by Neil Young, is about life in a fictitious Californian coastal town as seen through the prism of the Green family. The songs on Greendale deal with some of Young’s favourite themes — anti-war activism, environmentalism, social ostracism, violent crime and all of their social consequences. Greendale focuses on an ageing patriarch (also a pioneer and hippie) his son Earl (an artist and Vietnam vet), granddaughter Sun (environmental activist), and the spiel kickstarts when ne’er-do-well Jed kills a policeman. 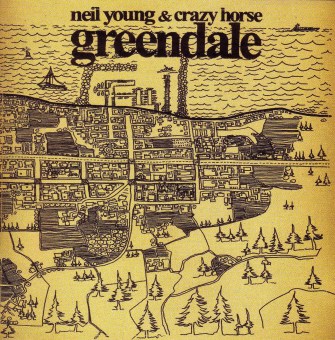 The story echoes the energetic political activism of the Sixties. The album cover for Greendale is a map of the fictional town, showing how its centre hugs the Californian coast (the outskirts continue on the back of the album). On the album’s very own website, you can scroll over the map to enlarge certain details relevant to the songs (*):

In keeping with Young’s  abrasive, anti-commercial image, the map does not link to a place where you can buy the album. It merely states: This town is now available. 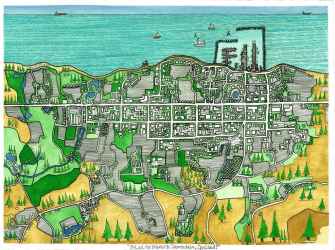 Many thanks to Christof Rutten for sending in this map; and to James Mazzeo, the artist who created the original Greendale artwork, who sent in the fantastic, full-colour version of the Greendale map. “Neil and I have been friends since 1972,” he writes. “He wrote the song ‘Bandit’ about me.” (Bandit being one of the songs on Greendale, Ed.) The movie accompanying the album also featured James, who played the role of Earl Green. James road-managed CSNY on their 1974 world tour, worked on Neil Young & Crazy Horse tours across the globe – and even played in a band with Neil himself: “He lived with me in Santa Cruz in 1977 and we had a summer surf band we called ‘Ducks’.”