The Florentine mathematician, astronomer and cosmographer Paolo dal Pozzo Toscanelli (1397-1482) is probably best remembered for his proposal in 1474 to the Portuguese court of a scheme to sail west as a shortcut to reach the fabled Spice Islands in the east. Toscanelli never made it across the ocean, but his proposal did inspire Columbus, who took Toscanelli’s map with him on his first transatlantic voyage in 1492. This map shows how the Genoese navigator was not only inspired by Toscanelli, but also misguided by his underestimation of the Earth’s circumference. The error led Columbus to think he had reached Cipangu (Japan) instead of a whole new, unknown continent lying in between Europe and Asia.

The eastern part of Toscanellli’s map, showing the extreme west of Europe and northwest of Africa, is quite accurate, even if the size of the land masses is exaggerated (in relation to the ghostly projection of the Americas); Portuguese mariners had travelled quite far south along the coast of Africa, and knew about the Azores (rediscovered in 1427). The Canary Islands were conquered by the Castilians from 1402 onwards. Nevertheless, many of the islands pictured here in the western Atlantic Ocean are quite clearly some of the many phantom islands that for a long time were recorded on maps, but were never more than legends. One such example is Hy-Brasil #572), probably one of the islands pictured close to Ireland on this map.

Another phantom island, mentioned by name here, is Antillia, also known as the Island of Seven Cities or St Brendan’s Island, and often used as a synonym for the Isles of the Blessed or the Fortunate Islands. The muddled legends of Antillia have been around since at least Plutarch’s time (ca. 74 AD). Its name might be a corruption of Atlantis; or a derivation of anterioris insula, Latin for an island located ‘before’ Cipangu; or a transformation of Jazeerat at-Tennyn, Arabic for ‘Island of the Dragon’. Toscanelli on his map uses Antillia as the main marker for measuring distance between Portugal and Cipangu. 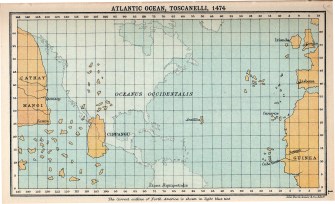 The reference to Sete Ciudades (‘Seven Cities’) is reminiscent of an Iberian legend of seven bishops fleeing the Arab conquest of the peninsula and founding a city each on the island, which became a sort of Utopian commonwealth. Some claim the legend of Antillia represents an earlier discovery of the islands that eventually became known as… the Antilles. Improving nautical knowledge eventually led Antillia to disappear from maps, but the legends surrounding it continued to inspire explorers for a long time – e.g. the ‘Seven Cities’, that were sought in the Southwest of the US or even posited on Cape Breton Island in Canada.

Cippangu (also written as Cipangu, Zipangu or Jipangu) is the name by which Japan had been known in Europe since Marco Polo brought home the name of the island. The name derives from an early Chinese word for Japan, Ribenguo, meaning ‘country of sun origin’. Polo’s description of Cippangu as being extremely rich in silver and gold triggered the imagination of Europeans for many years to come.

Cathay as a European name for China also derives from Marco Polo, who used it for northern China (southern China being ‘Manji’ in his accounts). Cathay probably comes from Khitan, a tribe in northern China. Only in the 19th century was the usage in English of Cathay eclipsed by the word ‘China’. Russian still uses the word – there’s still an area of Moscow called Kitaigorod, ‘Chinatown’.

Many thanks to Roland Ottewell, who scanned this map from ‘A Literary and Historical Atlas of America’, probably published before 1920.