The territorial history of the US seems pretty straightforward: 13 British colonies on the eastern seaboard secede at the end of the eighteenth century, then follow their ‘Manifest Destiny’ westward, eventually encompassing 50 states by the middle of the twentieth century.

There are, however, ‘territorial anomalies’ that serve as interesting footnotes to this consolidation of empire. One of them is the Republic of Indian Stream: a self-declared (but unrecognised) republic in a ‘grey area’ between the US and Canada, that existed from 1832 to 1835. Although very small and sparsely populated (the ‘Streamers’ never numbered more than about 300), the RoIS boasted a constitution and an elected government.

The ‘grey area’ in which the RoIS was established, resulted from an ambiguity in the Treaty of Paris (1783), which established the border between the newly independent US and the remainder of British North America. It defined the border between the US and (what was to become) Canada in the north of New Hampshire as the northwesternmost head of the Connecticut River. There are however several possibilities, as shown on the map: the heads of Hall’s, Indian and Perry Streams, and Third Lake, the origin of the Connecticut River itself.

Obviously, the US and Britain each interpreted the ambiguity to their maximum advantage, the US considering Hall’s Stream the border between the two states, and Britain opting for the waterway beginning at Third Lake. As a result of this, the area in between was neither here nor there. Except for tax purposes. Both states sent tax and debt collectors into the area – which chagrined the inhabitants so much that they declared their independence… but only until the Americans and the British could sort out their differences. 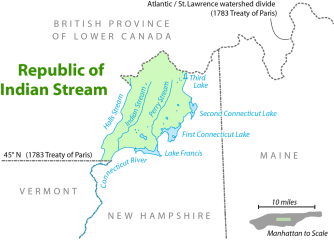 Things came to a head when a band of Streamers invaded Canada to liberate one of their countrymen from custody. This particular Streamer had been arrested by a British sheriff because of an unpaid hardware store debt. The invading posse shot up the judge’s house where their compatriot was held. This caused an international incident – even if the idea of going to war over a case of shoplifting seems a bit over the top.

As the Brits and Yanks agreed to resolve this particular border dispute, the Streamers hastily voted to be annexed by the US. The New Hampshire Militia occupied the area shortly thereafter. Britain relinquished its claim in 1836 and the border was established according to the ‘maximalist’ American interpretation of the Treaty of Paris.

In 1840, the area of the RoIS was incorporated as the township of Pittsburg, which still is the largest township in the US, covering about 750 km². The dispute was definitively resolved in 1842 in the Webster-Ashburton Treaty, which mainly dealt with the establishment of the boundary between (what were to become) the US state of Maine and the Canadian province of New Brunswick.

This map was taken from this Wikipedia page.

When should we seek justice, and when should we forgive? A bishop explains.
▸
5 min
—
with
Bishop Barron
Up Next
Strange Maps