Mongo is approximately one half the diameter of Earth, but has a gravitational density that is only slightly less. It is a relatively young world, with towering mountains not yet worn smooth by time and many areas of volcanic activity. Its vegetation is still limited to isolated areas of botanical giants. Biologically, it is still in the era of reptilian giants. Man evolved fast into diverse races, many of which possess amazingly advanced technology while others still live in primitive and unexplored regions.

If that description isn’t enough to kickstart daydreams of amazing adventures on an alien planet, then this map will do the trick. Mongo is the planet on which Flash Gordon crash-lands – not just once, but twice.

And who could blame him? Mongo‘s abundance of climates, landscapes, and both humanoid and monster races are ideal for adventuring. If you crave danger and excitement, there are worse places to end up than on a planet containing:

Mongo, invented in 1934 by Flash Gordon cartoonist Alex Raymond, is inhabited by a variety of humanoid races and ruled from Mingo City by Ming the Merciless, a harsh usurper.

Flash Gordon unites the oppressed peoples of Mongo and eventually restores the rightful ruler, Prince Barin, to the throne. Many further adventures ensue.

In the first Flash Gordon stories, Mongo is described as a rogue planet, entering our solar system. In later stories, Flash Gordon reaches the planet through a wormhole. 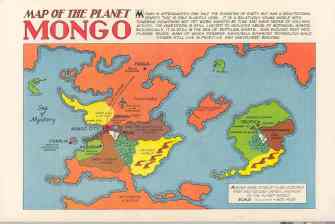 This map of Mongo was drawn by Arlene Williamson, the wife of Al Williamson, the cartoonist who produced a new Flash Gordon comic book series from 1966. Map found here at ERBZine, an online fanzine dedicated to Edgar Rice Burroughs.