Take that, Harry Beck. Try as you might, the lines on your Tube map could never be as straight as this.

Beck schematised a transportation system that was completely irregularly laid out to begin with. This map, however, shows how planning ahead would enable not just symmetry, but also better living conditions, or as the map itself states: “Slumless, Smokeless Cities”.

The map was drawn up by Sir Ebenezer Howard (1850-1928), the father of the garden city movement. Howard believed the living conditions of the poor, huddled masses cramped together in giant, insalubrious cities could be improved by combining the best aspects of town and country and carefully allocating space to housing, industry and agriculture.

He explained his urban planning ideas in ‘Tomorrow: a Peaceful Path to Real Reform’ (1898), republished as ‘Garden Cities of To-morrow’ in 1902, the year before he would actually found the very first garden city in the world: Letchworth Garden City, in the south of England. In 1920, he would found a second one, Welwyn Garden City, where he single-handedly planted a tree in the garden of each house.

The British garden city movement was important influence on the later strategy of building new towns in the UK, and spawned parallel movements in the US, Canada, Argentina, Israel and Germany.

As with most instances of social engineering, the garden city movement didn’t quite achieve what it set out to do. Its laudable motives and egalitarian vision contrast with the often depressing artificiality of ‘garden cities’, and the fact that they merely function as dormitories to the larger cities they so often adjoin. 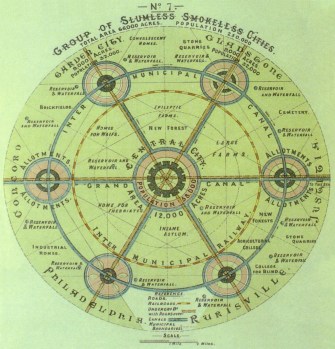 This map of a planned, but as yet unbuilt conurbation of ‘slumless, smokeless cities’ has a few notable aspects:

• Central City (pop. 58.000) is the hub for 6 surrounding garden cities (pop. 32.000 each), all given idyllic names such as Philadelphia (‘brotherly love’), Rurisville (as in ‘rural’), Justitia, Gladstone (presumably after the Prime Minister), Garden City and Concord.

• Each of these 7 urban centres is surrounded by a canal, which also connects them to the neighbouring and the central cities, forming a wheel-shaped system of waterways, the Inter Municipal Canal.

• A slightly smaller circle is formed by the Inter Municipal Railway. Within this circle lie several curious institutions: ‘Homes for Waifs’ (one imagines a neighbourhood populated by petite, sulking catwalk beauties), ‘Epileptic Farms’ (must be annoying for the cows when they’re being milked), ‘Large Farms’, an ‘Insane Asylum’ and a ‘Home for Inebriates’.

• Although all basically the same shape (a circle divided into four equal parts by the intersecting waterways), each of the satellite cities has a different lay-out, allowing for variation (so those inebriates aren’t unduly confused on their way home).

This map was provided to me by Arjan Daniels.

The atmosphere’s habitable zone is so small, several mountain ranges extend beyond it.
Up Next
Strange Maps