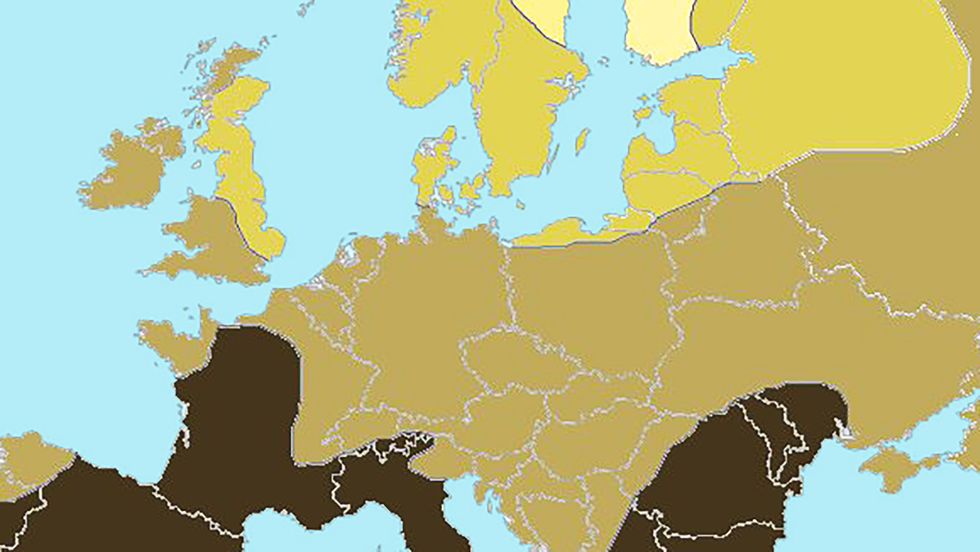 Q: How do you get a blonde out of a tree?

According to this map – and if you really believe that blondes have less brains – a nasty fall like that is more likely to happen in the central parts of Norway, Sweden and Finland, where at least 80% of the population is fair-haired, the highest figure in all of Europe.

This map, indicating the varying degrees of blondness in Europe, shows how fair hair gets rarer further away from this core area – towards the south, as one intuitively might presume, but also towards the east, west and even towards the north.

The consecutive bands (coloured in such a way as to approximately represent the ‘average’ hair colour in each area) surrounding the core blonde area in Scandinavia in most cases don’t correspond with national boundaries, but could be taken to represent certain degrees of ethnic variation, often with a possible historical explanation.

I’ve no idea which year this map is from, but it seems fair to say - pun intended - that the larger mobility of people nowadays would make for a more diffuse distribution of hair colouration. Which dovetails nicely with this blonde joke:

Q: What did the blonde do when she heard that 90% of accidents occur around the home?

The map was sent to me by Faluvégi Balázs from Hungary, and can be found here on eupedia.com, together with other interesting maps showing the distribution of eye-colour, religion, ethnicity, GDP per capita, legal age to purchase and drink alcohol and even the legal status of cannabis.