For a long time, Australia was known as New Holland, after the country that first explored the island/continent. The British, who eventually colonised it, at first adopted the name, but settled on an adaptation of the term Terra Australis for their new colony. That name refers tothe giant continent in the South that was thought by pre-exploration geographers in the Old World to counterbalance the land-mass of the then-known world (see #575).

The name of the country might very well have been New South Wales. At present, NSW is just one of six states (1) that compose the Commonwealth of Australia – and a relatively small state at that – but NSW at one time covered almost half of the country. At that time it was the only British colony on Australian soil, making it at least plausible that the name might have expanded with British sovereignty.

But that was not to be. As this map (the origin of which I unfortunately haven’t recorded) shows, NSW has steadily shrunk in size as other states and territories emerged or were split off from the ‘mother colony’. The map, dating from 1904, shows the evolution of NSW (and the nameless other half of the country) to Australia. 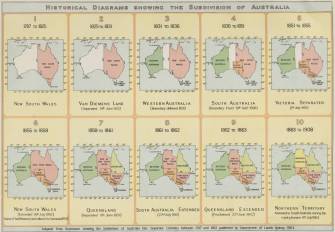 For good measure: the map denotes the situation as of the first date mentioned, and up until the second date.

Actor and science communicator Alan Alda shares his three rules of three for effective and empathic communication.
Up Next
Strange Maps