With the United Kingdom now fully committed to Brexit, the European Union can finally revert to what was the secret plan all along. As prescribed in the secret addenda to the Treaties of Rome, Lisbon and Maastricht, the EU will be belgianised – in short: it will become a forced synthesis between north and south, never stronger than when it is on the verge of breaking up, which is always.

Belgium itself is the world capital of surrealism, a country of which Rene Magritte, one of its most famous artists, might well have said: Ceci n’est pas un pays. And being a high-functioning non-country is exactly the European Union’s best hope for the future.

So it’s no coincidence that Brussels, the capital of both Belgium and of its federated region Flanders (1), is also the capital of Europe. This is in preparation for the expansion of the Kingdom of Belgium. One day soon, it will balloon to become a super-state covering much of continental Europe.

As revealed by this map (burn after reading): 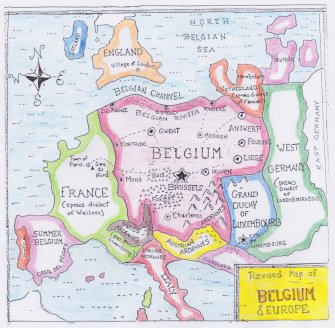 Belgium in its current shape has only 66.5 km of coast. Barring tiny island nations like Niue, mini-states like Monaco and of course landlocked countries, that makes Belgium the country with the seventh-shortest shoreline in the world (2). No more: the Belgian coast will expand to stretch hundreds of kilometres along what will henceforth be known as the Belgian Channel – say goodbye to the English one – but strangely, miraculously, still only run from De Panne in the west to Knokke in the east, as it does now.

Medium-sized Belgian towns such as Ghent, Leuven, Charleroi and Antwerp will become European megacities, much as they once were, during the Middle Ages.

The Ardennes, the softly undulating hill country in the south of Belgium, will move south and merge with the more pronounced indentations of the Alps. Thus, Switzerland will become the Swiss Ardennes, northern Italy now is the Italian Ardennes, and Austria is just the Austrian Ardennes.

The Flemings in the north of Belgium speak Dutch, the Walloons in the south speak French, a fact inspiring most observers to believe a breakup of Belgium would lead to the respective halves of the country merging with the Netherlands and France, respectively. They have got it backwards: it is the Dutch and French who speak a dialect of Flemish and Walloon. This will facilitate their absorption into the Belgian superstate. The Germans, for their part, speak a form of Luxembourgeois.

Luxembourg, for those not in the know, is a miniature version of Belgium: a multilingual, multicultural monarchy quietly merging the best bits of its neighbours into a highly comfortable and successful way of life. While other countries shrink, it gets to expand together with Belgium, and dominates the southwest of Europe.

The UK has shrunk to a very Little England indeed. Its capital, bereft of all those bankers, is henceforth known as the Village of London. Don’t get hit by any of those tumbleweeds rolling through Oxford Street. On the upside: rents have plummeted to pre-Thatcher prices.

The North Sea is the North Belgian Sea. Spain is Summer Belgium, with its Mediterranean coastline now dubbed Costa del Belges. As if they need any more coastline. Greedy Belgians!

This future map of Europe was leaked to me by Sarah Ratayczak, who is partially of Belgian descent. “I saw the map attached on the door of a Poli Sci professor’s office when I was an undergrad at Wisconsin. I asked for a copy – its Belgocentric view of the world appealed to me because my mom’s family is from Belgium (long long ago).”

(1) Brussels is a separate region, enclaved within Flanders; nevertheless, it is also the capital of the Flemish region. A surreal situation, but not entirely unique. There are many instances around the world of cities administering territories of which they are not a part. A remarkable example is Chandigarh, in India. This planned city – designed by Le Corbusier – is a Union territory, directly ruled from the Indian capital Delhi. It is also the capital of not just one, but two states, Punjab and Haryana, without being part of either.

Only 80 years ago, the world was a very different place