Half man-made, half the Big Muddy’s work – a 45,5 sq. km (17,5 sq. mi) sized enclaved border irregularity bounded on three sides by a hairpin turn in the Mississippi and in the south by Tennessee is known as the Kentucky Bend. But its denomination is as fixed as the river that created it. Alternate names are: the New Madrid Bend, the Madrid Bend, the Bessie Bend, and even ‘Bubbleland’.

Bubbleland was home to about a dozen Kentuckians, cut off from the mainland of their state by Missouri and Tennessee. Formally, their home is an exclave of Fulton County in Kentucky’s extreme southwest. It is only reachable via Tennessee State Route 22.

The event that created Bubbleland was the New Madrid Earthquake, actually a series of earthquakes in late 1811 and early 1812 that each may have registered 8.0 on the Richter scale, making them the largest quakes in the contiguous USA in recorded history. Not only flattening most of the town of New Madrid nearby in Missouri, the tremors – felt as far away as Connecticut – also shifted the course of the Mississippi.

This confounded the work of early surveyors plotting out the line that would mark the border between Kentucky and Tennessee. By 1812, they hadn’t made it as far as the Mississippi. Later, it turned out their line cut right through the loop in the Mississippi created by the quakes, crossing the river twice. 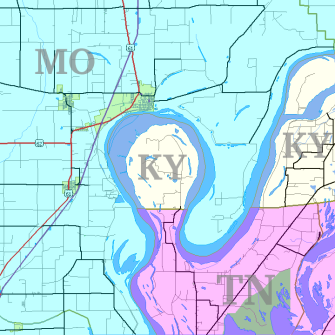 This led to legal wrangling between Kentucky and Tennessee; for Kentucky had secured the Mississippi as its western border and thus claimed the westernmost point on the line. Tennessee held that it nevertheless had rights on the land contained in the loop. In fact, Tennessee administered Bubbleland as part of its Obion County until at least 1848, but eventually dropped its claim.

Much to its regret, one can imagine, as the soil inside the loop proved extremely fertile cotton-growing land. The 1870 Census tallied more than 300 residents, mostly cotton-farmers. Interestingly, Bubbleland has two other claims to fame:

•From February 28 to April 28, 1862, the area was the location of the Battle of Island Number Ten between Union and Confederate forces in the American Civil War. The battle, which involved ironclad ships, was won by the Union side and opened up the Mississippi further south, eventually leading to the capture of Memphis by northern troops. Island Number Ten has since eroded away (although Island Number Nine still remains).

•In ‘Life on the Mississippi’ (1883), Mark Twain describes a vendetta lasting 60-odd years between the Darnell and Watson families living in Bubbleland: “Both families belonged to the same church … They lived each side of the line, and the church was at a landing called Compromise. Half the church and half the aisle was in Kentucky, the other half in Tennessee. Sundays you’d see the families drive up, all in their Sunday clothes, men, women, and children, and file up the aisle, and set down, quiet and orderly, one lot on the Tennessee side of the church and the other on the Kentucky side; and the men and boys would lean their guns up against the wall, handy, and then all hands would join in with the prayer and praise; though they say the man next the aisle didn’t kneel down, along with the rest of the family; kind of stood guard.”

Whether this blood feud is in some way responsible for the thinning of the population of Bubbleland could not be ascertained.

This map, and much of the information on which this text was based, can be found here in Wikipedia.

Related
Life
Scientists use CRISPR to insert an alligator gene into a catfish
Disease kills off 40% of farmed catfish. This gene protects them.
Neuropsych
How you breathe affects your brain
Your breathing rhythm influences a wide range of behaviors, cognition, and emotion.
Health
What happens when regular porn watchers abstain for a week?
Researchers watched for signs of withdrawal — but didn’t find any.
Neuropsych
Daily caffeine intake temporarily alters your brain structure
Compared to people who took a placebo, the brains of those who took caffeine pills had a temporarily smaller gray matter volume.
Thinking
Why you should laugh at yourself, according to Seneca and Nietzsche
“It is more human to laugh at life than to lament it.”
Up Next
Strange Maps
Centuries-old Cartoon Captures England’s True Feelings About France
Brexit lends a renewed poignancy to Gillray’s scatological cartoon