Poland at the time of the death of Boleslav the Wry-Mouthed 1138: how could one resist a map with a title like that? Not that the map isn’t remarkable in its own right. The starkly contrasting colour scheme with sinuous black rivers slicing through Polish white and white streams dissecting the the encircling black lands, the mention of better- and lesser-known lands and tribes (the Kurons and the Jadzvings!) and the delicate amplification of the coastline, making waves deep into the Baltic Sea: it all lends an unreal air to the map.

Surprisingly real, though, is the position and size of Poland. Considering how many times that country would expand, contract, be partitioned and reconstituted (no less than three times), shifting east and (most recently) west, the Poland of Boleslav the Wry-Mouthed looks remarkably much like present-day Polska. It seems the only missing parts are the southern part of the area occupied by the Prussians (a Baltic tribe, later displaced by German colonists) and the area hemmed in by the labels Bohemia and Moravia, usually referred to as Silesia.

What kind of king was Boleslav? Actually, no king at all, since he was Duke of Poland. Boleslav defeated the Pomeranians (go on, chuckle) in 1109, regaining access to the sea. Nominally a liege of the German emperor, Boleslav defeated Henry V in the same year.

By his second wife, Salome von Berg-Schelklingen, Boleslav had 14 children, some of whom continued the family tradition of carrying silly nicknames. Boleslav IV the Curly and Mieszko III the Old spring to mind. In his testament, Boleslav III divided his lands among four of his sons, providing that the eldest would have supreme power. This didn’t last long, and Poland descended into centuries of feudal fragmentation and German encroachment. 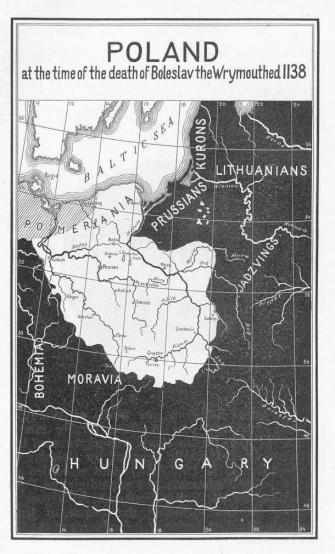 This map, suggested by Benjamin, was produced by Edward Henry Lewinski-Corwin for The Political History of Poland, published in New York in 1917.