With the eyes of the world turning toward the Korean peninsula for the Pyeongchang Winter Olympics, North Korea remains a hot topic in international affairs. It was a special focus of President Trump’s State of the Union; the White House recently pulled its choice for Ambassador to South Korea very late in the process for allegedly not being hawkish enough towards Pyongyang; and there is continuing conversation about whether the United States will attempt a “bloody nose” strike against North Korea.

The Olympic Games may provide a pause in the diplomatic row between North Korea and the United States over the former’s nuclear weapons and ballistic missile programs, but what is likely to happen once the Olympic torch is extinguished on February 25th? Will we return to what we had before—heated rhetoric and dangerous saber-rattling? Or worse, will the United States attempt to break the impasse through military action?

Prediction is a fool’s errand, but the best guide to understanding what the future might hold for any international relationship is to look at the core interests of the states in question and how those interests interact. This view suggests we are in for some bumpy times ahead. There is always going to be strife, and even threat of war, so long as two conditions are present: the Kim regime considers nuclear weapons (and the means to deliver them) vital to its survival and the United States believes it cannot live with a nuclear North Korea (and rely on deterrence to keep us safe). 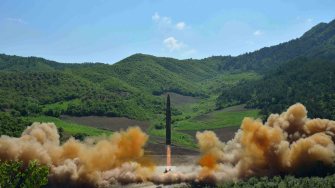 This picture taken and released on July 4, 2017 by North Korea’s official Korean Central News Agency (KCNA) shows the test-fire of the intercontinental ballistic missile Hwasong-14 at an undisclosed location. North Korea declared on July 4 it had successfully tested its first intercontinental ballistic missile — a watershed moment in its push to develop a nuclear weapon capable of hitting the mainland United States. (AFP PHOTO / KCNA VIA KNS)

Kim Jong Un has few good cards in his hand, but nuclear weapons are trump cards making it much harder for any country to attempt Kim’s ouster. He’s surrounded by richer and stronger neighbors while facing the hostility of the globe’s superpower. He needs those weapons.

Thus, North Korea simply is not going to denuclearize peacefully, regardless of whether this is the goal of American policy. That is not going to happen. North Korea witnessed what happened to leaders in Iraq and Libya when they ran afoul of the United States but did not have the means to punch back with devastating consequences. Kim can see what has happened to Ukraine since it surrendered its weapons without credible promises of security. There is nothing quite as effective as nuclear weapons for convincing others to sober up and tread cautiously. And Kim can guess the United States might not tolerate his regime without them.

As for the United States, it has staked out a pretty tough position: North Korea must denuclearize and end its ballistic missile program. No compromises.

As long as both North Korea and the United States maintain these contradictory goals, it is hard to see how this ends well. Something is going to have to give.

Most likely, the United States will be forced to flinch on denuclearization—unless it is truly willing to unleash the dogs of war and the attending horrible consequences. Should the United States swerve, the question is whether a deal could be struck on missiles and testing so that the U.S. could have partial satisfaction. Fortunately, even if the United States gets nothing, it can still rely on deterrence, a perfectly acceptable fallback position that served it well during the Cold War. 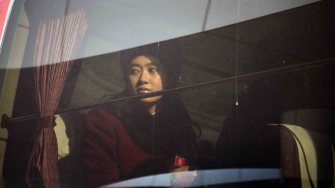 A North Korean cheerleader sits aboard a bus as their convoy arrives at the Inje Speedium resort complex, where they are staying during the Pyeongchang 2018 Winter Olympic Games on February 7, 2018. More than 200 young North Korean women arrived in South Korea to root for athletes from both sides of the peninsula at the Winter Olympics. (ED JONES/AFP/Getty Images)

Right now, neither concessions nor war seem imminent. After North Koreans march with South Koreans at the closing ceremonies, North Korea will likely resume testing. It will want to improve its capabilities and signal these to the Americans. The United States will naturally respond with tough rhetoric and continued pressure. But we probably won’t see even a limited strike in the short-run. As Josh Rogin of the Washington Post recently reported, “The Trump administration’s North Korea policy of applying maximum pressure with the aim of creating the conditions for negotiations, as was decided in a thorough interagency review and approved by the president last spring, has not changed.”

Moreover, the logic of a “bloody nose” strike is strained, and the consequences undesirable to say the least. Victor Cha, the ambassadorial pick pulled from consideration, went right to the heart of the problem in noting, “If we believe that Kim is undeterrable without such a strike, how can we also believe that a strike will deter him from responding in kind? And if Kim is unpredictable, impulsive and bordering on irrational, how can we control the escalation ladder, which is premised on an adversary’s rational understanding of signals and deterrence?”

Therefore, the United States must either accept that Kim can be a rational actor—which undermines the rationale for military options other than deterrence—or admit that a strike won’t necessarily lead to predictable North Korean behavior and controllable results. My friends, it appears we are at an impasse. Stay tuned.

By studying the dwarf galaxy Wolf-Lundmark-Melotte ~3 million light-years away, JWST reveals the Universe’s star-forming history firsthand.
Up Next
The Present

How refugees have the power to change the society they join

What history can teach us about refugees.