If that’s the case, then you’ve experienced something called the “flow state.”

The idea of flow has been around for millennia. The Taoist concept of wu wei, or effortless action, is very similar to flow, as well as Aristotle’s idea of eudaimonia, or the state of possessing a “good spirit.” However, this ancient concept has only recently been empirically studied and characterized.

Psychologist Mihály Csíkszentmihályi (pronounced me-high chick-sent-me-high) first studied flow states in the 1970s. The experiences of painters such as Michelangelo inspired him to study the phenomenon, which he defined as “being so involved in an activity that nothing else seems to matter. The ego falls away. Time flies. Every action, movement, and thought follows inevitably from the previous one, like playing jazz. Your whole being is involved, and you’re using your skills to the utmost.” It’s an absorbing, intrinsically rewarding state that we enter when performing certain tasks. 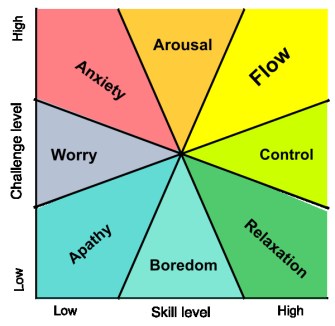 What’s the flow state about?

Painting, for instance, is a great task to induce to the flow state. It’s clear when a painting is finished, it’s clear how well one is doing, and, if the painter has talent, the act of painting can be satisfyingly challenging.

When in the flow state, an individual experiences intense focus and concentration on the present moment. Their actions and awareness merge, so that it seems like the task is almost performing itself. Despite this, there’s still a sense of personal control over the task at hand, and performing it feels intrinsically rewarding. It’s a sublime experience that many people spend their lives in pursuit of, and it’s the practical manifestation of the phrase “find a job that you love, and you’ll never work a day in your life.”

Almost everybody experiences flow at one point or another during their lives. While about 15 percent of people report that they never experience flow, some lucky few have been found to have an autotelic personality, or a propensity to seek out and experience flow. Based on the Big Five personality traits, autotelic people tend to score high in extraversion and conscientious and low in neuroticism and agreeableness. This last feature may seem odd, but autotelic people’s low agreeableness has more to do with a certain arrogance and self-centeredness — the personality of the “cantankerous creative” — than with outright hostility towards others.

For the rest of us, however, flow is something we need to relentlessly pursue. In utilitarian philosophy, the paradox of hedonism states that pursuing happiness directly does not yield happiness; rather, happiness is a byproduct of performing work and activities that we love to do — in short, performing the intrinsically rewarding tasks that give us flow. This isn’t just in the realm of philosophy either; there’s empirical evidence that experiencing flow increases positive sensations and emotions.

Arguably, the most important criteria in the pursuit of flow is to pick the right task. Many things that we seek out in our leisure time — such as watching TV — don’t really provide us access to the flow state. Instead, tasks that are likely to encourage flow tend to have high consequences (e.g., rock climbing or public speaking), clear feedback, and take place in a rich and varied environment (so not your office cubicle). Steven Kotler, co-founder of the Flow Genome Project, identified several flow “triggers” that make entering the flow state more likely. To hear him describe these triggers and how to achieve flow, check out the video below.

Are psychopaths cold-blooded murderers? Not usually.
Up Next
Hard Science

Follow along as the InSight spacecraft crosses millions of miles to the red planet.