Olivia "Liv" Boeree is a poker player, TV presenter and model from England who won the 2010 European Poker Tour in Sanremo. Born in Kent, Boeree studied at Ashford School[…]
Go to Profile 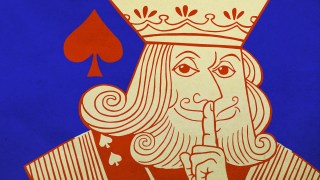 How to tell if someone’s bluffing: body language lessons from a poker pro

Want to predict someone's next move, or know if someone is telling you a lie? Learn to read body language like a poker pro.
▸
4 min
—
with
Liv Boeree

A good poker face can win you a fortune or help you sell a difficult lie, but that term might be leading us all astray. For poker champ Liv Boeree, calling someone’s bluff isn’t about their face at all, it’s often much more about their body as a whole—and one part in particular. “The feet are often the most reliable thing to look at on your opponent because they might be completely stoic in their face but their feet are bouncing around,” she says. We’re all hyper aware of our faces as a primary point of communication, but our bodies are speaking more loudly than we may realize. Typically, “the lower down on the body that you’re looking at, the more reliable the information,” she says. Keep in mind, reading body language is an art not a science, but thanks to Boeree’s years of experience at the poker table she highlights some classic behaviors of bluffers, and reliable strategies for those who want to call them out. Find more from Liv Boeree at www.livboeree.com.

Liv Boeree: When it comes to body language, it's never an exact art. The things I'm going to suggest, they're all guidelines. But that said there are some certain things that as a poker player I'll look for. And the most important thing is, first of all, to get a baseline of somebody. It's impossible to tell whether the behavior someone is showing is meaningful or not if you don't know how they naturally behave. So the first thing I'll do when I sit down at the table is look at what my opponents are doing when they're not in a hand: are they naturally quite gregarious, are they confident when they interact with the waitress, or are they naturally quite quiet and shy? How do they sit? Are they naturally closed off? Are they very languishing”—that kind of thing?

And once I've got an idea of their baseline outside of a hand then I look to see how they deviate from that when they're actually in the middle of playing or in a tense situation. In general what you want to look for in both poker—but also when you're trying to figure out if someone is lying—is their comfort level, if they seem authentic. As a rule of thumb, humans are actually quite good at picking up authenticity or if someone is being disingenuous. So that's the thing to look out for, and there are some like classic behaviors that I've noticed people do at the table where—if you see them suddenly making a point of making themselves bigger, where they're naturally sitting like this and now they're sort of puffing up, that's more often than not a false confidence that they're trying to show. Most people do try to stay very constant. So you really do notice a behavior, particularly against someone who seems to play quite regularly, the chances are that they're aware of their behavior, so they're probably trying to mislead you.

But another rule of thumb that I like to follow is: the first thing you learn as a kid, usually, when you lie is “liars won't look you in the eye,” so what do kids do to overcompensate? They'll look you in the eye. And similarly people are very aware of their faces, this part of their body, if they're trying to be dishonest, but what they're not thinking about is the rest of their body. So the lower down on the body that you're looking at, the more reliable the information is.

So if you think about when you're excited about something, generally speaking you'll bounce around and you can't keep still, and we call it “happy feet” in poker. The feet are often the most reliable thing to look at on your opponent because they might be completely stoic in their face but their feet are bouncing around—it's usually a sign that they have a really strong hand. But similarly if they're sort of smiling and chatty but their feet all of a sudden tuck themselves around the table or around the chair legs, something's up there. So as a rule of thumb, look for the rest of someone else's body more than their face if you're trying to figure out if they're telling you the truth or not.

The evolution of comic books: From “mentally deficient” to brain boosting