Creativity requires a high degree of patience and the emotional willingness to fail. The status quo exists for a reason: everyone can partake, while it doesn’t challenge norms or exceed expectations. Stretching yourself out, regardless of discipline or craft, means putting yourself on the line. Fortunately, there are steps that can help live a more creative life.

Below are four examples offered by neuroscientists and psychologists to inject more creativity into whatever it is that you’re doing. A mindset switch, the ability to turn things over and look from different angles, is often required. While imagination is necessary, so is discipline, self-control, study, and the fortitude needed to drift far from your comfort zone.

Nothing groundbreaking is achieved by sticking with what’s comfortable. A path must be forged before others follow you through the dark forest. These four suggestions might just provide a guiding light.

Creativity Is The Most Logical Process There Is

Creativity Is The Most Logical Process There Is

For as much talk as there is about portending the future, we often default to convenience. For example, despite broad awareness of privacy issues on Facebook, the site remains the go-to portal for advertisers, with $16.6 billion in revenue generated in 2018.

Hence, a longstanding biological contradiction: we want innovation yet we’ll default to the status quo. To inspire creativity, however, we need to look at where trends are heading, not where they are. There’s always historical precedent to draw from; trends are not created in a vacuum. This is why studying history is so pertinent for creativity. By understanding what previously led to what, you can stare at the current landscape to predict what’s next.

As neuroscientist Antonio Damasio writes in The Strange Order of Things, recalled images are the “essential for the construction of narratives,” which in turn foster the imagination, what he terms “the playground for creativity.” What we commit to memory is more about predicting the future than being simply a repository of experiences. There would be little biological utility in recalling the past for no further usage. As memory research has shown, the same neurological circuits used to remember also predict.

As Damasio writes, “It is reasonable to say that we live part of our lives in the anticipated future rather than in the present.” Forecasting is not confined to science fiction. It can be stitched together for any creative purposes, provided the mind that envisions it is willing to risk the wager of prediction.

In various traditions, students are required to mimic their teachers until the day comes when they “graduate” and become teachers. The point of mimicry is to understand the foundation until they comprehend the tradition from the inside out. Only then can they be creative with the lessons and evolve the tradition. Creativity without foundation is impossible.

As Oliver Sacks writes in The River of Consciousness, all humans and many animals mimic their forebears; that’s how they learn the rules of the game. One of the most important aspects of mimicry is play, which he calls “at once repetitive and imitative and, equally, exploratory and innovative.” Play is pleasurable and instructive, as it teaches boundaries and anchors children with knowledge. This lesson is not limited to children, but applicable to adults of any age.

Imitation requires patience, a quality in short supply in the digital age. Yet the benefits are enormous. Mastery of a craft is unlikely unless a requisite amount of time is devoted to it, which requires apprenticeship. When the student becomes the teacher—context is relative, as good teachers are always students in some capacity—the knowledge becomes unconscious, woven into the fabric of being.

As Sacks notes regarding his own discipline, his personality and neuroses are transcended when writing creatively, which he concludes, “It is at once not me and the innermost part of me, certainly the best part of me.” 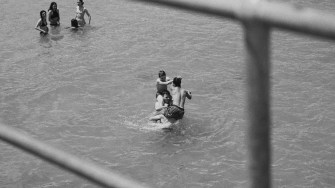 Photo by Nicholas Jeffries on Unsplash

All of our minds wander; it’s a large part of what they do. Yet the Age of Distraction has killed this wonderful feature. Instead of sitting around letting thoughts roam freely, we stare into a screen as a means of fending off boredom. Boredom, though, can be a wonderful—some, such as professor emeritus of psychology, Michael Corballis, would say necessary—aspect of being human.

In his book, The Wandering Mind, Corballis agues that mind wandering, the brain’s default mode network, is fuel for the creative imagination. By allowing your mind to wander, you open the door to randomness and novelty, both essential for breaking through the status quo and discovering new pathways forward. Corballis explains this beautifully through animal migration, which until relatively recently was an essential aspect of human navigation:

“Moving animals are disposed to wander through space. Sometimes they do so in goal-directed fashion, taking the well-trodden route to the watering hole, or the traffic-snarled road to work. But sometimes they just roam, exploring new territories, or perhaps wondering as they wander what’s around the next bend. This too can lead to evolutionary change.”

In her book, Mind in Motion, Stanford emeritus professor of psychology, Barbara Tversky, discusses a study she conducted with two expert and seven novice architects. Based on sketches of a museum on a hillside, she observed that novice observations relied on perceptual relations while the experts dealt with functional relations.

The key: experts see relationships between design elements even though they’re not explicitly represented, while novices generally work only with what is presented on paper (or, as is popular in this cohort, cocktail napkins).

“Ambiguity turns out to be key to creative thinking because it allows, even encourages, reinterpretations,” she writes. By looking at the general landmarks, creative experts can then infer a variety of possibilities.

This trait is not limited to architects or even visual artists; Tversky mentions chess, engineering, and music, though the field is limitless. Detail is important in every craft, but when the foundation is more broadly presented this allows the creative expert to insert numerous possibilities. The only limitation, as with all creative thinking, is your imagination.

What value does wit hold in genres defined by brute strength?
Up Next
The Present

Vodka for your post-apocalypse wingding

It’s made from Chernobyl water and rye. What could possibly go wrong?