If you live in the United States or Canada, you’ve likely heard the term ‘Freshman 15’. In my day it was referenced as the ‘Freshman 10’, but weight trends continue to tick upwards. A half-world away, in Australia and New Zealand, the weight gain high school students experience in their college transition is referred to as ‘First Year Fatties’ or ‘Fresher Five’, their arbitrary weight gain being measured in kilograms.

The reason for this trend is attributed to multiple factors: stress, lack of sleep, alcohol, carbohydrate- and sugar-rich cafeteria food, lack of exercise. Whatever the reason, or myriad reasons, hopefully the student gets on track by year two and finds a healthier rhythm.

This is not the only time in life in which weight just seems to add up. A new study published in PLOS One tracked 15,001 Australian adults over a decade to discover the reasons why individuals in relationships are more likely to be overweight or obese—or simply put on a few.

A team led by Stephanie Schoeppe, at the Central Queensland University in Australia, crunched the data of volunteers between the years 2005-2014 and discovered a paradox: even though people in relationships tend to live healthier lifestyles, each partner tends to gain weight. 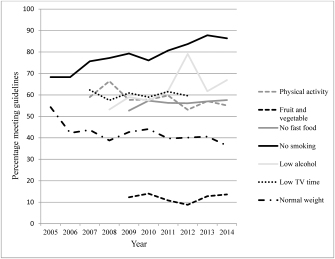 Couples, they discovered, smoke less, eat less fast food and drink less alcohol, and watch less television. Yet overall they weigh more than single volunteers. Even with this self-reported data, though, the authors write:

That is, while they’re consuming less junk than single individuals, by engaging in these activities together they’re likely loosening their own self-imposed rules, allowing them to binge more and focus on health less. This is slightly counterintuitive, given that couples tend to want to live longer in order to spend more time with their partners.

Couples are also out of the dating pool, where putting your best foot forward is essential. An emphasis on physical shape and healthy lifestyle behaviors is an evolutionarily beneficial tool for singles. As Schoeppe says:

When couples don’t need to look attractive and slim to attract a partner, they may feel more comfortable in eating more, or eating more foods high in fat and sugar. When couples have children in the household, they tend to eat the children’s leftovers or snacks.

The length of time one has been in a relationship also matters. Cohabitating for over two years seems to be when the pounds start to add up. 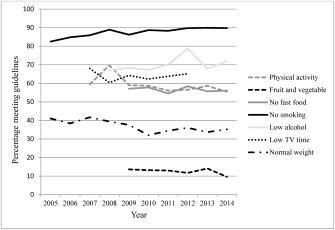 There are a number of factors not included in this survey, such as the quality of the relationship. Happier couples tend to endure stressful times together instead of stressing one another out. Elevated cortisol leads to weight gain; if the relationship isn’t working out, that could contribute to packing on pounds.

Still, one trend in relationships that’s booming is fitness. One adage goes, “couples that sweat together, stay together,” a trend that I can attest to, having worked at Equinox Fitness for the last 14 years. Couples that exercise together inspire one another, whereas I’ve talked to a number of members whose partners do not exercise. While not causation, I’ve noticed a definite correlation with dissatisfaction in these situations.

Inspiring one another, in a relationship or simply by staying healthy and influencing friends, is an important step in curbing our obesity epidemic. Couples that work out together might feel justified in “cheating” after dinner, which is not how our bodies work: diet is more relevant to weight gain than exercise. You can’t “burn off” calories in the way the myth goes.

The researchers recognize that everyone faces their own issues in an age of constant entertainment distraction and unhealthy foodstuffs on offer at every turn. They conclude:

These findings suggest that health behaviour interventions are needed in both singles and couples, but relationship status needs to be considered in interventions targeting alcohol, fast food, smoking and BMI.

If you really love your partner and want to spend more time with them over the long haul, it makes sense to inspire one another in every sense of the term. That might mean fewer pints of ice cream or slowing down on the vino, but the reward is worth the sacrifice.

Related
Life
Our antidepressant drugs are affecting animals and ecosystems
A toxicologist explains the impacts of antidepressants on fish — and no, they’re not getting any happier.
The Past
Ancient migration: Bering Strait land bridge from Asia to North America was not a one-way road
Ancient humans crossed the Bering Strait land bridge from Asia into North America. But some of them went back.
Sponsored
Want to boost your happiness? Buy experiences, not material possessions
Some experiences even continue to pay dividends time and time again.
High Culture
Did Paul Cézanne hide an early self-portrait underneath a 160-year-old still life?
To answer that question, we may have to figure out when the famed painter started to go bald.
Strange Maps
Dutch government releases a genuine treasure map from WWII, sparking a hunt for the loot
X marks the spot. The Dutch town of Ommeren has been swamped by detectorists armed with shovels looking for $20-million treasure.
Up Next
Starts With A Bang
No, Comet Tails Don’t Make Meteor Showers
It’s time to bust one of the biggest myths about where the night sky’s most spectacular, seasonal shows come from.Meteor showers are one of the night sky’s most spectacular sights whenever […]