To: CEOs of BigAgTech Re: Labeling of GMOs 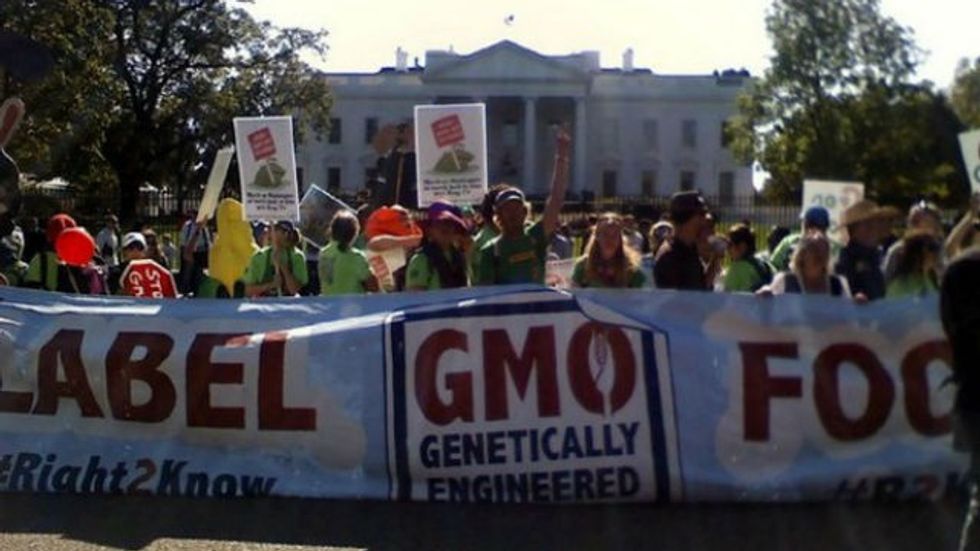 The vote in Washington requiring labels for foods with GMO ingredients is coming up. You’ll lose. Even if you win the vote, you will lose the war…because the war isn’t about labeling. It’s about the public’s lack of trust in you, and therefore their opposition to the technology that is so important to your success. Your company’s opposition to labeling is hurting you far more than it’s helping. It is time for a new approach.

Let me offer a bit of advice. You are culturally rooted in the hard sciences of biology, toxicology, etc., so you may not be aware of what the social sciences reveal about the way people perceive risk. But there is ample research about the cognitive psychology of risk perception to suggest that changing tack and supporting labeling could be the single most effective step you could take to build acceptance of this technology. Yes, acceptance, which could make you boatloads of money, and provide great benefits to society (which is why I’m happy to offer this advice at no charge.)

Right now you are suffering the common corporate malady of Fear of Fear. The chance that a label like “may contain genetically modified ingredients” could scare away even one end-consumer, has frightened you into opposing such labeling. Your direct customers, the farmers who grow the food and the food companies who sell it, are even more afraid of this consumer fear than you are. The Fear of Fear is common. It seems to make sense. And certainly you and the food production and retail industry are right to some degree. Such labels almost certainly will scare some people away.

But the Fear of Fear has locked you into a myopic defensiveness blinding you to realities about how people respond to risk, psychological and cognitive realities that suggest that a change of tack on labeling may be far better for you, and acceptance of biotechnology, than you think.

You don’t need research to tell you that people take risks all the time. Knowingly. What the risk perception research has found is that the ‘knowing’ increases the likelihood they will take the risk in the first place. Engaging in a potentially risky behavior, knowingly and voluntarily, makes the potential risk feel much less scary. This is the underlying psychological reason why the idea of labeling has so much popular support, and is almost certain to become law despite the millions you are spending to forestall the inevitable. We all want CHOICE over the risks we may face. You do too. CHOICE makes risks feel voluntary. It makes us feel empowered, more in control of our health and safety, and that makes any risk feel less scary. Time and time again, when people are given choice – as labeling would do – their fears are reduced and they engage in risks they fight tooth and nail when the risk feels imposed.

Many people will be willing to buy products containing GMO ingredients if they are openly labeled. And acceptance will grow over time as people become familiar with the label and pretty much forget it’s there (despite the efforts of your opponents, whose opposition will be undercut by your change in position), another aspect of cognitive psychology that supports labeling in the name of increasing acceptance of GMOs.

Evidence this works comes from an issue closely analogous to yours, food irradiation. Companies have to label products - like ground beef - as irradiated, so most don’t sell it, afraid of the fear the label might cause. But grocers that do, under their own store brands, like Wegmans and Schwan’s and Omaha Steaks, say clearly labeled irradiated beef sells fine. By offering choice the label fosters acceptance!

But there is an even more powerful argument from cognitive psychology research why supporting labeling is in your corporate best interest, and it is about the pivotal importance of trust. The fear of GMOs has little to do with the science behind the actual safety of the product, the ground on which you keep fighting your battles. That approach misses the actual front lines of the war. To a large part this fight, and public apprehensions about GMOs, are about trust. If we don’t trust a company or an industry producing something that may involve a risk, we will fear that risk more (all the moreso if the risk feels imposed). Nothing personal here, but we don’t trust you.

Nor should we. Your entire raison d’etre is profit. It is your legal duty to shareholders to maximize profit. That means you are on your side, not ours. That’s not evil. It’s not your fault. It’s just how it is. And, sorry, but various members of your industry have done various things over the years that suggest your companies are willing to place corporate self-interest above public and environmental health and safety. So no, we don’t trust you, and that mistrust heightens our fears of your products and the processes you use to make them.

Fighting labeling, denying people choice, feeds that mistrust. It sounds…it IS…defensive…self-protective…not really about our health and safety, which you so adamantly argue is not at risk from GMOS, but the safety of your profits. But that is precisely why the focus of the GMO battle on labeling has given you the most dramatic opportunity in years to advance the application of this vital, valuable, and yes, safe technology (according to all the most prestigious independent science and research organizations in the world.) Nothing you could do, and certainly nothing you could say, would have as great an impact on public trust as changing your position and supporting labeling. A sincere investment of corporate money and influence to support labeling and really fight for it – not just some easy greenwash PR only stating support for labeling - could have a huge positive impact on public sentiment toward GMOs.

It would demonstrate your belief that “It’s safe and we have nothing to hide.” It would acknowledge people’s concerns, respect the public’s feelings. A dramatic and sincere shift to support GMO labeling will demonstrate that you are not being purely defensive and self-interested. It would significantly ease the “We hate GMOs because we hate Monsanto (i.e. Big Ag Tech companies)” mistrust that lies at the heart of this conflict. Not only would it encourage acceptance of GMOs, it might even help ease public mistrust in your company and industry, though that’s a bigger longer battle.

(A warning; you better be sincere about the shift and supportive of intelligent done honest labeling, ready to invest as much money and corporate influence supporting it as you have spent to fight it. People will be rightly suspicious of your shift and trust is a fickle ally, ready to turn back into an even bigger enemy if it is betrayed.)

Farmers, your customers, may not like your change. Food manufacturers, paranoid with Fear of Fear, certainly won’t (which is too bad, because they stand to profit handsomely by the acceptance of GMO products too). You’ll have to be ready to face those conflicts. It won’t be easy.

And it will take courage and foresight to think outside your engineering and scientific and technological culture, to look past the understandably cautious advice of your lawyers, and to get beyond the defensiveness that being attacked naturally provokes. Taking the other side’s position will be hard. But there are powerful reasons why this is in your overall best interest, reasons grounded in robust science, even if that science isn’t the kind you’re familiar with. Please consider support for labeling, intelligently done of course, in order to defuse resistance to GMOs and encourage their acceptance; for your profits, and for the deployment of a technology that an ever-more crowded and climate-change threatened world badly needs.