Genetically Modified Food. One Step Closer to Your Plate. 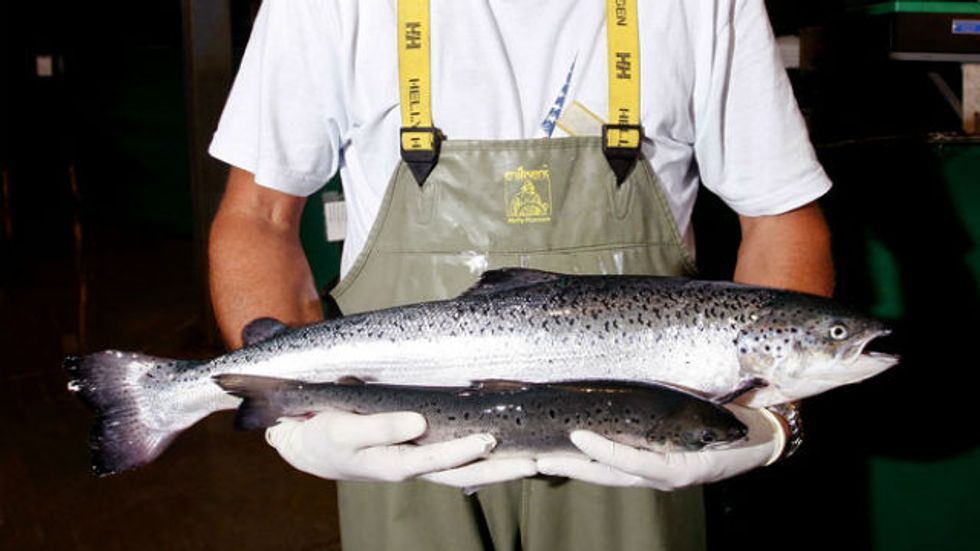 You may have missed it, but on the Friday heading into the Christmas holiday, the FDA announced its decision about the safety of salmon genetically engineered to grow faster. After reviewing more than a decade of research, the FDA says the fish are A) safe for human consumption and B) would have “no significant impact on the environment.” This is a pretty big deal, close to the final approval for the first genetically modified (GM) food we would eat directly, as opposed to the GM grains that have been mixed into other foods for years.

Sure enough, the anti-GM folks reacted with almost knee-jerk predictability. The Center for Food Safety charged that the Obama administration ‘snubbed’ the risks, saying; “The G.E. salmon has no socially redeeming value. It’s bad for the consumer, bad for the salmon industry and bad for the environment. F.D.A.’s decision is premature and misguided.” Which, given how much research backs up the FDA decision, is the same sort of denial of science the right wing uses to contort itself into denying climate change. But then, the arguments about GM food, as is the case with climate change or any risk, are not just about the facts, but how those facts feel.

The facts here are reasonably clear. Scientists take a gene from a Chinook salmon, which grows really fast, and plug it into an Atlantic salmon, which is the principal salmon species sold today but which grows more slowly. Then they add a gene from another ell-like fish called the ocean pout that keeps the Chinook growth gene firing all the time, and, presto, you get the Atlantic to grow to maturity much faster. It’s basically a modified hybrid salmon but hybridized in a lab rather than the old fashioned way, in a fish tank. More than a decade of research reviewed by the FDA says its safe to eat. And the GM fish are grown from eggs that grow into sterile female fish, so if they get out they can’t mate and proliferate, which is why the FDA says they would not be an environmental risk.

The reasons why genetically modified food upsets people are pretty clear too. Research on the psychology of risk perception has identified more than a dozen characteristics that make some things feel scarier than others, several of which apply to the genetically modified salmon. It’s human-made, and that makes it scarier than a risk that’s natural (naturally hybridized food). We’re more afraid of what we can’t detect with our own senses, and what we don’t understand, creating uncertainty that leaves us feeling powerless, and more worried. We more afraid of a risk if we’re exposed involuntarily (which is why opponents of GM food demand labeling). And we depend on the government to keep us safe, but if we don’t trust the government (the FDA), that lack of trust feeds greater worry.

On top of that, research into Cultural Cognition has found that we shape our views so they agree with the common opinion in the groups we most strongly identify with, and environmentalists usually belong to groups called Egalitarians and Communitarians. Egalitarians don’t like a society that is controlled by a “One Percent” of a few rich companies and individuals that dictate a fixed ‘traditional’ hierarchy of social and economic class, limiting  freedom and social and economic mobility for “the 99%”. Communitarians prefer a society that sacrifices some individual freedoms for the greater common good. They don’t like a society that allows a few big companies to get rich while polluting the world for everybody else.

Cultural Cognition research helps explain Brian Dunning’s Argumentum ad Monsantium, the way environmentalists oppose genetically modified food not on the merits alone but because it is the profit-making product of a huge polluting corporation that has too much control over society.

As valid as those emotional risk perception filters may be, and as scary as they might make GM food of any kind feel, they have nothing to do with the facts about the safety of the GM salmon to humans or the environment. The FDA is supposed to try to make a ruling based on objective evidence, which their scientific report does. But we live in the real world of public passions and politics, which explains why that report was issued last May but,  according to a report by Jon Entine in Slate last week, was kept quiet under orders from the Obama White House for fear of offending environmentalists during the election campaign. Entine claims his expose forced the FDA to go public.

It wouldn’t be the first time that public passions and politics about an emotionally controversial risk issue interfered with the objective consideration of science. But we live in a democracy, and the way a risk feels is as important, often more important, than the science as policy makers try to decide what to do. As a result, what we end up with, whether it’s genetically modified food or so many other risk-related issues, is a decision making process that may feel democratic and right, but in the end it might not produce polices that provide the most public and environmental benefit.