The outcry about George W. Bush's visit to a group wanting Jews to believe in Jesus is much ado about bubkus. 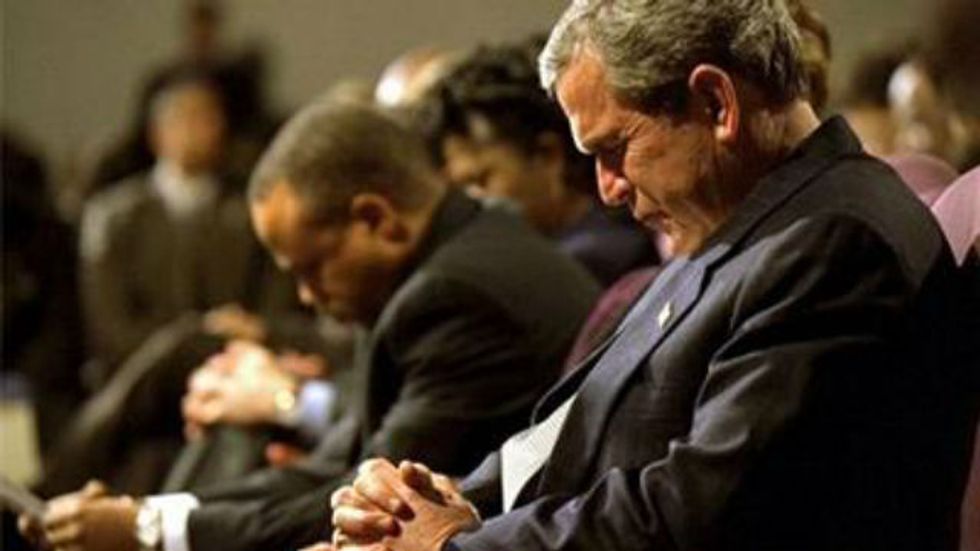 Rachel Maddow of MSNBC has been incredulous all week about George W. Bush’s decision to speak at a fundraiser of a Christian evangelical organization that seeks the conversion of Jews. “Why on Earth would he be doing this?” Ms. Maddow asked rhetorically on her Monday show of his Nov. 14 appearance at the Messiah Jewish Bible Institute (MJBI). “And who told him this was a good idea?” It is appropriate for former presidents to “devote themselves to good works of the fairly noncontroversial variety,” she said, not to “raising money to convince the Jews that Jesus is the messiah in order to bring about the second coming and rapture.” The latter, she argued, “is weirding people out just a touch. Especially the Jews.”

The MSNBC host is indeed not the only person piqued by Bush’s support of the Messiah pushers. David Wolpe, a prominent American rabbi, calls the visit “infuriating” while Rob Eshman complains in the Jewish Journal that Bush “is helping to raise money for a group whose reason for being is to stop there being Jews.” Eshman explains why this is such a big deal:

For Jews, there is no Father and Son; there is no Trinity: there is only Unity. One. That is a mindset with vast implications for how Jews see the world and behave in it. God is ineffable, certainly not a man, and God’s power lies precisely in that mystery. We accept that the biggest piece of the puzzle is left unsolved — that missing piece is the engine of our spiritual journey. It makes us, as individuals and as a People, inquisitive, skeptical of authority, relatively tolerant, empathetic — for if God is One, we’re all in this together — and eternally dissatisfied.

That’s why when we start believing in Jesus as God, we stop being Jewish — not just in name, but deep down, in our souls.

I understand why some Jews might find it off-putting to know that a former president is throwing his weight behind an organization that seeks their conversion. It’s a trifle awkward to tell your friends you want them to change their religious beliefs to fall in line with yours. But to condemn Bush for giving a talk at this fundraiser is to throw a tantrum over a triviality. The MJBI has a constitutionally protected right to proselytize. Eshman’s theological discourse is beside the point: in explaining the traditional Jewish stance about Jesus, he is stating the obvious and ignoring the equally obvious: that the folks of the MJBI fundamentally disagree. So in his capacity as a private citizen and as an evangelical Christian, George W. Bush is fully within his rights to support a group that supports the conversion of non-Christians.

Lost in the debate over Bush’s visit is a distinction pressed by John Locke in his Letter Concerning Toleration from 1690. While it should be forbidden for a state to compel individuals to believe anything, Locke wrote, it is perfectly legitimate, even laudable, for people to attempt to persuade their fellows to join their flock:

In teaching, instructing, and redressing the erroneous by reason, he may certainly do what becomes any good man to do. Magistracy does not oblige him to put off either humanity or Christianity; but it is one thing to persuade, another to command; one thing to press with arguments, another with penalties. This civil power alone has a right to do; to the other, goodwill is authority enough. Every man has commission to admonish, exhort, convince another of error, and, by reasoning, to draw him into truth; but to give laws, receive obedience, and compel with the sword, belongs to none but the magistrate. And, upon this ground, I affirm that the magistrate's power extends not to the establishing of any articles of faith, or forms of worship, by the force of his laws.

Exhortation, teaching, instructing and redressing the purportedly erroneous Jews is, as Locke correctly pointed out, no sin. Nor is it a breach of decency. From the perspective of so-called messianic Jews, it is an act that will secure eternal salvation for Jews and perhaps even the rapture for all of mankind. When Maddow mocks Bush’s visit to the organization, she is mocking the belief that conversion of the Jews will pave the way for the Second Coming. Which is to say, she is singling out some religious beliefs for calumny. That’s her right, of course, but it should be clear what she is combating: a former president’s apparently genuine religious belief.

The odd vehemence from many corners of the Jewish community is reminiscent of Elie Wiesel’s reaction to revelations in recent years that Mormons were posthumously converting dead Jews. To perform conversion ceremonies on Jews who had passed away, including Holocaust victims, was “scandalous,” Wiesel said. But it is an impossibly strange move to object to such a practice unless Jewish leaders actually believed Mormons were capable of signing up once-alive Jews for their church. The louder you complain, the more credence you give to the metaphysical claims of the posthumous converters. Ignoring them seems more sensible.

Similar advice would hold for the case of George W. Bush and the Jews for Jesus. The bitterness aired by Maddow and by a number of influential Jews is over the symbolism of Bush’s visit, not over any expected impact on the Jewish community. There is little evidence that appeals to Jews to accept Jesus bear much fruit despite prodigious leafletting; the messianic Jews seem to have more luck convincing Christians to Judaize themselves. So there is no worry that America’s Jews are a people at risk of accepting Jesus en masse. Bush should feel free to speak to pretty much whomever he wants. He isn't advocating violence or forced conversions. The man isn't standing for election again. There is no reason for him to advocate for merely "noncontroversial" causes. And American Jews have soul-searching to undertake that has nothing to do with incursions by a fringe group of Christian evangelicals.