In an interesting example of the often Kafkaesque irrationality of the war on drugs, figures obtained by Releaseshow that in the UK you are now far more likely to be prosecuted if you are caught carrying Class B or Class C drugs such as cannabis or benzodiazepines, than if you are found carrying class A drugs such as ecstasy, LSD, or cocaine, that the government considers to be more dangerous. 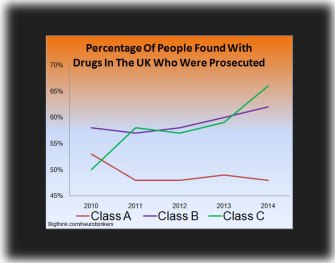 The explanation offered by Release, is that this is yet another example of discriminatory policing: “Police may discriminate against people further down the social scale. The most commonly seized class B drug is cannabis, popular among students, the unemployed, and the poor. Class A drugs such as cocaine, by contrast, have a following among bankers, journalists, and politicians, whom officers may decide to wave on.”

Another possibility is that the police are beginning to understand that when it comes to drugs, the law is irrational. Psychedelic drugs that are placed in the Class A category alongside crack cocaine and crystal meth, can be far less harmful than even legal drugs such as alcohol and tobacco. That’s according to an analysis by the British Government’s very own former chief drugs adviser: professor David Nutt, published in The Lancet.  That was in 2010, a year after he was fired from the government’s advisory council on the misuse of drugs for publishing an analysis in the Journal of Psychopharmacology that concluded that taking ecstasy (a Class A drug) is less dangerous than horse riding.

Perhaps a growing number of police simply don’t want it on their conscience that they have ruined someone’s life forever for a crime that may be no more harmful than sipping on a beer at the end of their shift or an activity their daughter might partake in every single Wednesday after school.

Interestingly, while the rate of prosecution for people caught with cannabis has gone up, over the same time frame, the overall number of prosecutions for cannabis has sharply declined, even though rates of use have remained stable. This trend is something that the police publicly attribute to a decline in stop and search due to funding cuts. It could also be explained by a majority of police acting on their consciences and simply turning a blind eye and not making a record of encounters at all. Those remaining officers that witness relatively benign drug use and still bother to actually write it down may be becoming rare outliers, pushing up the on-paper rate of Class B and Class C drug encounters that end in prosecution, while the overall rate tumbles.

There is no longer any doubt among experts that problematic drug use is something best dealt with by medical professionals rather than jail cells. If police are beginning to realize this then this can only be a good thing, however, we should be wary of the insidious risks of allowing laws to remain that can be enforced so arbitrarily. It is now time for the issue to be taken out of the hands of the criminal justice system for good, and not just for those drug users who the police happen to take a liking to.

Symbolic gestures often speak to our psyche in ways no rational action could ever speak to our intellect.
Up Next

Words like “comforting” and “reassuring” don’t seem sufficiently “sexy” praise for a literary work on this scale, but these are the only words to describe its effect (on this reader, at least).