Allegations that Supreme Court nominee Brett Kavanaugh sexually assaulted a woman in the early 1980s could halt a senate committee vote for his nomination, which is scheduled for Thursday.

His accuser, Christine Blasey Ford, came forward publicly on Sunday in an interview with the Washington Post. Ford, a clinical psychology professor at Palo Alto University in California, claims that Kavanaugh and a friend “physically pushed” her into a bedroom during a small gathering in suburban Maryland during the early 1980s.

Ford said Kavanaugh and his friend locked the door, turned on loud music and “tried to disrobe” her. She said Kavanaugh put his hand over her mouth, presumably to prevent her from successfully yelling for help.

“With Kavanaugh’s hand over my mouth I feared he may inadvertently kill me,” she wrote. 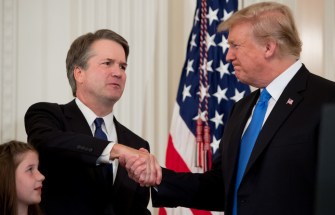 A possible delay of Kavanaugh’s confirmation

All 10 Democrats on the Senate Judiciary Committee, which is controlled by 11 Republicans, have called for a delay in the confirmation vote scheduled Thursday.

“Now that her story is public, it is even more important that we give the Bureau the time it needs to follow up,” the Democrats wrote in a letter to Republican Sen. Chuck Grassley of Iowa, the chairman of the committee. “All Senators, regardless of party, should insist the FBI perform its due diligence and fully investigate the allegations as part of its review of Judge Kavanaugh’s background.”

The Democrats need just one Republican objection to force a delay on Kavanaugh’s confirmation. Such an objection could come from Sen. Jeff Flake of Arizona, who said he wants to learn more about the allegations before the vote.

“I’ve made it clear that I’m not comfortable moving ahead with the vote on Thursday if we have not heard her side of the story or explored this further,” he told the Post.

Sen. Dianne Feinstein of California, the ranking Democrat on the Judiciary Committee, responded in a statement to the Post: “I agree with Senator Flake that we should delay this week’s vote. There’s a lot of information we don’t know and the FBI should have the time it needs to investigate this new material. Staff calls aren’t the appropriate way to handle this.”

Democrats hope to delay Kavanaugh’s confirmation long enough to prevent him from joining the high court in time for its fall term beginning Oct. 1 or even until the midterm elections in November, when Republicans could lose control of the senate.

How the allegations arose

In July, Ford first raised the allegations to her congresswoman, Democrat Anna G. Eshoo. Soon after, a letter detailing the allegations was sent through Eshoo’s office to Senator Feinstein.

“I felt guilty and compelled as a citizen about the idea of not saying anything,” Ford said.

Ford then contacted Feinstein directly about the allegations and requested to remain anonymous.

But news of the allegations spread quickly through Washington and then through the media. Last week, multiple outlets reported the general contents of the letter but didn’t publish Ford’s name. Feinstein released a statement:

“I have received information from an individual concerning the nomination of Brett Kavanaugh to the Supreme Court,” she said. “That individual strongly requested confidentiality, declined to come forward or press the matter further, and I have honored that decision. I have, however, referred the matter to federal investigative authorities.”

But Ford decided to break her anonymity, citing civic duty and inaccuracies in media reports as her reasons.

“These are all the ills that I was trying to avoid,” Ford told the Post. “Now I feel like my civic responsibility is outweighing my anguish and my terror about retaliation.”

Kavanaugh has “categorically and unequivocally” denied the allegations, saying he “did not do this back in high school or at any time.” The friend of Kavanaugh who was said to participate in the alleged incident, Mark Judge, also denied the claims.

“It never happened,” he told the New York Times. “I never saw anything like what was described.” Further, he said it did not match Mr. Kavanaugh’s character: “It is not who he is.”

Last week, Republican Sen. Chuck Grassley, the chair of the Senate Judiciary Committee, released a letter written by 65 women who said they knew Kavanaugh from their high-school days:

In August, Ford took a polygraph test administered by a former F.B.I. agent. The results, which were provided to the Post by Ford’s attorney, Debra Katz, a Washington lawyer known for taking on high-profile sexual harassment cases, reportedly indicated that Ford was being truthful about the allegations.

These cities are the hubs of Africa’s economic boom

What is the ‘pure carnivore diet’?

It’s all the rage right now after the Paleo and keto diet sensations took the world by storm. But is it healthy?