About half of Americans would support a Universal Basic Income for workers who lose their jobs to artificial intelligence, according to a new survey from Northeastern University and Gallup.

“It represents an enormous increase in support,” Karl Widerquist, an associate professor at Georgetown University in Qatar and an advocate for a Universal Basic Income, told CNBC. “It’s really promising.”

The specifics of proposed Universal Basic Income (UBI) programs vary, but all essentially call for the government to provide citizens a “social safety net” by sending them regular checks, regardless of employment or other income sources.

Americans might be split on the issue, but some groups clearly support UBI programs more than others. For instance, 68 percent of those who identified as Democrats in the survey said they’d support UBI, while only 28 percent of Republicans did. 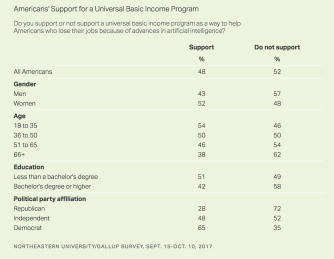 Americans’ support for UBI is split along other demographic lines, too. 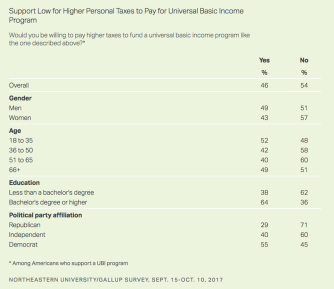 What most people seem to agree on, however, is that companies that benefit from developments in A.I. should fund UBI programs. 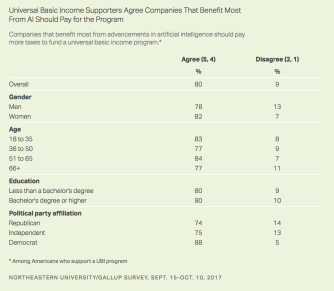 In European nations, support for UBI seems to be at comparable levels, as this graph from a 2016 European Social Survey report shows. 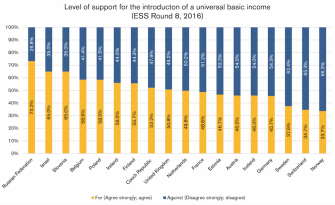 But should we actually expect a guaranteed income to improve the U.S. economy? After all, wouldn’t UBI encourage people to sit on the couch all day and wait for their next check?

“The claim is often made that if you give people a basic income, they’ll become lazy and stop doing work,” said Guy Standing, co-founder of the Basic Income Earth Network, at the World Economic Forum in Davos, Switzerland. “It’s an insult to the human condition. Basic incomes tend to increase people’s work rather than reduce it.”

Some research supports his claim.

In a working paper, researchers Damon Jones and Ioana Marinescu examined the effects of the Alaska Permanent Fund Dividend, which provides citizens of Alaska with an annual cash dividend. They found that the unconditional cash transfers had no negative effects on employment, and actually increased part-time work.

“It is reasonable to expect an unconditional cash transfer, such as a universal income, to decrease employment,” Jones said. “A key concern with a universal basic income is that it could discourage people from working, but our research shows that the possible reductions in employment seem to be offset by increases in spending that in turn increase the demand for more workers.”

Tech titans like Elon Musk and Mark Zuckerberg have also expressed support for UBI, and Y Combinator, a high-profile seed accelerator in Silicon Valley, is experimenting with its own UBI program in the U.S., which is set to expire in 2022. Another large-scale UBI experiment is taking place in Kenya, where the GiveDirectly charity is providing thousands of people a guaranteed income and gathering data on the individual and societal effects.

But some are skeptical of the hypothetical benefits of UBI, citing the enormous price tag of such programs.

Robert Greenstein, President of the Center on Budget and Policy Priorities, wrote last year that a UBI program that provides citizens with an annual $10,000 check would cost the country $3 trillion per year, and that such a program would likely increase poverty.

In any case, there are other uncertainties about UBI besides the economy, as Sam Altman, president of Y Combinator, pointed out in a 2016 interview with Business Insider. “What’s unclear to me is will people be net-happier or are we just so dependent on our jobs for meaning and fulfillment?”

Related
Neuropsych
Daily caffeine intake temporarily alters your brain structure
Compared to people who took a placebo, the brains of those who took caffeine pills had a temporarily smaller gray matter volume.
Thinking
Why you should laugh at yourself, according to Seneca and Nietzsche
“It is more human to laugh at life than to lament it.”
Hard Science
The violence of the Tonga eruption is a wake-up call to watch other submarine volcanoes
Out of sight, but not out of mind.
The Present
How circular economics can make us happier and less stressed
Entrenched business wisdom says that community-led economic systems are pure fantasy. Douglas Rushkoff disagrees.
The Learning Curve
The art of asking the right questions
The right questions are those sparked from the joy of discovery.
Up Next
Mind & Brain
Low-level anxiety can actually boost learning, study finds
“The bow too tensely strung is easily broken.” — Publius Syrus.