Third on the Big Think 2019 countdown reveals this is what the world will be like if we do not act on climate change.

DAVID WALLACE-WELLS: Well, I think when we look outside our windows every day, we see a world that is basically stable, and even if we hear a lot about extreme weather, see horrible news of wildfires and droughts and heat waves that kill people all around the world, we still reorient our emotional expectations for what the world will be like in our own lives. And most of our lives have not been yet all that dramatically disturbed by climate change. But in the decades ahead, I think they will be. There's basically no life on Earth that will be untouched by the force of climate in the decades ahead, and in most cases, that means deformed, damaged, transformed.

I think most scientists would say that the best case scenario is 1.5 degrees Celsius of warming. But personally, I think it'll be practically impossible for us to stay below two degrees without what's called negative emissions technology, which is fanciful tech that has been tested and is successful at a lab scale, but needs to be deployed at global scale to make much of a difference. The UN says that to have any chance of staying below two degrees, we need massive use of this technology, which we don't even know enough to trust. So for me, I orient my best case scenario at two degrees. And unfortunately, that's a level of warming that most scientists describe as the threshold of a catastrophe. Many island nations of the world describe it as genocide. That's how vulnerable they are to especially sea level rise at two degrees. But the impacts wouldn't just affect the island nations of the world. Many of the biggest cities in South Asia and the Middle East would be lethally hot in summer at two degrees, which could happen as soon as 2050. These are cities like Calcutta 5, 10, 12 million people. You wouldn't be able to go outside or certainly work outside without incurring a lethal risk. And that could happen, again, just by 2050, which is one reason why the UN expects that we could have 200 million climate refugees by that same date, 2050. 200 million. They think it's possible that we get as many as one billion, which is as many people as live today in North and South America, combined. I don't think those numbers are realistic. I think they're too high. But even if we get 100 million or 150 million climate refugees, it's important to remember that the Syrian refugee crisis, which totally destabilized European politics, led in its way to Brexit, and has transformed our politics globally through the way it's affected Europe, was the result of just one million Syrian refugees coming to the continent. We're talking about a refugee crisis that is almost certain to be 100 times as large, and it comes at a time when most nations of the world are retreating from our commitments to one another, retreating from our organizations and alliances, retreating from the UN, retreating from the EU, and embracing xenophobia and nativism and nationalism. That's especially concerning when you think about what's ahead, because there are going to be many more people in much more desperate need in the decades ahead. And if we don't welcome them, we'll be committing real moral crimes that from the advantage of today seem unconscionable, but which may become more normal, as we move forward into this new transformed world.

When we talk about worst case scenarios, there are a couple of different factors at play. One is what humans do. This is the most important factor. Will we change course? Will we continue to burn coal? Will we continue to produce fossil fuel emissions? The UN says that the track we're on now, the trajectory we're on now is likely to take us to about 4.3 degrees Celsius of warming by the end of the century if we don't change course. 4.3 degrees would mean $600 trillion in global climate damages. That's double all the wealth that exists in the world today. It would mean parts of the world could be hit by six climate driven natural disasters at once. It would mean more than double the warfare that we see today. And the impacts would be in our economic activity. It would be in flooding and the refugee crisis.

There are so many impacts that we have not really been able to think clearly about, because all of us are so reluctant to consider these horrifying outcomes. But the fact that they are horrifying should not make us turn away. It should make us focus on them more intently. We all have all of these psychological reflexes that make us reluctant to consider horrible possibilities. And for that reason, it's more important for us to take seriously the science, because we need to fight against those impulses to do better planning, to take more aggressive action than we would if we allowed ourselves to slip back into complacency. But there are cases that are worse than 4.3 degrees. There are what are called feedback loops in the climate system that could conceivably accelerate warming beyond what human action does. So there is what's called the albedo effect, which is a little complicated to explain. But sunlight is reflected back into outer space by any surface that's white; that's why when you wear a white shirt, you're cooler than if you wear a black shirt in the summer. The less arctic ice there is, the less reflective white ice there is at the top of the planet. That means more sunlight is being absorbed, which means that more warming would take place. So as arctic ice melts, the planet's ability to reflect solar energy back into space would diminish, and warming would accelerate. There is frozen in the Arctic permafrost a lot of methane, or I should say a lot of carbon, which could be released into the atmosphere as methane if that permafrost melts. Methane is, depending on how you count, at least 30 and perhaps 80 times as powerful a greenhouse gas as carbon dioxide. And there is enough carbon in that permafrost to double the concentration of carbon in the atmosphere that we have today. If that were released, it could accelerate warming by a couple of degrees all on its own. There are many more feedback loops like this.

Just this past week there was a study about cloud formation. If we get to about 1,200 parts per million of carbon, which is much higher than we are today at about 410, but it's conceivable early next century, we would completely disrupt the planet system for cloud formation. And that impact alone, scientists say in this study, would add 8 degrees Celsius of warming to the system. So we'd probably be at already 4 and 1/2 or 5 degrees by then, and we could immediately be brought to 12 and a half or 13 degrees Celsius. And that really would make much of the planet literally uninhabitable, not just the equatorial band, not just the tropics, but there would be places in the mid latitudes that would just be too hot to live. And we have not really begun to think about those possibilities. This is the world that we're entering into now, at just 1.1 degrees, but the whole range of possibilities stretches before us, and even the quite optimistic outcomes are horrifying. Two degrees is genocide, the island nations of the world say. Four degrees is at least twice as bad, depending on how you count. And there are possibilities north of 4 degrees, which are even scarier, because it would mean that the climate system had escaped human control.

The Uninhabitable Earth: Life After Warming 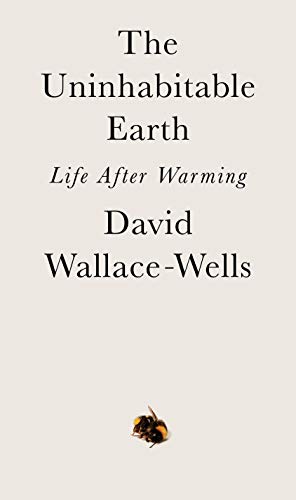