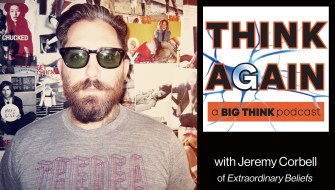 Between subjective experience and the things most people can accept as objective facts, there yawns a cavernous gulf. Imagine you’re on a stage in front of 50,000 strangers trying to explain what it felt like to fall in love for the first time. There are ways of going about it, but it sure ain’t easy. The facts most of us agree upon—things like gravity, our own mortality, global warming—they rest on reason, evidence, science. Clunky and fussy though they sometimes are, these are the best tools we have to test and replicate knowledge species-wide.

But what happens when someone claims that something’s objectively true, but reason, evidence, and/or science are insufficient to test it? Claims of hauntings, cryptozoological wonders, or alien technology under US military lock and key? This is the stuff of endless subreddits and secret societies. Of conspiracies and shadow-wars between skeptics and believers. Where evidence is lacking or disputed, things can get hella heated.

My guest today wants to “weaponize your curiosity” in the realms of these extraordinary beliefs. He’s Jeremy Kenyon Lockyer Corbell, a mixed-martial artist, a visual artist, and an investigative filmmaker. His new documentary is Bob Lazar: Area 51 and Flying Saucers. It raises some ghosts, some hell, and some unsettling questions.

Michelle Thaller on how religion affects our view of the cosmos

William Shatner is going to space because Jeff Bezos loves Star Trek.
Up Next
The Present

Why Facebook is developing a cryptocurrency for WhatsApp users

The social media company has long been expected to make a move into blockchain.