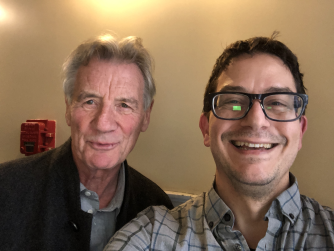 Michael Palin and Jason Gots who, after recording this episode, is as happy as a mad pumpkin that has swallowed the moon

Jason: I recently spent several hours on a transatlantic flight zooming in and out of the interactive map of the Earth on my seat’s personal entertainment unit. Exploring tiny islands in the polar North…impossible inland seas in the middle of Central Asian deserts…Places so remote and strange that they fire the imagination.

In 2018, It’s not easy to wrap your mind around the fact that not all that long ago no human and no satellite had ever set eye on many of these places. For all anybody knew, much of the Earth was probably populated by Cyclopses and sea monsters. In the mid-1800s, the icy poles, north and south, were the final frontiers. And the brave men—and, even a bit braver perhaps, women disguised as men—who set off to explore them were quite literally heading into the unknown.

My guest today is writer, actor, comedian, and explorer Michael Palin. He studied history at Oxford, then transformed comedy forever as a writer and performer in Monty Python’s Flying Circus. Since then he’s been traveling the world, writing books and hosting travel documentaries. His latest book, EREBUS, resurrects one of the greatest nautical mysteries of all time, and takes us deep into the icy heart of polar exploration in the mid-19th century.

Nadya Tolokonnikova (of Pussy Riot) on women’s rights in Russia

Ask Ethan: Would Traveling Back In Time Destroy The Universe?

Artistic impression of a Multiverse — where our Universe is only one of many. Will traveling back in time have the possibility of unraveling the spacetime continuum and destroying the Universe? (JAIME […]