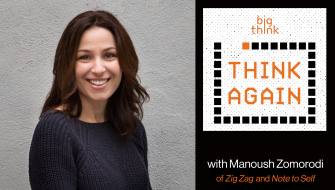 Why would two intelligent women running a hugely successful podcast at one of the most respected studios in the audio world, quit to start a small journalism company built on blockchain, a technology very few people have ever heard of?

As we keep learning the hard way, as long as we get our journalism from Facebook and 24 hour cable news, we’re suckers for infotainment, propaganda, and actual fake news—not the real news Trump is always calling fake, but the real fake news trolls cook up to polarize American culture. And in these raging digital waters, non-profits and public media struggle just to stay afloat.

There’s got to be a better way, right?

That’s what Jen and Manoush were betting on, anyway. They document the twists and turns since that fateful decision with refreshing vulnerability on their podcast ZigZag. Its second season started on October 11th.

Derek Thompson on what makes a pop song addictive

Ask Ethan: Why Is The Black Hole Information Loss Paradox A Problem?

It was Stephen Hawking’s obsession for the last 30 years of his life. Here’s why it matters.When it comes to the sciences, sometimes making two observations or measurements that appear to […]