Philosopher Alan Watts on the difference between money and wealth

What would you do if money was no object?

In a thought-provoking lecture Alan Watts once posed this great question: "What would you do if money was no object?"

This pointed and hyperbolic question asks us to dig into the deeper truth of what it is we really want and desire in life and also question the symbolic importance we place on the almighty abstraction of the dollar.

Watts urged his listeners to detach themselves from the notion of chasing money to satisfy our desires. Easier said than done of course — but in typical koan fashion, Watts manages to show us that when we instead seek something less material and more spiritually fulfilling, the money part won't become an issue in the end.

What would you do if money was no object?

The gist of Watt's speech is as follows:

"So I always ask the question, 'what would you like to do if money were no object? How would you really enjoy spending your life?' Well, it's so amazing as a result of our kind of educational system, crowds of students say well, we'd like to be painters, we'd like to be poets, we'd like to be writers, but as everybody knows you can't earn any money that way…

Let's go through with it. What do you want to do? When we finally got down to something, which the individual says he really wants to do, I will say to him, you do that and forget the money, because, if you say that getting the money is the most important thing, you will spend your life completely wasting your time… To structure your existence with an objective of monetary gain is to spend a lifetime chasing an abstraction.

... And after all, if you do really like what you're doing, it doesn't matter what it is, you can eventually turn it — you could eventually become a master of it. It's the only way to become a master of something, to be really with it. And then you'll be able to get a good fee for whatever it is. So don't worry too much..."

Now money is a fundamental fact of our current constructed reality, even Alan Watts understood that. Barter, exchange, value, currency and what have you – there is absolutely no feasible way around it. So leave your pipe dreams and utopian visions at the door, just entertain the question at face value for now. It's probing for something much deeper than some cheap ideological economic fix.

Alan Watts on being paid for his work

Pontificating on this issue in any regard is risky business as inherent contradictory and seemingly hypocritical charges are bound to be directed at its speaker.

Watts rightfully so, silenced any criticism for any monetary gain he received for his work. After all, he knew that he was playing the society game and needed to make a living for himself. Watts was a philosopher and quite good at what he did.

This line of questioning would lead to Watts making an important distinction on the nature of differentiating between money and wealth. On a personal level, he understood what wealth was to him and the limits of a human's capacity to experience luxury and excess:

"There are limits to the real wealth that any individual can consume... We cannot drive four cars at once, live simultaneously in six homes, take three tours at the same time, or devour 12 roasts of beef at one meal."

Does It Matter? Essays on Man's Relation to Materiality 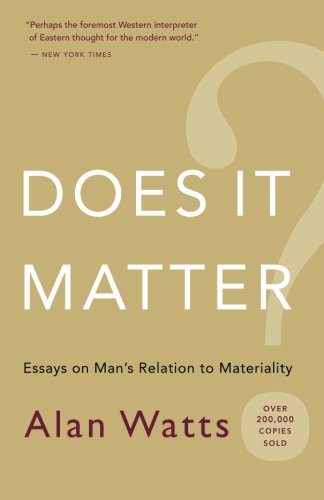 Watts explored the issue deeper in his anthology Does It Matter? Essays on Man's Relation to Materiality. In the essay "Wealth Versus Money," Watts remarked on the inability for humankind to distinguish between the merely symbolic and the true.

He looks into our simple confusion between money and wealth:

"Money is a way of measuring wealth but is not wealth in itself. A chest of gold coins or a fat wallet of bills is of no use whatsoever to a wrecked sailor alone on a raft. He needs real wealth, in the form of a fishing rod, a compass, an outboard motor with gas, and a female companion.

But this ingrained and archaic confusion of money with wealth is now the main reason we are not going ahead full tilt with the development of our technological genius for the production of more than adequate food, clothing, housing, and utilities for every person on earth."

This type of symbolic thinking manifests itself in all outlets of the physical world. In his essay, Watts makes a point about the how the fundamental confusion between money and wealth leads us to preposterous positions. He used the Great Depression as an example.

"Remember the Great Depression of the '30s? One day there was a flourishing consumer economy, with everyone on the up-and-up; and the next, unemployment, poverty, and bread lines,

What happened? The physical resources of the country the brain, brawn, and raw materials were in no way depleted, but there was a sudden absence of money, a so-called financial slump…

Complex reasons for this kind of disaster can be elaborated at length by experts on banking and high finance who cannot see the forest for the trees..."

Watts makes no claim of being an economic or financial expert. Those to him are mere surface roles muddying the waters at the core of this issue he's trying to broach. Watts likens the absurdity to a man coming to work on the building of a house, the morning of the Depression and the boss saying to him:

Sorry, baby, but we can't build today. No inches.


Watts realized that there was going to be and will always be harsh resistance to this type of idea or rather awareness of the symbolic:

"What wasn't understood then, and still isn't really understood today, is that the reality of money is of the same type as the reality of centimeters, grams, hours, or lines of longitude. Money is a way of measuring wealth but is not wealth in itself.

It is not going to be at all easy to explain this to the world at large, because mankind has existed for perhaps one million years with relative material scarcity, and it is now roughly a mere one hundred years since the beginning of the industrial revolution."

Now wait just a minute before flinging out those Communist manifestos and leading a riot down Billionaire's row. Regulation and taxation on this abstraction is not the answer.

"To try to correct this irresponsibility by passing laws would be wide of the point, for most of the law has as little relation to life as money to wealth. On the contrary, problems of this kind are aggravated rather than solved by the paperwork of politics and law.

What is necessary is at once simpler and more difficult: only that financiers, bankers, and stockholders must turn themselves into real people and ask themselves exactly what they want out of life — in the realization that this strictly practical and hard–nosed question might lead to far more delightful styles of living than those they now pursue. Quite simply and literally, they must come to their senses — for their own personal profit and pleasure."

So then we're brought back to the original question: what do I desire?