Every day a new scientific study makes its way across our screens, and some are worth taking seriously while some, well… Like this study. The New York Post trumpets its findings as, “Going to a concert is better for you than yoga: study.” Newsweek says, “GOING TO CONCERTS CAN HELP YOU LIVE LONGER, ACCORDING TO NEW STUDY.” You get the idea. But wait a second. For truth in advertising, we’d have to go with RIOT FEST — they do love their upper-case letters — who say, “A LIVE MUSIC VENUE PAID FOR A STUDY THAT FOUND GOING TO LIVE MUSIC VENUES IS GOOD FOR YOUR HEALTH.” Well, yes.

All of these articles and others link back to a press release from the massive O2 concert arena in London. O2 paid Patrick Fagan, “expert in behavioral science and Associate Lecturer at Goldsmith’s University” to study the long-term effects of regular concert attendance, and — guess what — he found that regularly spending your money on concert tickets at places like O2 can increase your lifespan! Not just that: Going to a show on a fortnightly basis — every two weeks for non-Brits — can actually add nine years to your life!

If we sound skeptical, it’s because, in addition to the research having been funded by an organization that stands to make tons of money from its conclusions, the study itself does not seem to be available for examination anywhere. This is pretty unusual and does nothing to support the credibility of its conclusions. All coverage simply links back to the press release. Hm. That having been said, here’s what O2 says Fagan’s research says.

Fagan’s summary: ”Our research showcases the profound impact gigs have on feelings of health, happiness, and wellbeing — with fortnightly or regular attendance being the key. Combining all of our findings with O2’s research, we arrive at a prescription of a gig a fortnight which could pave the way for almost a decade more years of life.”

The study links concertgoing to a sense of well-being, which has itself been linked to additional longevity. Fagan reports that just 20 minutes at a live concert can result in an increase in well-being of 21%.

Comparisons of “psychometric and heart-rate tests” — again, without access to the study, it’s hard to know exactly what this means — performed during concert attendance, yoga, and dog walking revealed benefits across the “happiness spectrum” for attending gigs: Self-worth went up by 25%, closeness to others by 25% and mental stimulation a whopping 75%. The press release is silent on what the stats for yoga and dog-walking were.

According to O2 and Fagan, it’s not the music, it’s the event. The same salutary effects don’t occur when you listen to music outside, say, O2. The press release says “two thirds (67%) of Brits surveyed saying experiencing live music makes them feel happier than simply listening to music at home — showcasing that the shared experience, which performed so strongly in the research, is key to increasing wellbeing.” Again, was this survey part of Fagan’s work or something else? We don’t know.

The nine-year claim comes from the finding that people who attended concerts “once a fortnight and more were the most likely to score their happiness, contentment, productivity and self-esteem at the highest level (10/10), suggesting that regularly experiencing live music is the key to building a long-standing improvement to wellbeing.” 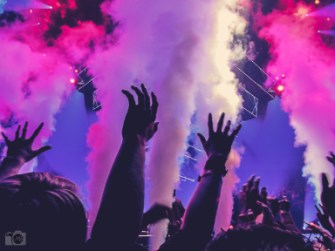 Not mentioned in the press release are the many people who don’t enjoy crowds or other aspects of live concerts. Should people who love them simply force them out to a Nickelback show to enhance their odds of a longer life? Every two weeks? Our study would feel a lot more confident about the O2/Fagan study if we could just read it.

Related
Neuropsych
Psychology studies that go viral are likelier to be bogus
A new 20-year analysis of over 14,000 psychology studies finds that a study’s media coverage is negatively linked to its replicability.
The Future
How a device transmits radio waves with almost no power
Apart from the energy needed to flip the switch, no other energy is needed to transmit the information.
The Present
Radical idea: Redraw the U.S. map as a nation of city-states
While cities drive national economic growth, their political geography means they cannot effectively deal with inequality, poverty, and other socioeconomic problems.
The Learning Curve
Why do high IQ people stagnate in their careers? Emotional intelligence
Research suggests that emotional intelligence is more vital for success than IQ.
The Present
Even in the age of AI, some problems are just too difficult for computers
Computers are growing more powerful and more capable, but everything has limits
Up Next
Culture & Religion
Did the Knights Templar invent modern banking?
What’s the truth about one of history’s most mythologized order of knights?