It’s been a dream for so many of us for so long: a pill you can take to help you lose weight. As with any matter such as this, the particulars are important. This story begins as many a weight loss story does — with fat. We have two types in our bodies, white or yellow fat and brown fat. White fat is calorie storage. Since our ancestors didn’t always have a steady food supply, this was the body’s way of putting calories aside to carry us through the lean times.

Brown fat on the other hand, produces body heat. Humans only have a very small amount of this kind. It can be found in babies and other mammals in larger quantities. Brown adipose tissue (BAT) or brown fat is known to keep hibernating mammals warm throughout winter.

For some time, medical science thought that only newborns had brown fat. In 2009 it was discovered in adults as well. If activated, BAT burns white fat for heat, helping you lose weight. Some people try to trick their body into engaging brown fat, in order to burn more calories during their workout. One study found that when participants stuck a foot into ice water during exercise, brown fat activation increased 15 times what it would have normally been. But who wants to torture themselves like that?

With the growing obesity epidemic worldwide, researchers around the world are looking for novel ways to combat the condition, which left unmitigated can lead to heart disease, type 2 diabetes, osteoporosis, certain kinds of cancer, and more. Scientists in China have some expert’s hopeful. They identified a compound in mulberries which naturally activates brown fat. Scientists at the Chinese Academy of Sciences in Beijing, conducted the study. Rutin is the compound they isolated. It may someday become a drug therapy to address obesity and type 2 diabetes, according to Wan-Zhu Jin, Ph.D., lead researcher on this study. 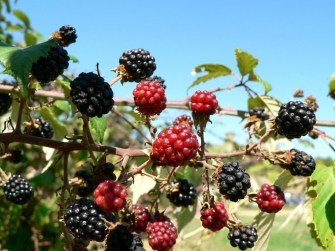 Mulberries contain rutin, a compound that can help burn fat. They have plenty of other health benefits, too.

An experiment was conducted on mouse models. Jin and colleagues collected two cohorts, both obese. One group was comprised of the genetically obese, while the other was purposely fed an obesity-inducing diet beforehand. Over the course of the study, each cohort received a regular diet along with one milligram per milliliter of rutin, added to their drinking water. Rutin acted as a “cold mimetic” researchers found, activating brown fat and helping the metabolism burn more calories through exercise. The mice also had better glucose homeostasis or balance between insulin and blood-sugar.

According to these scientists, rutin activates the same biochemical cascade as cold weather does, which increases the expression of the gene UCP1, along with mitochondria in brown fat. Besides fat-burning properties, mulberries are thought to carry a whole host of health benefits including lowering “bad” cholesterol, improving blood-sugar levels, and even lowering the risk of certain cancers.

Someday rutin may be held within a class of drugs known as BAT-activators. Exercise and diet will still be an important part of controlling obesity. But a rutin supplement could boost the burning of calories and white fat. That doesn’t necessarily mean human systems will react the same way, of course. But these results are encouraging. Still, years of research must be done before it makes it to a pharmacy near you.

EV charging stations are the most widespread alternative to gas and diesel pumps. Each alternative has its own hotspots and “deserts.”
Up Next
Politics & Current Affairs

Who Really Supported Trump? A Great Minority of the Electorate

If Americans love their democracy why does voter turnout put them 31st out of 35 OECD nations?