As bioethicist L. Syd M Johnson of SUNY-Upstate Medical University tells Big Think, “Death is not an event — it’s a process.” It’s not as if there’s a big on/off switch that gets flipped. It takes a while for a body’s systems to wind down and eventually cease functioning.

Now a new study from researchers at University of Illinois Chicago (UIC) reports that gene expression within certain brain cells actually kicks into high gear when we die. “Most studies assume that everything in the brain stops when the heart stops beating, but this is not so,” says the study’s corresponding author Jeffrey Loeb, the John S. Garvin Professor and head of neurology and rehabilitation at the UIC’s College of Medicine.

The study was recently published in Scientific Reports. 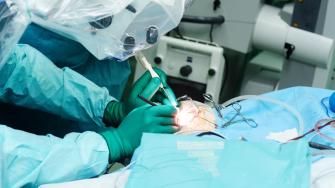 Loeb and his colleagues discovered the puzzling phenomenon when examining brain tissue they’d collected in surgery. The gene expressions they were seeing didn’t match up with any published reports of such cells from people with or without neurological disorders.

“We decided to run a simulated death experiment by looking at the expression of all human genes, at time points from 0 to 24 hours, from a large block of recently collected brain tissues, which were allowed to sit at room temperature to replicate the postmortem interval,” Loeb tells UIC Today.

Loeb’s team is uniquely qualified to conduct such an experiment since Loeb is director of brain-tissue bank, the UI NeuroRepository. The bank collects brain tissue, with permission, from people with neurological disorders for research purposes. In addition, epileptic brain tissue, for example, is collected for pathological diagnoses in the hopes of reducing or eliminating seizures. Brain tissue not required for resolving donors’ medical issues remains available for research.

The team found that brain tissue behaved in one of three different ways “post-mortem.”

Most of the genes in the brain tissue, 80 percent of them, did nothing, remaining essentially stable throughout the 24-hour test period. These genes were predominantly “housekeeping” genes that handled basic cellular functions.

The second group were genes known to be involved in activities such as memory and thinking. They’re also implicated in seizure events and are important in schizophrenia and Alzheimer’s disease research. These genes degraded rapidly once the test period began.

The third group, the “zombie” genes, were found in glial cells involved in inflammation during life. The activity of these genes was inversely proportional to the rapidly fading second group. During the test period, the zombie cells grew and sprouted long arm-like appendages for hours.

Says Loeb, “That glial cells enlarge after death isn’t too surprising given that they are inflammatory and their job is to clean things up after brain injuries like oxygen deprivation or stroke.”

There’s a great deal of research that involves post-mortem brain tissue, and the revelation that their states are not necessarily static at death changes things a bit.

“Our findings don’t mean that we should throw away human tissue research programs,” says Loeb. “It just means that researchers need to take into account these genetic and cellular changes, and reduce the post-mortem interval as much as possible to reduce the magnitude of these changes.”

He adds, “The good news from our findings is that we now know which genes and cell types are stable, which degrade, and which increase over time so that results from postmortem brain studies can be better understood.”

The discovery of the zombie genes is sort of bizarre, but it can lead to better research going forward. As Loeb says, “Our findings will be needed to interpret research on human brain tissues. We just haven’t quantified these changes until now.”

Tags
braindeathdiscoverygeneticshuman bodylifemedical researchneurosciencezombie
In this article
braindeathdiscoverygeneticshuman bodylifemedical researchneurosciencezombie
Related
Neuropsych
Asthma drug brings back “lost” memories
In a study involving mice, scientists used two different techniques — one optogenetic and one pharmacologic — to recover “lost” memories.
Life
Our antidepressant drugs are affecting animals and ecosystems
A toxicologist explains the impacts of antidepressants on fish — and no, they’re not getting any happier.
Thinking
Visual thinking: How to understand the inner lives of animals
Humans are good visual thinkers, too, but we tend to privilege verbal thinking.
Health
New blood types are often discovered following medical disasters
New blood types are regularly discovered by an unusual absence or an unusual presence — both of which can result in tragedy.
The neuroscience of loving music
Humans are musical animals four million years in the making, explained by music expert Michael Spitzer.
▸
8 min
—
with
Michael Spitzer
Up Next
Starts With A Bang
Ask Ethan: What Is A Scalar Field?
Scalars, vectors, and tensors come up all the time in science. But what are they?One of the major goals of science is to describe our reality as accurately as possible. If […]