In 2016, Dr. Tadas Stumbrys discovered that lucid dreaming helps improve physical performance. Dividing volunteers into four groups, lucid dreamers outperformed the physical practice and mental rehearsal groups by statistically significant margins. As he said at the time, “A recent brain imaging study showed that brain activity in the sensorimotor cortex that is responsible for controlling our physical movements is similar during imagined and lucidly dreamed movement, thereby allowing motor learning to occur.”

We’ve long known that imagining movements are their own sort of “practice,” but an interesting new study, published in Nature Communications, confirms that we use the same eye movement patterns when we lucid dream as when we observe physically actions, but not when we imagine movement.

Three researchers — Stanford University’s Philip Zimbardo and Stephen LaBerge; the University of Wisconsin-Madison’s Benjamin Baird — tackled the longtime question of whether dreaming mimics perception or imagination, finally proving the former. They accomplished this by tracking the “smooth pursuit” eye movements of seven volunteers, each of whom spent between one and eight nights in their laboratory. 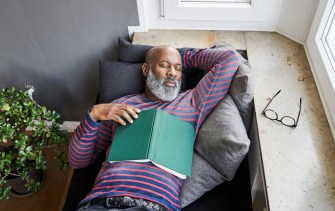 To understand smooth pursuit you can try this experiment: Track your index finger, held out at arm’s length, from left to right several times. Your eyes follow the pattern in a reliably smooth pattern. On the contrary, when you try to imagine the same exact movement, your eyes will not flow smoothly left to right, but jump ahead to particular points. This is due to your saccadic system, a name derived from the French word for “jolt.” In both lucid dreaming and awakened perception, your smooth pursuit system is engaged.

The researchers write that vividness relies on intensity of neural activation. Imagining images compete with our normal sensory process, but when asleep our sensory input system — absorbing the world around us — is suppressed. External objects that could bombard our perception processes are eliminated. They continue,

Our findings suggest that, in this respect, the visual imagery that occurs during REM sleep is more similar to perception than imagination. . . . Under conditions of low levels of competing sensory input and high levels of activation in extrastriate visual cortices (conditions associated with REM sleep), the intensity of neural activation underlying the imagery of visual motion (and therefore its vividness) is able to reach levels typically only associated with waking perception.

Beyond solving a longtime debate tracing back to Aristotle, the researchers believe this research is another piece in helping solve the consciousness puzzle. Seasoned lucid dreamers — it’s a skill you can actually practice — have the ability to control their actions while unconscious. This link between consciousness and neurophysiological processes adds another intriguing layer to the link between our waking and sleeping lives. The more we study that link, the more we find out that the two states are not as separate as imagined.

Psychologists are finding that moral code violations can leave an enduring mark — and may require new types of therapy.
Up Next
Health

The #1 source of plastic trash in our oceans? Cigarette butts.

Ocean Conservancy has collected more than 60 million butts since the ’80s.