Many people struggle with the question of what the meaning of life their life is. The dread that can accompany meaninglessness is well known, but where to turn when you can’t find purpose often remains obscure.

Then, there is Viktor Frankl, and his school of psychology based around finding the meaning of your life.

Viktor Frankl was an Austrian psychologist known for his system of psychotherapy known as Logotherapy. As he explained in his book Man’s Search for Meaning, many of the key ideas were born out of his time in Nazi concentration camps. He observed how his fellow prisoners dealt with the Nazi atrocities; these observations formed the basis for his theories.

Frankl suggested that a “will to meaning,” exists in all of us and impacts our behavior and mental health. Our having it means that what we really want in life is to give a meaning to what we are doing and experiencing. If we fail to do so, we are likely to begin to show symptoms of depression, anxiety, and neurosis. By finding meaning, we can fully function as people and deal with whatever life throws at us.

Logotherapy was designed to help people deal with the problem of finding meaning, and had a robust theoretical framework to help guide it. Frankl assumed that life had inherent value and was worth living, that we have a will to meaning which must be confronted, that we have the freedom to find meaning at every moment, and that people had not only a mind and body but a “spirit” that was our true, unique, essence that also had to be considered.

In sessions, Frankl would engage in dialogue with his patients to help guide them along a path of self-discovery. He also helped people directly face their fears as a way to overcome them and encouraged people to see problems in larger contexts by steering them away from self-absorbed brooding.

The fundamental ideas of the school are evident in a famous excerpt from his book which concerns a distraught widower:

“Once, an elderly general practitioner consulted me because of his severe depression. He could not overcome the loss of his wife who had died two years before and whom he had loved above all else. Now, how can I help him? What should I tell him? Well, I refrained from telling him anything but instead confronted him with the question, ‘What would have happened, doctor, if you had died first, and your wife would have had to survive you?’ ‘Oh,’ he said, ‘for her this would have been terrible; how she would have suffered!’ Whereupon I replied, ‘You see, doctor, such a suffering has been spared her, and it was you who have spared her this suffering — to be sure, at the price that now you have to survive and mourn her.’ He said no word but shook my hand and calmly left my office. In some way, suffering ceases to be suffering at the moment it finds a meaning, such as the meaning of a sacrifice.”

This is nice and all, but is there any empirical data for these theories or is it all just hot air?

The various benefits of having meaning in your life are well known. People who feel their lives have meaning tend to be healthier, happier, age better, and generally have a better time than people who don’t.

As for Logotherapy, an overarching study of existing research showed it is an effective method for dealing with common issues such as depression and anxiety. It has also shown promise in marriage counseling, hospice care, coping with job burnout, empty nest syndrome, and is linked to increased life expectancy in cancer patients.

Though it was never meant to deal with severe psychosis, it has been used to help people with these conditions as well with some degree of success. 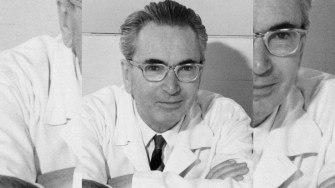 How can somebody do in their day to day life to find meaning? I’m asking for a friend.

Frankl gave us three suggestions in his book:

“We can discover this meaning in life in three different ways: (1) by creating a work or doing a deed [the way of achievement or accomplishment]; (2) by experiencing something or encountering someone [the way of nature and culture, and the way of love]; and (3) by the attitude we take toward unavoidable suffering.”

He also reminds us that life isn’t fair, and sometimes it’s going to suck. In these cases, attitude can be everything:

“When we are no longer able to change a situation — just think of an incurable disease such as inoperable cancer — we are challenged to change ourselves.“

He isn’t encouraging suffering for its own sake though; he later clarified that option three applies only when the first options are unavailable.

What are some criticisms of this school?

There are a few issues with Logotherapy that were pointed out by other existential psychologists.

The most notable was Frankl’s authoritarian tendencies when conducting therapy sessions. Psychologist Rollo May explained in his book Existential Psychology, Frankl’s therapy came dangerously close to authoritarianism because:

“… there seem to be clear solutions to all problems, which belies the complexity of actual life. It seems that if the patient cannot find his goal, Frankl supplies him with one. This would seem to take over the patients’ responsibility and. . . diminish the patient as a person.”

In another case, May compared Frankl’s treatment of a patient with schizophrenia as having the “same authoritarian character as fundamentalistic religion.” If these issues were problems with Logotherapy itself or with Frankl’s application of his theories, as he was said to have been arrogant when talking with patients, is an unsolved question.

One thing is clear though, if you didn’t have meaning in your life Dr. Frankl was going to give it to you. Even the famous story above about the widower takes on a new tone in light of this critique. It’s ironic when you think about it — remember where Frankl said he was when he came up with some of these ideas.

Why be happy when you could be interesting?

Is this system still in use?

It lives on in spirit if not in name. Meaning Therapy, a recently developed school that helps people work toward self-transcendence as a solution to various issues, was directly influenced by Frankl’s thought. Elements of Logotherapy have also found their way into cognitive behavioral therapy (CBT) and acceptance and commitment therapy (ACT). The overlap with ACT is very plain to see, as several sources agree that working toward a meaningful life is a critical element of it. The use of Logotherapy as a compliment to CBT has been directly studied with positive results.

Is the need for meaning so great that without it we start to crack? Is meaning, once found, so sustaining that it can support people even through the darkest part of the 20th century? One psychologist thought so and tried to help others as best he could with that insight. While finding a dedicated Logotherapist might be difficult, the ideas of Viktor Frankl can still be of great use in therapy and to people everywhere who are trying to make sense of it all.

Tags
creativitydepressionmedical researchmental healthmindpsychology
In this article
creativitydepressionmedical researchmental healthmindpsychology
Related
Neuropsych
Why is a Starbucks loyalty rewards program making customers so angry?
The rewards price to get a free cup of hot coffee at Starbucks is going up.
Thinking
What if you could rewire your brain to conquer suffering? Buddhism says you can
For Buddhists, the “Four Noble Truths” offer a path to lasting happiness.
3 game theory tactics, explained
How to maximize wins and minimize losses, explained by four experts on game theory.
▸
7 min
—
with
Kevin Zollman
Sponsored
What childhood “money story” is shaping your financial behaviors?
Here are the signs that you inherited “money anxiety” from your parents.
How to fix your money trauma
Do you remember feeling “money shame” for the first time?
▸
7 min
—
with
Dr. Brad Klontz
Up Next
Hard Science
CRISPR-edited babies born in China may have enhanced brain functions
The brains of two genetically edited babies born last year in China might have enhanced memory and cognition, but that doesn’t mean the scientific community is pleased.