I recently returned to Beloit College, where I taught for nearly 20 years before moving on to Washington College and the Institute for Humane Studies. Slated to speak on the topic of campus speech at an institution still wrestling with its own speech-related controversy, I was somewhat nervous.

I needn’t have been.

Perhaps it was the bookish title of my talk — “Conversational Ethics: What Would Adam Smith Have Us Do?” Perhaps I still had some street cred on campus. Or perhaps folks were simply worn out. But no one came loaded for bear. 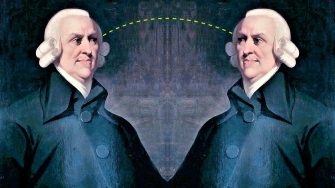 Smith has a lot to teach us about the ethics of conversation, particularly when public discourse becomes acrimonious. In The Theory of Moral Sentiments, he observed that the “violence and injustice of faction” tests us in ways that the ordinary “bustle of business in the world” does not. He writes, “The violence and loudness with which blame is sometimes poured out upon us seems to stupify and benumb our natural sense of praise-worthiness and blame-worthiness.” In other words, the clamor of the crowd can make it hard to tell right from wrong.

Smith counsels that to prepare ourselves for the prospect of unjust condemnation, we must gain practice at viewing our beliefs and conduct not from the vantage point of the crowd but from the perspective of a well-informed impartial judge. If this imagined “impartial spectator” approves of our stance, then we are justified in ignoring the clamor. With practice, we become wiser and more accustomed to summoning the “self-command” we need to stand tall in the face of injustice.

But a sophomore in the audience recognized that this advice only helps the speaker. It doesn’t stop us from being part of the unjust crowd. He asked, “What can we do, in practical terms, to keep the conversation positive?”

It was one of those moments when a dozen possible answers come to mind, but the voice in your head says, “Pick one!” The words that came out of my mouth were, “We could all do a better job of assuming good faith.” Then the voice said, “Why did you pick that one?”

As soon as I said it, I realized that the 19-year-old asking the question might not know what I meant by such an old-fashioned phrase. I realized too late that though I use the phrase frequently, I had not thought through a full explanation of its meaning. As I started to unpack it in the moment, I realized what a potent concept it is and how far we have drifted from it.

“A presumption of good faith demands a lot from us. It requires that we suspend judgment long enough to ask questions in a spirit of openness and curiosity.”

Assuming good faith means that we expect that our conversation partner is interested in learning from us and is seeking to understand our point of view. It means that we should assume, unless we have good evidence to the contrary, that their intent is not to deceive or to offend. We can certainly point out when an error has been made or why offense has been taken, but it should be with the intent of making the conversation better, not closing it down.

A presumption of good faith demands a lot from us. It requires that we suspend judgment long enough to ask questions in a spirit of openness and curiosity. If the student in the audience and I disagree, I should focus first on figuring out why it is that he and I draw different conclusions even though we are looking at the same world. Perhaps there’s something in his history, or mine, that led us to different places.

Good faith means that I should take my time to thoughtfully consider his perspective before I decide to praise it or condemn it. But time for thoughtful consideration seems to have fallen out of fashion. As we saw in the Covington Catholic story — in which a viral video clip inspired many to signal their disgust for a group of teenage boys accused of racism and disrespect, only to learn later that the story was far more complicated — we feel pressure to be the first to signal our moral commitments to the world. We fear that if we take our time we will be seen as being complicit with wrongdoing. So, we take shortcuts. We bypass the hard work of moral reasoning, and instead praise or condemn based on factional affiliation.

But through the cracks of the political divide we are also seeing positive examples emerge. University of Michigan students Kate Westa and Brett Zaslavsky, for example, lead WeListen, a bipartisan club dedicated to civil cross-ideological debate. At the national level, StoryCorps’ One Small Step is facilitating one-on-one conversations in which people who disagree listen and respond to one another with respect. This is good faith in practice.

Arguably, there are exceptions to when we are expected to assume good faith. If we extend this and other conversational courtesies to incendiary speakers who gain prominence by violating those same courtesies, it is out of grace, not entitlement. We are obliged to respect their First Amendment rights but nothing more.

Incendiary speakers, however, are the exception. And we shouldn’t base our ethical standards on the exception. Our default should be the presumption of good faith.

Tags
activismcommunicationdebateemotionsfriendshipphilosophypoliticsprotestsrelationshipsspeechtrust
In this article
activismcommunicationdebateemotionsfriendshipphilosophypoliticsprotestsrelationshipsspeechtrust
Related
Thinking
Finding your essential self: the ancient philosophy of Zhuangzi explained
Adopting a healthy scepticism towards inherited ideas means “emptying the container of the Self.”
Thinking
Why you should laugh at yourself, according to Seneca and Nietzsche
“It is more human to laugh at life than to lament it.”
13.8
Why the origin of life and the Universe itself might be forever unknowable
There might be a hard limit to our knowledge of the Universe.
Thinking
Bonhoeffer’s “theory of stupidity”: We have more to fear from stupid people than evil ones
Evil is easy to identify and fight against; not so with stupidity.
Thinking
Can’t move on? Here’s what the Buddhist idea of anattā teaches about letting go
Give yourself (and others) a break.
Up Next
The Present
Why factory farms are a “perfect storm” for disease pandemics
We’ve known this virus was coming. We just didn’t do anything about it.