Nothing helps as much in a job search as a letter of recommendation (except, perhaps, being related to the hiring body). Such letters are critical for getting into institutions of higher learning and landing new gigs. While politics exist in every industry, recommendations offer a person the opportunity to champion an intern or younger colleague. That is certainly the case with Robert Oppenheimer’s letter written for Richard Feynman.

A legendary theoretical physicist, Oppenheimer is best known for his work as the head of the Los Alamos Laboratory during World War II. Considered the “father of the atomic bomb,” he is equally famous for quoting the Bhagavad Gita after seeing the bomb’s initial test run: “Now I am become Death, the destroyer of worlds.”

In 1943, Oppenheimer sent a letter to Raymond Birge, head of the Department of Physics at UC Berkeley. As the letter below indicates, Oppenheimer was championing Feynman for a position in Birge’s department. Feynman had already unsuccessfully applied to that very department. We all know how far blind applications tend to go.

What you’ll notice is not how much Oppenheimer expresses his admiration for Feynman’s intellect as much as his personality traits, the nature of his character. Today, we recognize Feynman’s greatness thanks to his earnest and approachable teaching of physics as much as his humility, the man who once remarked that “it’s much more interesting to live not knowing than to have answers which might be wrong.”

At the time of this letter, however, Feynman was a 25-year-old learning how to stand on the shoulder of giants. Oppenheimer was happy to boost him up. Thank goodness he did: no one influenced 20th century physics like Feynman, a man who was able to step in front of large crowds to explain complex ideas in physics with ease, grace, and humor.

After explaining that Feynman is “the most brilliant young physicist here,” Oppenheimer pivots to his emotional intelligence: his “engaging personality and character,” a person who has a “warm feeling for physics in all its aspects.” This is important, as many pit science as the cold, unfeeling counterpart to the warm fuzzies that religion offers. This assumption simply isn’t true. Science is as much art as analytics, especially when dealing with theoretical physics. Thinkers who can embody this reality prove to be important educators in the gap between ideas and the public.

Oppenheimer notes Feynman’s ability to work with colleagues and the “big shots” on whose shoulders the young physicist was standing on. An unfortunate reality of science (and academia at large) is the territorial nature of its elite. To be able to work with top thinkers in any discipline and not only not threaten but be embraced by superiors is a skill few accomplish. At this young age, Feynman dialed it in.

Most amusing is Oppenheimer’s comparison of Feynman to Paul Dirac, an English theoretical physicist who was so brilliant and odd that Albert Einstein said of him, “I have trouble with Dirac. This balancing on the dizzying path between genius and madness is awful.” Perhaps Oppenheimer was responding to Dirac’s criticism of his love for both science and poetry, which Dirac claimed were incompatible. Oppenheimer states that Feynman is as brilliant a thinker, “only this time human.”

This letter is an important reminder that brilliance will get you far, but not far enough. Some will be remembered for their intellect alone. To be recalled for both your brain and humanity is much rarer. By all accounts, Richard Feynman embodied this fully. 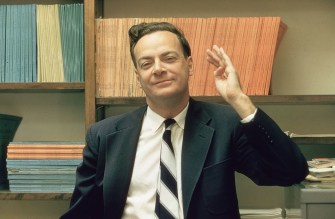 In these war times it is not always easy to think constructively about the peace that is to follow, even in such relatively small things as the welfare of our department. I would like to make one suggestion to you which concerns that, and about which I have myself a very sure and strong conviction.

As you know, we have quite a number of physicists here, and I have run into a few who are young and whose qualities I had not known before. Of these there is one who is in every way so outstanding and so clearly recognized as such, that I think it appropriate to call his name to your attention, with the urgent request that you consider him for a position in the department at the earliest time that that is possible.

You may remember the name because he once applied for a fellowship in Berkeley: it is Richard Feynman. He is by all odds the most brilliant young physicist here, and everyone knows this. He is a man of thoroughly engaging character and personality, extremely clear, extremely normal in all respects, and an excellent teacher with a warm feeling for physics in all its aspects. He has the best possible relations both with the theoretical people of whom he is one, and with the experimental people with whom he works in very close harmony.

The reason for telling you about him now is that his excellence is so well known, both at Princeton where he worked before he came here, and to a not inconsiderable number of “big shots” on this project, that he has already been offered a position for the post war period, and will most certainly be offered others. I feel that he would be a great strength for our department, tending to tie together its teaching, its research and its experimental and theoretical aspects.

I may give you two quotations from men with whom he has worked. Bethe has said that he would rather lose any two other men than Feynman from this present job, and Wigner said, “He is a second Dirac, only this time human.”

Of course, there are several people here whose recommendation you might want; in the first instance Professors Brode and McMillan. I hope you will not mind my calling this matter to your attention, but I feel that if we can follow the suggestion I have made, all of us will be very happy and proud about it in the future. I cannot too strongly emphasize Feynman’s remarkable personal qualities which have been generally recognized by officers, scientists and laity in this community.

With every good wish,

There’s no escaping the death of loved ones. But that doesn’t mean we’re powerless in the wake of loss.
Thinking

Every Christmas could be the last Christmas.
Leadership

“The digital HQ – the digital infrastructure that supports productivity and collaboration – actually became more important than the physical HQ.”
The Learning Curve

Women have made incredible gains into STEM fields, but they continue to face gender biases in the workplace.
Neuropsych

While most participants fibbed a little bit, laptop users were much more likely to lie – and by a lot more.
Up Next
Health

How NASA is keeping coronavirus off the International Space Station

A mission is planned for just three weeks from now, but NASA has a plan.