Controversial subjects brim with intense emotions. Abortion, the death penalty, climate change, gender identity, assisted suicide, bring up any one of these subjects and you’re guaranteed a lively conversation to follow. But if you really want to make a friend or family member frothy, consider discussing the participation trophy.

Jeff Walz, head coach of the University of Louisville’s women’s basketball team, offers a prime example. In 2016, he railed against participation trophies after his team lost a game.

“Right now, the generation of kids that are coming through, everybody gets a damn trophy, okay? […] What’s that teaching kids? It’s okay to lose! And unfortunately, it’s our society. It’s what we’re building for.

And it’s not just in basketball, it’s in life. […] Everybody thinks they should get a good job. No, that’s not the way it works. But unfortunately, that’s what we are preparing for. […] I mean, not to be too blunt, but you’re a loser. Like, we’re losers, we got beat. So, you lost. There is no trophy for us.”

Charming. And Coach Walz is hardly alone. Many parents, coaches, and professional athletes believe participation trophies don’t adequately prepare children to face the challenges and disappointments of our harsh world. The result is an entire generation of enfeebled adults who are unable to function or achieve.

“[Participation trophies] are bad for kids, bad for parents, bad for society,” Cobi Jones, former Olympian and midfielder for the Los Angeles Galaxy, said during a PragerU interview. “This belief — that showing up is an accomplishment — is self-destructive because the pain of losing is part of what drives one to improve. […] In the real world, you’re rewarded for achievement, not effort.”

Yep, five inches of cheap golden plastic handed to a five-year-old for picking daisy in left field will be all it takes to diminish his competitive drive, careening him toward a life lacking both meaning and achievement.

Lucky for that kid, and the many others raised with participation trophies, Walz and Jones are not developmental psychologies. Their analysis is based more on a colloquial understanding of what motivates children, and adults, to succeed and not empirical data. 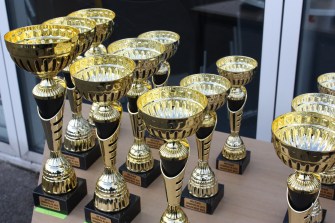 Participation trophies and the developing mind

Detractors worry that participation trophies will indoctrinate children into believing that winning isn’t important and showing up is all that matters. Children will, in turn, grow up to be adults who are both lackadaisical and narcissistic. By providing trophies to winners only can we instill in them a proper of the relationship between hard work, improvement, and achievement.

But this view ignores evidence suggesting that rewards are only a small part of it. According to sports and clinical psychologist Jonathan Fader, a crucial component is the moment when someone discovers that their dedication and efforts have come to fruition. Sometimes that moment culminates in a trophy. But more often, there exist many smaller moments of personal success. Undervaluing that effort and those smaller moments can in turn hinder motivation and improvement.

“But it’s not just the ‘losers’ we need to worry about; it’s the ‘winners’ too. Phrases like ‘You’re a winner’ or ‘You’re a natural’ can actually be toxic to how kids deal with losing,” writes Fader. Such phrases could instill that whether they’re winner or loser is something fixed, beyond their ability to change, even with effort.

Fader points to the works of child psychologist Carol Dweck. In an analysis published in the Journal of Personality and Social Psychology, Dweck and her colleagues reviewed six studies looking at how different types of praise affected a child’s willingness to challenge themselves and perform.

Their analysis showed that children who were praised for their efforts, as opposed to strictly their performance, tended to believe that intelligence is something that could be improved — they strived to do so. Conversely, the children who were praised for being smart were found to be more performance focused. This resulted in them displaying “less task persistence, less task enjoyment, more low-ability attributions, and worse task performance.”

Dweck calls these different views “growth” and “fixed” mindsets, respectively. Her research suggests that if we really want students to improve their skills, a cornerstone of later success, we need to acknowledge and reward efforts, not talent and not exclusively achievement. Participation trophies can be an important part of this approach. 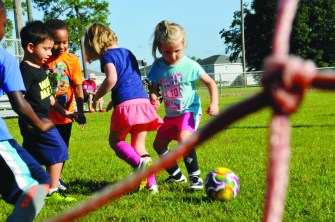 Most children won’t make sports a career, but they can still learn many healthy life habits from the experience: win, lose, or draw. Photo credit: Sgt. Laurissa Hodges / U.S. Army

Overestimating the value of the win

Participation trophy detractors are also prone to incredible leaps in logic. They assume that the lessons learned at a soccer mom’s knee will inevitably, irrevocably transfer from childhood to adulthood and from there to society at large. But this view ignores several facts about how children interact with sports.

For most children, sports won’t be a realistic career goal. Significantly less than 1 percent of high school athletes go professional. If the aim is to make children winners, then statistically our sports programs fail spectacularly.

For the remaining 99 percent, sports will ultimately be about challenging themselves, acquiring habits for an active lifestyle, developing social bonds, and creating fond memories. A participation trophy can become an emotional object, a symbolic reminder of those moments.

“The idea of giving trophies only to the winners doesn’t emphasize enough of the other values that are important,” Kenneth Barish, clinical associate professor of psychology at Weill Medical College, told Today. “We want kids to participate in sports, to learn to improve their skills, to help others, to work hard and make a contribution to the team.”

Walz and Jones’s argument then assumes that sports equip children with the skills and grit to succeed in the adult world, and there is some truth to this. Sports can teach career-transferable skills such as teamwork, communication, and self-discipline. But sports are ultimately a very simplistic analogy for life. They come with a rulebook, a referee, and unequivocal win conditions — things the so-called “real world” conspicuously lack. Off the field, what constitutes success is often ambiguous, contestable, and open to interpretation.

Dweck’s growth-mindset model offers a superior tool for developing mental fortitude. By focusing on effort over achievement, the growth mindset helps people develop resilience to setbacks. And by teaching children to enjoy the effort, not the reward, it allows them to develop their own metrics for what constitutes success in life. 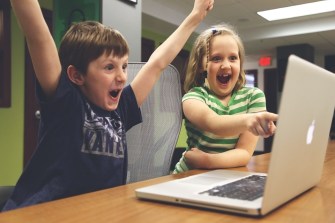 Winning is great, but psychologists argue that we should neither overvalue nor undervalue a child’s efforts.

A new type of participation trophy?

Children aren’t idiots. They understand that not everybody is a winner and that winning is better than losing. They’re equally aware that a first-place trophy is more valuable than a participation trophy (one’s way shiner than the other). This means parents and coaches who hope to provide an emotional Band-Aid will ultimately be disappointed. Participation trophies neither devalue first-place trophies, nor shield a child’s emotions from the sting of losing.

“Participation trophies were worse than no recognition — they were a sop, an insulting suggestion that a trinket could trick you into feeling like you accomplished something,” writes Torie Bosch for Slate.

In truth, there’s a limited window in a child’s life when a participation trophy provides a feeling of true reward and accomplishment. Speaking with Today, sociologist Hilary Level Friedman noted that a good rule of thumb is the “ages that kids still believe in Santa Claus or the Tooth Fairy.” For older kids, participation trophies amount to little more than what Bosch calls “an exquisite shame.”

Nor should participation trophies be offered for simply showing up, even among younger children. Children are more attune than many adults give them credit, and they can perceive when a parent’s excessive fawning is an attempt to hoodwink them.

One study, also published in Social Psychological and Personality Science, found that children’s schoolwork suffers when parents either over- or underpraised their performance. Children whose parents provided accurate, or slightly exaggerated, praise saw the most beneficial results. These results suggest that participation trophies have a place in sports. However, they shouldn’t be one-size-fits-all or used to reward unrealistic accomplishments in the hopes of shielding a child’s emotions.

Dweck shares these concerns. She worries that well-intentioned attempts to promote growth mindsets may result in what she calls “false growth-mindsets“:

“Want to hide learning gaps from [students]? Just tell them, “Everyone is smart!” The growth mindset was intended to help close achievement gaps, not hide them. It is about telling the truth about a student’s current achievement and then, together, doing something about it, helping him or her become smarter.”

And here’s the Shyamalan twist of this debate. Participation trophy detractors like Walz and Jones are ultimately correct: Participation trophies are a bad idea. They’re just right for all the wrong reasons, and their solution to the problem is flawed.

Based on the above research, good practice seems be to giving younger children trophies, but ones that award effort, not just showing up. These trophies would praise individual merit and improvement — whether that’s achieving a PR, improve a specific skill, or even something as simple as getting over fear of the ball. For old children, it’s best to drop the trophies altogether and replace them with praise for effort and growth in tandem with honest discussion on how to improve.

Tags
childrengoal-settinghappinessmotivationparentingpotentialpsychologysocietysportssuccessyouth
In this article
childrengoal-settinghappinessmotivationparentingpotentialpsychologysocietysportssuccessyouth
Related
How to live after your soulmate has died
Astronomer Michelle Thaller explains the healing power of physics after losing her husband.
▸
7 min
—
with
Michelle Thaller
The Future
Space travel will radically change human psychology and spirituality
We are traveling in a realm that once exclusively belonged to the gods. Space travel will force humanity to rethink everything.
Neuropsych
Memory and the benefits of forgetting
Forgetfulness isn’t always a “glitch” in our memories; it can be a tool to help us make sense of the present and plan for the future.
The Learning Curve
5 Stoic quotes to help you through difficult times
“We suffer more often in the imagination than in reality.”
Stoicism: How to turn your sadness into strength
Chloé Valdary shares the ancient Stoic principle that can defeat modern despair.
▸
7 min
—
with
Chloé Valdary
Up Next
The Present
One-third of all slavery is visible from space
Advances in satellite imagery are shining a light.