Every New Year’s Eve, we determine to make the next year better than the last. We promise ourselves that we’ll eat healthier, get more exercise, save more money, and make more friends. Yet we neglect those New Year’s resolutions by February, only to dust them off on December 31.

Trace those New Year’s resolutions through the years, and you’ll notice an unequivocal pattern. Of the 9 most common New Year’s resolutions, every one is inwardly directed. They are self-made agreements to revamp our health, our body images, and our (often entirely self-perceived) inadequacies. While there’s nothing wrong with self-improvement—it’s a laudable goal and necessary for personal growth—it seems our resolutions are missing a vital component.

Time to change strategies. If we truly want to make next year better than the last, maybe our New Year’s resolution shouldn’t be to focus on ourselves but to enhance the lives of others. In fact, research suggests that helping others doesn’t just benefit the recipient. It pays dividends to your health, happiness, and well-being too. 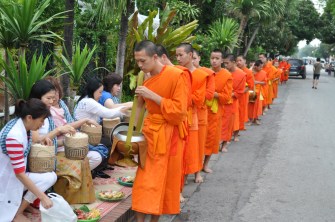 Monks in Laos receive their rice donations from a devout group of women.

The science of selflessness

There have been many studies on the effects of altruism on temperament, and they trend in a uniform direction. Giving to others makes us happier.

To pick one example, a study published in Nature Communications asked participants either to spend money on others or on themselves over four weeks. The group that spent money on others reported a greater sense of happiness than the control group, and they made more generous decisions in an independent decision-making task.

“Although it is difficult to compare results due to the differing study designs, this result is in line with that of a previous experimental study, namely, that participants reported being happier after behaving generously independent of the degree of generous behavior displayed,” the researchers write. They also point out that the increase in happiness was independent of the amount donated, which was also in line with the previous study.

And generosity doesn’t just improve our mental state; studies have shown it can boost our physical well-being, too.

A study published in Pain Management Nursing asked patients with chronic pain to become peer volunteers. The participants reported ameliorated pain and depression for several months after training, with the researchers noting the themes of “making a connection” and “a sense of purpose” emerging time and again in the questionnaires.

Other studies have reported reduced risks of hypertension and improved health in teens. A study published in the APA journal Health Psychology even suggests that selfless volunteering can lengthen your life.

“This could mean that people who volunteer with other people as their main motivation may be buffered from potential stressors associated with volunteering, such as time constraints and lack of pay,” Sara Konrath, the study’s lead author and a social psychologist at the U-M Institute for Social Research, said in a release.

Yes, despite a litany of altruistic advantages, it seems only those motivated by selflessness reap the potential rewards. The Health Psychology study found that people who volunteered out of a sense of duty and compassion lived longer, on average. Those who volunteered for self-oriented reasons did not.

“We’ve known for a long time that volunteering can have benefits not just to the people receiving help but also to those who give their time and energy,” Konrath said. “Of course, it’s reasonable for volunteers to expect some benefits for themselves. But it’s ironic that the potential health benefits of volunteering are significantly reduced if self-benefit becomes a person’s main motive.”

What most people get wrong about volunteering through work

Let’s not overstep and imagine goodwill to be some earthly elixir. Despite these lucrative results, researchers can’t state with certainty that altruism is directly responsible for these bonuses in happiness, reduced stress, and blood pressure.

Study participants who donate their time and money may be more likely to pursue other life-affirming habits. It could be that altruism is the natural outgrowth of a mindset that also leads people to eat healthily, exercise regularly, and spend time with family and loved ones.

Additionally, many of these studies rely on self-reported surveys to gauge happiness and pain tolerances. Altruism may have a placebo effect that makes people feel better, especially when directly asked to rate or recount their good deeds.

With that said, there is evidence to suggest the altruist’s high stems from a physiological response to one’s generosity.

For example, a research team led by neuroscientist Jorge Moll at the National Institutes of Health found that the brain’s mesolimbic system activates when individuals donate money. Also known as the “reward pathway,” the mesolimbic system reinforces favorable behaviors through the release of feel-good hormones such as oxytocin—in the case of this study, donating was linked to social bonding.

“And given the potential benefits to individual health and happiness, this inner feeling of goodness associated with charitable giving may well originate from a conscious or unconscious awareness of its rewarding consequences,” writes Sander van der Linden, a social psychologist at the University of Cambridge.

Philanthropy may be linked to the “resilience factor,” too. This idea posits that people with more resilience are better equipped to handle life’s hardships, stressors, and unexpected losses. Thanks to an abundant supply of those feel-good hormones, philanthropists find such events less devastating and more manageable. In helping others, they have also demonstrated their capability to manifest positive change, empowering them to tackle such problems in our own lives.

“Endless research dollars have been spent attempting to unlock its mysteries in hopes of allowing more of us to sail and fewer of us to get stuck in the muck. It’s still not clear what combination of genetics, upbringing, and circumstances makes one person more resilient than the next. But most experts agree that feeling powerless doesn’t help—and that feeling competent and in control does,” journalist Meredith Maran writes. 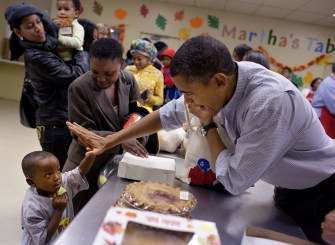 Resolving to succeed this new year

A year of altruism provides an admirable and valuable New Year’s resolution, but it faces the same challenges any aspiration does. How do we prevent this resolution from becoming another lost cause?

Start by reframing how your mind tackles the resolution problem. First, resolve to make helping others your goal for the year. According to a study published in the Journal of Clinical Psychology, New Year’s resolvers reported higher success rates than non-resolvers at modifying a life problem.

Rather than a vague commitment to “be more charitable,” choose a specific goal that you can articulate in a clear, declarative sentence. Something like, “I will volunteer to teach an SAT prep class this school year” or “I will donate 10 percent of my annual income to the Malaria Consortium program.”

Make sure your goals are SMART—that is, specific, measurable, action-oriented, realistic, and time-defined. And remember to kill your inner perfectionist. You may miss a volunteer opportunity because of a rough month. An unforeseen bill may curb what you can donate. That’s okay.

When looking to this resolution, philanthropy adviser Jenny Santi has some advice for making charity a part of your life. Writing for Time, she recommends:

Aristotle once said that the essence of life is to serve others and do good. Making that essence the focus of your New Year’s resolution seems like a good place to start any year.

Tags
cognitive sciencecommunitycompassiongoal-settinghappinesshealthlifemoralitymotivationpersonal growth
In this article
cognitive sciencecommunitycompassiongoal-settinghappinesshealthlifemoralitymotivationpersonal growth
Related
Neuropsych
How do lie detectors work?
Experts explain how lie detectors work, what happens in the brain when we tell lies and how accurate polygraph tests are.
Mind & Brain
Antifragility: How to use suffering to get stronger
What doesn’t kill you makes you stronger. That old adage roughly sums up the idea of antifragility, a term coined by the statistician and writer Nassim Taleb. The term refers […]
13.8
Information is the frontier for the study of life
Life is the only physical system that actively uses information.
The bizarre history of exercise explained in 8 minutes
Harvard professor Daniel Lieberman debunks the ‘10,000 steps per day’ myth.
▸
8 min
—
with
Daniel Lieberman
Health
Stockdale Paradox: Why confronting reality is vital to success
Balancing realism and optimism in a dire situation is a key to success.
Up Next
Starts With A Bang
These Are The Most Distant Astronomical Objects In The Known Universe
Astronomy’s enduring quest is to go farther, fainter, and more detailed than ever before. Here’s the edge of the cosmic frontier.Astronomers have always sought to push back the viewable distance […]