“A peculiar characteristic of the human organism when it is dominated by a certain need,” wrote psychologist Abraham Maslow, “is that the whole philosophy of the future tends also to change. For our chronically and extremely hungry man, … life itself tends to be defined in terms of eating.”

This serves as a good example of his model of human development, the now well-known “hierarchy of needs.” At the bottom of this hierarchy are the physiological needs — without a reliable source of food, human beings define their lives “in terms of eating.” But as those baser needs become satisfied, we find ourselves needing more and more sophisticated things: shelter, love, esteem, and then, at the pinnacle of the pyramid, self-actualization. This refers to our need to realize all our potential, to become everything that we can be.

But toward the end of his life, Maslow began to have some doubts about this model. In his personal journal, published only after his death in 1970, Maslow wrote:

“All sorts of insights. One big one about [self-actualization] stuff, brought on, I think, mostly by my deep uneasiness over articles. . . . I realized I’d rather leave it behind me. Just too sloppy & too easily criticizable. Going thru my notes brought this unease to consciousness. It’s been with me for years. Meant to write & publish a self-actualization critique, but somehow never did. Now I think I know why.”

What was this developing crisis about? Why did Maslow want to revise the hierarchy that he would ultimately become famous for? The answer is that he had realized the hierarchy was incomplete. Self-actualization wasn’t the pinnacle of his pyramid — self-transcendence was. 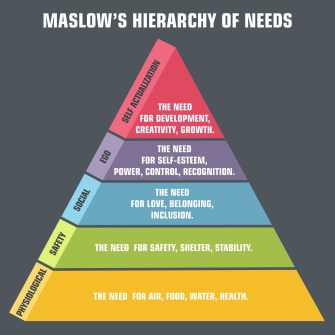 Maslow’s original hierarchy of needs without the addition of self-transcendence.

Part of these criticisms that Maslow and others had with the idea of self-actualization was that it was directed entirely on the individual. Self-actualized people become what they are individually capable of being, but scholars have argued that this excludes a concern for others. A self-actualized person under this definition might care for others, but it is by way of satisfying their own need to be an individual that cares for others.

“In one individual,” wrote Maslow “[self-actualization] may take the form of the desire to be an ideal mother, in another it may be expressed athletically, and in still another it may be expressed in painting pictures or in inventions.” The “ideal mother” may have a genuine concern for their child, but they are not self-actualized because of that concern; they’re self-actualized because they were motivated to become as talented a mother as they could be.

Maslow defined peak experiences as “feelings of limitless horizons opening up to the vision, the feeling of being simultaneously more powerful and also more helpless than one ever was before, the feeling of great ecstasy and wonder and awe, the loss of placing in time and space with, finally, the conviction that something extremely important and valuable had happened, so that the subject is to some extent transformed and strengthened even in his daily life by such experiences.”

While self-actualizers experience this, he believed that peak experiences were a means of becoming more than just the self:

“As [self-actualized individual] gets to be more purely and singly himself he is more able to fuse with the world, with what was formerly not-self, for example, the lovers come closer to forming a unit rather than two people, the I-Thou monism becomes more possible, the creator becomes one with his work being created, the mother feels one with her child.”

This accounts for a gap in Maslow’s humanist psychology tradition. Transcendent experiences are the focus of such a wide variety of world cultures — notably Eastern cultures and shamanistic traditions — that it would be an omission to ignore such a pursuit from any model of human development, like the hierarchy of needs. In his later thinking, Maslow realized how to reconcile the Western, individual-centric idea of self-actualization:

“The goal of identity [self-actualization] seems to be simultaneously an end-goal in itself, and also a transitional goal, a rite of passage, a step along the path to the transcendence of identity. … If our goal is the Eastern one of ego-transcendence and obliteration, of leaving behind self-consciousness and self-observation, … then it looks as if the best path to this goal for most people is via achieving identity, a strong real self, and via basic-need-gratification.”

Thus, human beings may feel a strong need to become all that they can be, but once this need is met, some continue to feel needs beyond the self, to pursue goals that may in fact have little to do with the self at all.

Why is it that this revision to the hierarchy of needs, made by the creator of the concept himself, is not better known? There are a few reasons.

The first is simply bad timing. Maslow first began to conceptualize this additional level in 1967. Later that year, he had a major heart attack and was seriously weakened. He was busy with his convalescence, his other duties as the president of the American Psychological Association, and with lecturing at various colleges until a second, ultimately fatal heart attack struck him in 1970 while he was jogging.

Second, he only published his findings in a little-known journal at the time, and his personal journals were not published for some time after his death.

Third, the concept of self-transcendence dips its toes into the spiritual or mystical, something that psychologists avoid doing even to this day. Of course, one doesn’t have to embrace pseudoscience or the supernatural to study the human being’s predilection for the mystical. Human beings have a drive to become more than their individual selves, a desire that should be studied regardless of whether it manifests in religious, spiritual, or mystical settings.

The lack of such a study is arguably one of the reasons why Maslow felt his hierarchy to be incomplete.

Sorry, Astronomy Fans, The Hubble Constant Isn’t A Constant At All

If your Universe contains any matter at all, a constant Hubble parameter is absolutely impossible.Our observable Universe is an enormous place, with some two trillion galaxies strewn across the abyss […]