What makes somebody materialistic? We know what materialism looks like—constantly pursuing luxury, envying others for their success, desiring more possessions, and being greedy. It’s even been shown that materialistic people have worse mental health, a lower sense of well-being, and a general disregard for the environment. But what makes somebody turn out this way is less clear. Could it be genetic? Some result of their upbringing?

New research in the International Journal of Psychology has helped shed light on what it is that makes materialistic people desire physical wealth. Broadly, materialism turns out to be the answer for certain people when they get their hearts broken.

The materialistic and lonely heart

But not everybody is going to win father or mother of the year. Some parents are cold or neglectful to their children, and, lacking that crucial, initial sense of acceptance, many neglected children grow up to have attachment issues.

Attachment styles come in four major flavors, but this study focused on two problematic forms: attachment anxiety, in which an individual obsessively seeks approval and affection, often in a smothering way that’s impossible to truly measure up to; and attachment avoidance, in which an individual simply avoids attachments with others to avoid getting hurt, fostering instead a (often false) sense of independence from others.

A study by Ying Sun and colleagues from the Beijing Key Laboratory of Experimental Psychology examined the interaction between attachment issues and materialism. Prior research had shown that materialism is frequently associated with having cold or neglectful parents and a shaky interpersonal or social life, so it made sense to test whether attachment issues were the mechanism behind a desire for external, physical wealth. 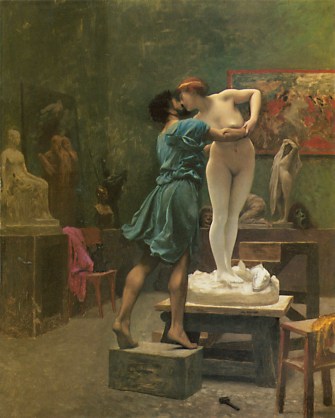 In Greek mythology, the sculptor Pygmalion fell in love with a statue he carved from marble. In his case, Aphrodite brought his statue to life.

Studying the link between attachment and materialism

Sun and colleagues carried out a series of studies exploring the connection between attachment issues and materialism. In the first, 237 participants filled out a survey designed to assess attachment issues, asking participants to respond to statements like “I worry that partners won’t care about me as much as I care about them” and “I am nervous when partners get too close to me.”

They also asked for participants’ responses to statements on materialism, like “I like a lot of luxury in my life” and “My life would be better if I owned certain things I don’t have.” As predicted, highly attachment-anxious people were indeed more materialistic.

The next study tested whether attachment issues were truly a cause of materialism by artificially bolstering the participants’ sense of attachment and then measuring materialism afterwards. The researchers asked half of the participants to think of somebody they turn to for help and assurance, imagine their face, and then describe a situation where that person helped them in detail. As a control, the other half of the study sample was asked to recall an acquaintance and describe a scenario in which they interacted.

Then, the researchers presented the participants with a task designed to measure materialism. The participants viewed a series of words on a computer screen that were materialistic (“money”), neutral (“sky”), or a nonsensical collection of letters. They were told to press a key if the word was meaningful or another key if the word was meaningless.

By measuring the response times to the different categories of words, the researchers were able to determine how accessible materialistic thoughts were to the participants. Highly materialistic people in the control group were able to quickly determine that words like “money” did indeed have meaning—quite a lot of meaning for them.

However, the participants who had been primed to feel an interpersonal connection with another person were slower on the draw: Those words seemed to lack the immediacy and importance that they had before. It’s important to note that, as per the researcher’s hypothesis, the effects of this study were stronger in participants with attachment anxiety rather than attachment avoidance.

At first glance, these findings might seem very depressing. The lonelier you are, the more likely you are to pursue material things to fill that hole in your heart. But, there’s also a more optimistic way of interpreting these results. Materialism may be a temporary and ineffectual solution to a larger problem, but once a lonely person gets what they really need, the crutch is no longer necessary.

If love is an addiction, your first love is the first dose.
Mind & Brain

Research has shown the benefits of mindfulness, but the current mindfulness craze cannot deliver on its overhyped promises.
Strange Maps

One of the best-known allegorical depictions of love has a rather pessimistic male twin.
The Past

Searching for happiness in the midst of personal or societal crises are nothing new.
The Present

Your emotional brain is being manipulated to shop more, but there are ways to resist.
▸
6 min
—
with
Big Think
Up Next
The Present

Human extinction! Don’t panic; think about it like a philosopher.

Most people think human extinction would be bad. These people aren’t philosophers.