Cute things are usually vulnerable, fragile and weak. But cuteness itself is mighty indeed. Morten L Kringelbach and his colleagues at the University of Oxford recently described cuteness as ‘one of the most basic and powerful forces shaping our behaviour’. And yet, despite its elemental importance, cuteness might be a fluid, evolving concept and trait.

The word emerged as a shortened form of the word ‘acute’, originally meaning sharp, clever or shrewd. Schoolboys in the United States began using cute to mean pretty or attractive in the early 19th century. But cuteness also implies weakness. Mignon, the French word for cute or dainty, is the origin of the English word ‘minion’, a weak follower or underling. Kawaii, a Japanese word referring to a similar concept, appears to have been first used in the 11th century to mean pitiable.

Yet the mascots of Japanese kawaii today are not always so pitiable. Pikachu, a rat-like creature from the videogame franchise Pokémon, can conjure bolts of searing electricity to attack opponents. But Pikachu’s infantile features – large eyes, plump red cheeks and a disproportionately large head – make this not-so-pitiable Pokémon paradoxically innocent, lovable and cute.

Cuteness could be an evolving linguistic concept because its defining characteristics were perhaps considered obvious or even ineffable for much of history. It was not until the 20th century that the Nobel laureates Konrad Lorenz and Niko Tinbergen described the ‘infant schema’ that humans find cute or endearing: round eyes, chubby cheeks, high eyebrows, a small chin and a high head-to-body-size ratio. These features serve an important evolutionary purpose by helping the brain recognise helpless infants who need our attention and affection for their survival.

In fact, cute judgments might be fundamental to human perception. Examining magnetic brain activity in subjects presented with infant and adult faces, Kringelbach and his colleagues at Oxford have found that the brain starts recognising faces as cute or infantile in less than a seventh of a second after the face is presented to subjects. His group has concluded that cuteness is a key that unlocks the brain’s fast attentional resources before also influencing slower brain networks responsible for compassion and empathy.

If cuteness is such an important key, might a locksmith counterfeit a master key? Decades ago, Lorenz and Tinbergen also introduced the concept of a supernormal stimulus: a stimulus far more salient or intense than any occurring in nature. In a classic experiment, Tinbergen discovered that geese preferred to roll volleyballs towards their nests over real goose eggs. In fact, volleyballs are supernormal stimuli because their big, round, white shape is more egg-like than real goose eggs.

Similarly, Pikachu’s baby-like features might exceed those of real infants, making the character a supernormal stimulus: unbearably adorable, but without the high maintenance of a real baby. Needless to say, our ‘sense of cute’ did not evolve to nurture faux animals such as Pikachu, but our brains have been hijacked nonetheless by the unnaturally big eyes and childlike features of such cute characters. Similarly, our ability to sense sugar in food did not evolve for us to enjoy chocolate milkshakes, but to steer us towards naturally occurring sources of sugar in fruit and other foods. 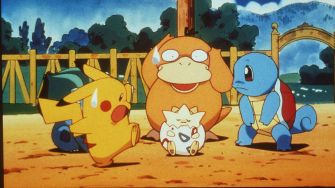 Cute cartoon characters, junk food, videogames and other supernatural stimuli might engage the nucleus accumbens, a critical piece of neural machinery in the brain’s reward circuit. The nucleus accumbens contains neurons that release dopamine, a brain chemical that, among other things, encodes such stimuli. Much like drugs of abuse, supernormal stimuli are hypothesised to activate the nucleus accumbens, directing the brain’s full attention towards the reward in question. An international team of researchers studied the phenomenon by artificially manipulating the infant schema of baby faces in photographs to create what might be considered supernormal stimuli – faces more or less baby-faced, or cute, than a normal infant might appear. Women were presented with the real and manipulated images while their brains were scanned using functional magnetic resonance imaging (fMRI). As the researchers hypothesised, the heightening or diminishment of cuteness had a significant effect on metabolic activity in the nucleus accumbens, suggesting that this brain region both responds to supernormal stimuli and plays a crucial role in triggering altruistic, nurturing behaviour towards babies.

Other supernormal stimuli, such as refined sugar, can activate the brain’s reward circuitry in a similar manner. Research at Pennsylvania State University has also shown that dopamine activity in the nucleus accumbens of lab rats is proportional to the amount of sugar-water that the rats ingested. Similarly, researchers in Oregon have shown abnormal brain activity in the caudate nucleus – a brain region adjacent to the nucleus accumbens, and also involved in reward – when obese adolescent girls consume a chocolate milkshake. It seems that infant cuteness, sugar content and other rewarding stimuli can all be manipulated to give privileged access to the brain’s attentional system. In the brain’s reward circuit, Pikachu is a chocolate milkshake.

These heightened stimuli seem to throw the brain’s concerns into disarray. But even before videogame characters and unhealthy foods wrestled our attention from helpless babies and wholesome foods, cats, dogs and other pets found a strange way of winning important resources from humans. Perhaps Kringelbach and colleagues are justified in calling cuteness a ‘Trojan horse’. Why do humans feel the need to nurture other species? Why are puppies, kittens and bunnies sometimes cuter than babies?

Studying infant development might help us find answers. Unlike other mammals, humans are born with underdeveloped brains so that the cranium can fit through the mother’s birth canal. This also allows for shorter pregnancies, decreasing the burden on the mother. As babies mature into toddlers, they are perceived as being cuter – despite being less helpless than neonates – presumably due to a temporary exaggeration of infantile facial features. Dogs, on the other hand, mature faster after birth, going from blind pups to cute, doggie-eyed puppies in a mere two weeks.

And so, in a strange quirk of evolutionary psychology, canines and felines have won almost the same attention from humans as our own offspring. Indeed, the science of cuteness is simultaneously intuitive and bizarre. Two hundred years ago, cuteness might have still been an emerging linguistic concept in English. Today, it is recognised as a fast ticket to crucial neural resources that control attention, love and caring.

Research into infantile appearance reveals the chilling superficiality of human affection. Why can’t love be won based on deeper criteria? But like a biological computer, the brain needs heuristics – a set of programmed guidelines – to identify beings that are likely to be helpless, needy infants. Kringelbach and his colleagues hope that understanding these heuristics will help us come up with a way of relieving the effects of cleft lip and postpartum depression on the mother-child relationship. Or, perhaps such knowledge will spell the ingredients for a cuter Pokémon. Either way, with an increased cultural awareness of cuteness, bigger eyes and rounder faces are here to stay.

An independent researcher looks into why there’s such strong opposition to her research.
Up Next
Personal Growth

These 5 psychological traits can help you live a longer, happier life

Many participants smoked and drank, and enjoyed the benefits of health and longevity anyway.