The new Netflix dramaThe Kindergarten Teacher offers viewers a complex and uncomfortable narrative. Lisa Spinelli is worried that her teenage children are caught in the clutches of materialism and inattention. Her daughter barely looks up from her phone, having already given up a passion for print photography; her son, instead of pursuing an intellectual path, has chosen to enter the Marines, where, according to his mother, he’ll only be fighting for oil. It’s not surprising she becomes obsessed—disturbingly so—with her student, a five-and-a-half year old poet named Jimmy Roy. When Spinelli (Maggie Gyllenhaal) confront Jimmy’s father, Nikhil, in his Bayonne night club, the elder Roy brushes aside his son’s poetic pursuit in favor of making money. (Ironically, the actor, Ajay Naidu, an old friend, is one of the most artistic and poetic people I’ve ever met.) This story is not new, but it does ask a pressing question of parents today: In a culture consumed by micro transactions conducted on a device that consumes all attention, how do you raise your child in a non-materialistic matter?

Kidnapping a five-year-old to cross the Canadian border is not the answer. Research conducted at Villanova University, recently published in the Journal of Positive Psychology, offers a different approach: teach your child to be grateful.

The team, led by Lan Nguyen Chaplin (now at the University of Illinois at Chicago), noticed that rising materialism in American culture has led to an uptick in anxiety and depression, greater likelihood that children will get hooked on addictive drugs, and an increased chance they’ll display selfish attitudes and behaviors as they age. 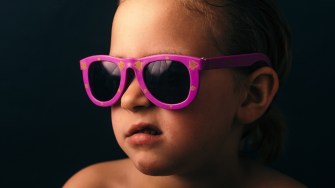 Gratitude is a well-studied behavior. Dr. Robert Emmons at the University of California, Davis spent eight years intensively studying gratitude. His research found having an ‘attitude of gratitude‘ improves emotional and physical health, as well as strengthens relationships and communities.

One of Emmons’s studies found that people who kept a gratitude journal exercised more frequently, reported fewer physical symptoms of pain, and were more optimistic about the upcoming week, compared to those who kept journals that were either neutral or that allowed them to complain. He also found that those who kept gratitude lists made greater strides in progressing towards personal goals over a two-month period.

In another study with young adults practicing daily gratitude exercises, those who partook reported higher levels of alertness, enthusiasm, determination, attentiveness, and energy compared to the control group, who were either told to focus on downward social comparisons or that they were better off than others.

Expressing gratitude is a personality trait that seems to have the strongest ties to overall life satisfaction. In a series of “gratitude visits,” in which people wrote a letter and then delivered it to someone who had helped them substantially at some point in their lives, their happiness scores rose by 10 percent and depression scores dropped significantly. Gratitude appears to be uniquely important for both psychological wellbeing and in social relationships.

Chaplin’s paper focuses on two studies. In the first, she found that the more children expressed gratitude, the less likely they were to be materialistic. A total of 870 adolescents between 11-17 responded to four items centering on how thankful they are for people and possessions. When gratitude was lower on the scale, desire for objects was higher.

The results of this survey study indicate that higher levels of gratitude are associated with lower levels of materialism in adolescents across a wide range of demographic groups.

Massive Attack: Be Thankful For What You Got

In the second study, Chaplin made the project more proactive. As with Emmons’s studies, one group of adolescents within the same age group kept a daily gratitude journal; the other, a journal tracking daily activities (the control). After two weeks, the journals were collected and measured using the same scale as in the first study.

Each participant was given ten $1 bills. They were told they could keep all of the money or donate some or all of it to charity in an unmarked envelope. The instructor invented a reason to rush out of the room, so the decision to contribute was private—the child merely needed to drop it into a locked box.

The results showed that adolescents who were encouraged to keep a gratitude journal were less materialistic than their counterparts who kept a daily journal. The experimental group was also more generous compared to the control.

In fact, children keeping gratitude journal donated 60 percent more than the control group. The researchers note that a journal is not the only means of achieving such a result. As they conclude,

As adults, we can appreciate such sentiments. Whenever you meet someone who feels they’re owed something, the first instinct is to flee the scene. Gratitude has been part of many religious traditions: simply being thankful that you’re alive is a long-standing means for connecting to a deeper part of yourself and your community. Knowing that such an attitude helps children frame their mental health in positive ways is reason enough to pass this knowledge on to them.

If love is an addiction, your first love is the first dose.
Neuropsych

In a way, the human brain is like three brains in one.
Thinking

Birthrates are cyclical and have gone up and down throughout history.
Neuropsych

Money can buy happiness — if you spend it on others, research suggests.
Up Next
Health

Cancer researcher says keto is not a fad diet

Anatomy and physiology professor David Harper claims a recent study in The Lancet is flawed.