Jason Long hated his job. A pharmacist in rural Tennessee, Long dealt daily with angry and confused customers battling drug costs, the opioid epidemic, and health insurers cutting costs at the expense of the ill. He had to work 12- to 14-hour shifts just to keep up. He couldn’t eat, and his health suffered from the stress.

Enough was enough. Long walked away from a $150,000 salary, choose to live off his investment portfolio, and retired at 38 years old.

As reported by The New York Times, Mr. Long is a forerunner to a movement of millennials aiming to retire well before their golden years. Called the FIRE movement — for “financial independence, retire early” — proponents believe frugality is the key to reaching early retirement in their 40s, 30s, or even their 20s.

Conditioned to consume: How the economy grew past its natural boundaries

The FIRE movement is a loose conglomerate of blogs, forum groups, and Reddit discussions. Gathering online, members share tips and stories on how to manage finances to maximize savings and minimize spending to propel one to early retirement.

If the camp has a catalyzing figurehead, it would be Vicki Robin and her 1992 book, Your Money or Your Life. Robin’s message was to show readers how to increase their savings through strict budgeting and mindful spending.

“What we teach is an awareness about the flow of money and stuff in your life in light of your true happiness and your sense of purpose and values,” Robin told Big Think. “And that your ‘enough point,’ having enough, is having everything you want and need to have a life you love and full self-expression with nothing in excess.”

Recently, millennials have rediscovered Robin’s book and followed its principles in their search for early retirement. Mister Money Mustache, a popular FIRE blogger who retired in his 30s (real name Peter Adeney), even provided the forward for the 2018 revised rerelease of Your Money or Your Life.

However, it should be noted that Robin isn’t the founder of the FIRE movement, more its inspiration. Environmentalism is a core feature of Robin’s message, and for her lean living is as much a way to find happiness as it is to save the planet. “We have measured the amount of planet we have and humans are consuming more than the amount of planet we have every year (that can be regenerated) ever since 1986,” Robin notes.

The FIRE movement, on the other hand, does not maintain a green message at its core. Instead, members seek out their own reasons for financial independence and early retirement (of course, there’s no reason ecological stewardship can’t be one of those driving forces). The question for them isn’t why you want financial independence, but how you go about it.

Holding one’s finances to the FIRE

Have you ever spent time listening to fans of a popular online roleplaying game discussing how to min-max their wizards for the upcoming raid? If so, then you’ll get a sense of déjà vu reading posts at FIRE blogs or Reddit pages. These sources are replete with users discussing the mathematical details of their FI setups, graphing their 401K contributions vs. gains, and devising grocery lists based on calorie to dollar ratio.

Their patois is also highly reminiscent of online-based groups like gaming culture. As noted in the Times article, members are said to be “firing” when they maximize savings while minimizing excessive spending (i.e., min-maxing). When they have achieved their financial goal, they are said to have “fired.” Different levels of FIRE engagement also exist — “lean FIRE” is for extreme frugality, “fat FIRE” for more typical savings, and “barista FIRE” for working part-time after retirement (i.e., hardcore vs. casual gamer). And what would an online culture be without a bevy of initialisms, such as SWR (safe withdrawal rate).

It shouldn’t be surprising that FIRE’s most publicized figures tended to come from highly technical fields such as engineering and healthcare before becoming “fired.” Mister Money Mustache was a software engineer; EarlyRetirementDude had a career in banking; Mr. and Mrs. Frugalwoods were a software engineer and communications manager, respectively; and Jason Long, as we saw, was a pharmacist.

But how does one start “firing”? As noted by Kristin Wong at Lifehacker, it’s deceptively simple. All you have to do is “spend less than you earn” and save the remainder, meaning it all comes down to the “math and mechanics.”

FIRE advocates look at their income, budget mandatory expenses, and then ruthlessly cut discretionary spending in order to maximize their savings. They’ve devised many life hacks to accomplish this, such as minimizing housing costs, seeking cheaper services, not purchasing expensive depreciable goods, lowering tax liability, and being mindful of spending money on unnecessary goods (looking your way, bar tab).

Ultimately, the goal is to reach a point where their expenses line up with how much they can sustainably withdraw from their portfolios, ensuring they still have enough money down the road. This is colloquially called the “four percent rule” — so called because 4 percent is the amount a retiree can typically withdraw from investments.

While simple in principle, this is the kind of thing that’s made “it’s easier said than done” such a cliché. It’s difficult to manage such frugality or know the best ways to invest your money. But those who have fired seem to enjoy the challenge as much as the results. 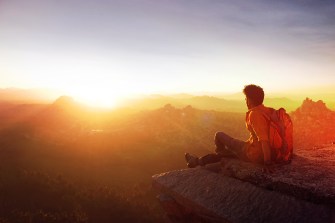 A young backpacker enjoys early retirement, yet many argue that FIRE strategies don’t properly plan for the unexpected realities of the sunset years.

A cynical critic may point out that the FIRE movement’s more successful champions haven’t retired in the traditional sense. Mister Money Mustache hosts advertisements on his blog. Early Retirement Dude and MadFientist both utilize affiliated links to earn fees. Ms. Frugalwoods is the author of a book published by HarperBusiness and the Frugalwoods’ blog also publishes affiliated endorsements.

These early retirees haven’t so much retired as switch jobs to self-employed promoters of the early retirement ideal. But as Tanja Hester, early retiree and blogger at our next life, told Lifehacker, FIRE isn’t really for people who hate their job and want to quit working.

“A good reason to retire early is that you have an alternative vision for your life that you are eager to pursue, but which you can’t pursue while employed full time,” Hester said. “Achieving financial independence allowed us to leave that career chapter of our lives from a place of gratitude and appreciation, and move onto our next chapter that we’re in control of.”

Fair enough, and “FIRE” without early retirement doesn’t sound so catchy. Then it’s just “FI.” However, there are two other criticisms of the movement that potentially carry more weight.

The first, as stated by financial advisor Suze Orman, is that early retirement is a myopic pursuit that greatly underestimates the costs and pitfalls of future living. Orman notes that rising healthcare costs will make the golden years more expense for future retirees and that planning for senior health needs in one’s 30s is difficult. She also believes that early retirees underestimate loses in compound returns.

The general rule is that you need 10 times your current income to retire. Calculating for average returns of 6 percent and inflation at 2.5 percent, the AARP estimates a retiree would need $1.18 million to draw $40,000 per year for 30 years. Depending on where you live, that figure may fall within the lower income bracket. (Check out the Pew Research Center’s income calculator to find out where your income falls for your area.)

And even may not be enough. Speaking with AARP, wealth advisor Dan Yu points out that spending rarely decreases after retirement. Vacations are taken more often, cost of living continues to climb, and inflation and interest rates can fluctuate. Adding to this financial uncertainty is the fact that people are living longer. On average, men reaching 65 today will live to be 84 years old, women 86, meaning investments much stretch further than in previous generations.

The second criticism is that the FIRE movement is less about prudence and more about privilege. Opponents argue that FIRE successes aren’t the result lean living. Plenty of people live frugally out of necessity already. Rather, it is glorified virtual signaling offered by those who already enjoy the benefits of above-average incomes and access to capital.

“What [FIRE evangelists] have embraced is a model of advice-giving that mostly involves telling self-congratulatory stories about how they achieved financial independence by being frugal,” Miles Howard wrote at The Outline. “And that’s a shitty idea to perpetuate. Because whatever happens in the years ahead, penny-pinching will likely remain a lifestyle enhancement for bourgeois Millennials who posses enough money to enjoy the dividends of being thrifty. For most of us, there are no dividends: just thrift.”

By now you’re probably either excited to learn more about FIRE strategies or have written the movement off as another online fad. Either response is acceptable; you do you. But when making financial decisions, be sure to seek out professional financial advice, preferably from a fiduciary. FIRE or no, the last person you should seek financial advice from is some online rando.

Searching for happiness in the midst of personal or societal crises are nothing new.
The Present

Our brains did not evolve to shop on Amazon.
The Present

The questions about which massive structures to build, and where, are actually very hard to answer. Infrastructure is always about the future: It takes years to construct, and lasts for years beyond that.
Up Next
Hard Science

Researchers at Japan’s Tohoku University might be clearing the way for space travel.