“What I did is not such a great harm, with all these surplus women nowadays. Anyway, I had a good time.” — Rudolph Pliel, convicted of murdering 10 people

Lack of empathy — the ability to understand and share the feelings of others — is one of the most often cited traits of psychopaths. This inability is also common among individuals who score high in the “dark triad” of personality traits: narcissism (entitled self-importance), Machiavellianism (strategic exploitation and deceit) and psychopathy (callousness and cynicism).

But new research suggests that these individuals are able to understand and share others’ feelings — they’d just rather not.

“There seems to be so many misunderstandings about ‘normal’ psychopaths among us,” study author Petri Kajonius, an associate professor in psychology at University West in Sweden, told PsyPost. “Sometimes psychopaths (people with dark traits) are understood as callous persons, not being able to empathize with others, while at other times they are understood as fully functional in that regard, but just don’t care. We wanted to find out what the data in a HR-community sample, purposed to be in tune with personnel, would say?”

The study — published in the journal Personality and Individual Differences — was based on a survey of 278 participants affiliated with the field of human resources. The results showed that people who scored high on the “dark triad” personality traits tended to agree with statements like “Sometimes I don’t feel very sorry for other people when they are having problems,” and “Other people’s misfortunes do not usually disturb me a great deal.” 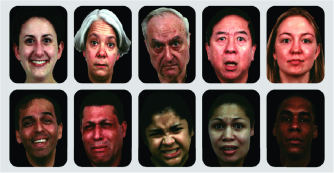 To test whether these individuals possessed the ability to empathize, all of the participants completed the Multifaceted Empathy Test, in which they looked at images of people expressing various emotions and had to identify what emotion each person was experiencing. Those who scored high in dark triad traits did just as well as everyone else. But these individuals express a much lower disposition to do, possibly because it often does not help them achieve their goals. The results also showed that cognitive ability was positively associated with the ability to empathize.

The recent study echoes past research that suggests psychopaths have something like an “empathy switch” that they can turn on and off at will.

“The predominant notion had been that [psychopaths] are callous individuals, unable to feel emotions themselves and therefore unable to feel emotions in others,” Christian Keysers of the Netherlands Institute for Neuroscience told the BBC. “Our work shows it’s not that simple. They don’t lack empathy but they have a switch to turn it on and off. By default, it seems to be off.”

The question is whether any treatment could convince “dark triad” individuals to keep that switch set to “on.” There’s also questions about exactly what empathy means — just because psychopaths’ brains might light up in similar ways upon viewing facial expressions, or just because they can identify certain emotions, doesn’t mean that they’re actually experiencing empathy normally.

“From what I’ve read, what I’ve heard, what I’ve seen and experienced so far, people with dark triad personality disorders cannot and will not change,” Perpetua Neo, a doctor of psychology and therapist, told Business Insider.

Our ancestral cousins far more intelligent than we credit them for, and they did things most of us cannot.
Mind & Brain

"I suddenly woke up one day and thought, you idiot, you are letting your life fade away, you have got to do something."
Up Next
The Present