Violence has become such a part of the fabric of American society that many stories pass without much commentary. Mass shootings need to be bigger and grander than ever to stay in the headlines; solo homicides rarely receive a glance. We pass over news about increasing suicide rates as if it is to be expected. And then there’s Chandler, Arizona.

Perhaps we haven’t been discussing these attacks because their victims are not humans, or even animals, but members of the Waymo fleet. Chandler residents are frustrated over the emergence of self-driving cars. At risk: human autonomy.

Busy hands and our brains

Sure, the Luddites were concerned about feeding their family, not weaving cotton per se, but losing such an integral part of your identity forces you to confront your value as a sentient being. The combination of repetitive movement (of say, knitting) and the production of a tangible product (a hat or scarf) can be therapeutic. Lambert coined the term “behaviorceuticals” to honor this valuable drug. 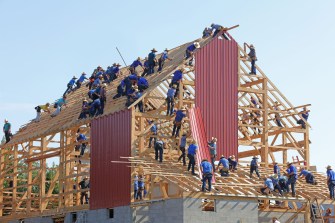 Matthew Crawford agrees. He was “always sleepy” while employed at a D.C. think tank. Though earning more money than ever before, he felt a valuable piece of himself being lost. He left the lucrative position to become an auto mechanic, which resulted in his 2009 book, Shop Class as Soulcraft.

In it he posits the idea that as a society we’ve gotten the role of work backwards. Instead of championing manual labor, which he says is more intellectually engaging than his desk job, we choose to financially and socially reward careers that rely on computers to work for us. With industrialization came automation as warehouse owners sought to maximize capital while minimizing labor costs. In this two-century-long process, an essential part of our humanity is gone. As Crawford writes:

And that, as the CBS Sunday Morning broadcast above puts it, is also stealing from us our happiness. Yet “happiness” is a fleeting term; better put, our sense of meaning is gone. According to Pew, between 1980-2015, desk jobs increased 94 percent while physical labor only went up 12 percent. While there is value in any form of engaging work, the loss of working with our hands means we no longer engage with our environment. It’s no wonder anxiety and stress rates are skyrocketing.

His sense of pride came through in every unit, saying, “We did this.” In Tools of Titans, Wired co-founder Kevin Kelly says everyone should build their own house, that it’s not as hard as you think. Carl Jung, in fact, did just this. The famed psychologist, a man who changed how we think about ourselves and our brains, put it best when describing his creation, a message we should all consider when contemplating the sense of meaning we get when working with our hands:

Tags
cognitive sciencehappinesshealthhuman bodyneurosciencepsychologywork
In this article
cognitive sciencehappinesshealthhuman bodyneurosciencepsychologywork
Related
Health
New blood types are often discovered following medical disasters
New blood types are regularly discovered by an unusual absence or an unusual presence — both of which can result in tragedy.
The neuroscience of loving music
Humans are musical animals four million years in the making, explained by music expert Michael Spitzer.
▸
8 min
—
with
Michael Spitzer
Neuropsych
How you breathe affects your brain
Your breathing rhythm influences a wide range of behaviors, cognition, and emotion.
Health
What happens when regular porn watchers abstain for a week?
Researchers watched for signs of withdrawal — but didn’t find any.
Neuropsych
Daily caffeine intake temporarily alters your brain structure
Compared to people who took a placebo, the brains of those who took caffeine pills had a temporarily smaller gray matter volume.
Up Next
Health
Engineers create an inhalable form of messenger RNA
Patients with lung disease could find relief by breathing in messenger RNA molecules.