It should come as no surprise that we tend to look for a sense of humor in our romantic partners. The trouble is, we all find different things funny—or not funny. New research in the Journal of Research in Personality quantifies exactly how our particular blend of humor affects our relationships. The bottom line? You’ll do better if you can take a joke.

Gelotophobes are, as you might expect, kind of a bummer. Prior research has shown about 10% of people experience a fear of laughter bordering on paranoia. When they hear people laughing in public, their first thought is “Are they laughing at me?” They have trouble distinguishing between laughter that has positive connotations (“Your shirt is hilarious!”) and laughter with negative connotations (“Your shirt is ridiculous!”). Uncertain of the laugher’s intentions, they assume malicious intent.

The real gems are gelotophiliacs—those people who get a kick out of being laughed at. This quality might sound like masochism, but its really borne out of a sense of humility and humor. Unlike gelotophobes, gelotophiliacs find laughter as a positive thing, and they seek it out. These are your class clowns and stand-up comedians. Self-deprecation is a gelotophiliac’s bread and butter. 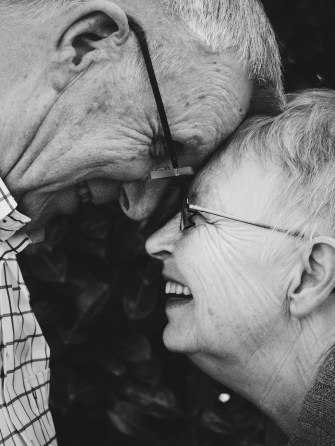 The researchers found that gelotophiliacs were more likely to expect their relationships to last a long time.

How does this work in a relationship?

To figure out which sense of humor performed best in a relationship, the researchers first gave 154 heterosexual couples a questionnaire designed to identify people as mostly gelotophobic, gelotophilic, or katagelastic. Then, they administered two other questionnaires designed to measure the quality of couples’ relationships. These evaluated relationship dimensions like sexuality, fascination, communication, overall happiness, and similar variables.

First, the researchers found that birds of a feather do indeed flock together. Most couples had similar scores in each humor category.

Broadly, the results broke down much in the way one would think. Gelotophobes—who tend to perceive themselves as unattractive and generally underestimate themselves—were less sexually satisfied, did not trust their partners very much, and felt constrained by their relationship. Overall, they were fairly unhappy. Living life thinking that everybody is secretly mocking you tends to do that.

Interestingly, katagelasticism was unrelated to relationship satisfaction. It seems like couples that enjoy making fun of one another are just as likely to be blissfully content or miserable. However, katagelastic couples did have more arguments, which is kind of a natural consequence of constantly making jokes at your partner’s expense. In addition, when the man in the relationship was katagelastic, both he and his female partner were less sexually satisfied.

Gelotophilic couples were made in the shade. They reported significantly higher relationship satisfaction and happiness. But this result becomes a little more nuanced when we start looking at the two sexes.

The Crucial Difference Between Confidence and Ego: One Is Earned, the Other …

How can you develop healthy humor habits?

For gelotophobes, being in a happy relationship might be less of a priority than getting away from the feeling that everybody is ridiculing them. While everybody dislikes being laughed at to some degree, some people have such an aversion to the experience that it can be considered a real handicap, like any other phobia. Unfortunately, this type of phobia has only recently been recognized, and effective treatments are still being developed. Just as with other phobias, however, it is believed that gelotophobia can be treated and ameliorated.

As for developing a better sense of humor, research has shown that, while there are some genetic components to humor that make somebody more inclined to appreciate a good joke, your genes aren’t the end-all-be-all. Humor is just as much a product of nature as it is nurture, so there’s hope out there for those of you who hear crickets more than laughs. As for how you go about developing that sense of humor? Well, if we knew that, we’d all be comedians.

“The digital HQ – the digital infrastructure that supports productivity and collaboration – actually became more important than the physical HQ.”
Neuropsych

Talking to yourself seems to yield real benefits, from boosts in cognitive performance to improved emotional regulation.
Up Next
Health

Number of American parents not vaccinating infants has quadrupled

A measles comeback is not the sort of return our children deserve.