Where do thoughts come from? Though we’ve advanced our understanding of the physiological actions that lead to thinking, “where” they arise from remains uncertain. Freud believed thoughts operate at the level of the unconscious; modern psychology and neuroscience abandoned that idea decades ago. Experiences leave imprints—memories—that serve as blueprints for thought.

The developments of behavior therapy and cognitive therapy in the first half of the twentieth century laid the foundation for cognitive behavioral therapy (CBT), a form of mental health training that aims to disrupt cognitive distortions and behaviors and help regulate emotions. Initially applied to depression, this treatment now includes many other problems, including depression’s sometime-kin, anxiety.

While CBT’s roots can be traced to various therapists in the nineteen-twenties through the sixties, an emergence of “third wave” CBT kicked off in the eighties. This trend coincided with CBT being used as a catchall to describe a number of modalities, including dialectical behavior therapy, rational emotive therapy, and cognitive processing therapy. Today, CBT generally implies any treatment aimed at improving cognitive and emotional issues.

While a twentieth-century intervention, CBT was presaged in the philosophical school of Stoicism. CBT espouses a rational approach to psychosomatic and emotional malaise, making us recall the words of Socrates and Epicurus, both of whom believed philosophy is therapeutic. In fact, the latter, in Fragments, writes that “the philosopher’s school is a doctor’s clinic.”

Stoicism was founded by Zeno of Citium in the third century BCE. The philosophical foundation sounds Buddhist: don’t allow pleasure or pain to motivate your actions; accept each moment as it is; live a virtuous life by treating others fairly; live in accordance with nature. Also of note in this media-dominated age in which loud, unapologetic hypocrites hold office: judge a person by their actions, not their speech. Then you will know who they really are.

Zeno said that in order to flourish (eudaemonia), you must exhibit the will (prohairesis) to not be seduced by sparkly objects or the fear of death. This is accomplished through the acquisition of knowledge combined with an ability to implement the ethical framework that such knowledge demands. Stoicism flourished until Christianity dominated the region in the fourth century CE, though many have argued that CBT represents its modern incarnation.

Donald J Robertson and Trent Codd recently co-author a deep dive on the history of the relationship between Stoicism and CBT in the journal, The Behavior Therapist. The best modern example of Stoicism, they write, can be traced back to theologian Reinhold Niebuhr’s 1934 prayer:

The authors credit psychologist Albert Ellis, founder of Rational Emotive Behavior Therapy (REBT), for inspiring the modern renaissance in Stoicism as well as pointing out its applicability in psychotherapy. Ellis believed that emotional problems are not caused by external events, but rather “our irrational beliefs about such events.” This idea was borrowed straight from the pen of Epictetus, the first century CE Stoic philosopher.

Ellis opened the floodgate of Stoicism in his field, though as Codd and Robertson write, psychotherapists tend to read Ellis instead of retrieving the source. Nonetheless, the lineage is clear. Aaron T. Beck, the founder of Cognitive Therapy (and also heavily influenced by Ellis), liked to quote Marcus Aurelius:

“If thou are pained by any external thing, it is not the thing that disturbs thee, but thine own judgment about it. And it is in thy power to wipe out this judgment now.” 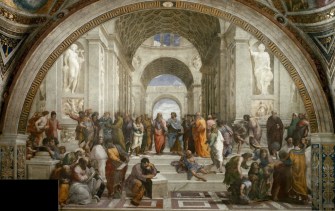 Big picture outlook: We are in control of our emotions. Emotions, as psychology professor Lisa Feldman Barrett writes in How Emotions Are Made, are not reactions but creations inspired by past experiences. This falls in line with Aurelius, whose quote above is not about the suppression of automatic response but rather choosing logic over irrational thinking. Emotions do not arrive from a mystical abyss. We have control in how we act and feel.

This is where logic is applied to psychotherapy: don’t simply fall back on old patterns of behavior because you’re accustomed to them, especially when you cast yourself as a victim or powerless cog in an uncontrollable process. As Niebur implies, many things are beyond our control. What is not is how we act in the face of adversity.

The Stoics knew that life was not about pleasure. Seeking only good feelings does not lead to freedom from the unpleasant realities of existence. These ancient philosophers preached the development of arete, excellence of character. They utilized the four foundations of Platonic virtue—wisdom, justice, temperance, and fortitude—as the philosophical bedrock in which to build that character. Such development requires self-control. Our brains seek quick dopamine hits that come with instant gratification. The tempered spirit sees the long game and adjusts accordingly.

Modern cognitive therapy techniques align with Stoicism in the understanding that emotions and beliefs are not derived from separate processes. Neuroscience backs this up: emotions are feelings, but what we feel must be translated into concepts. An upset stomach could be due to a break-up, yearning, or spoiled food. How we experience that feeling is not separate from the context that causes it. In each case, we have some amount of control over how we treat the symptom.

This leads us to another ancient practice that has recently experienced a renaissance: mindfulness. Paying continual attention (prosoche) to thoughts and feelings is the foundation of Stoic therapy. By recognizing destructive patterns of thinking the patient has an opportunity to reshape their experience of life.

The quest for this levelheadedness persists today and will likely persist as long as we’re alive. We should derive some comfort from the fact that humans have been chasing it for millennia. Maintaining poise and control during challenging times has always been difficult. Knowing that how we act during times of challenge begins in our heads is the key to empowerment.

Tags
ancient worldemotionshappinessphilosophypsychologyself
In this article
ancient worldemotionshappinessphilosophypsychologyself
Related
Neuropsych
Memory and the benefits of forgetting
Forgetfulness isn’t always a “glitch” in our memories; it can be a tool to help us make sense of the present and plan for the future.
The Learning Curve
5 Stoic quotes to help you through difficult times
“We suffer more often in the imagination than in reality.”
Thinking
6 great philosophers and how they used their political power
Most philosophers merely contemplate the world, but what about the ones who actually tried to change it?
Stoicism: How to turn your sadness into strength
Chloé Valdary shares the ancient Stoic principle that can defeat modern despair.
▸
7 min
—
with
Chloé Valdary
Sponsored
Want to boost your happiness? Buy experiences, not material possessions
Some experiences continue to pay dividends time and time again.
Up Next
Starts With A Bang
The Top 5 Myths You Probably Believe About The Big Bang
For over 50 years, it’s been the scientifically accepted theory describing the origin of the Universe. It’s time we all learned its truths.The Universe we know today, filled with stars and […]