As more U.S. states ease regulations on marijuana, cannabis’ second-most widely used compound, cannabidiol (CBD), has become one of the world’s fastest-growing industries. Currently worth more than $1 billion, the industry is expected to grow to $16 billion by 2025. And that’s largely due to the perceived therapeutic benefits of CBD.

One of the top three reasons people consume CBD is to treat chronic pain, according to a cross-sectional study of more than 2,400 CBD users. But can CBD actually treat pain?

Putting CBD to the test

A new study published in Experimental and Clinical Psychopharmacology is the first to explore that question using experimental pain trials. The results suggest that CBD really does treat pain, rather than just delivering a placebo effect at prices that sometimes match dispensary-grade marijuana.

“For science and the public at large the question remained, is the pain relief that CBD users claim to experience due to pharmacological effects or placebo effects,” Martin De Vita, a researcher in the psychology department in the College of Arts and Sciences, said in a press release.

“That’s a fair question because we know that simply telling someone that a substance has the ability to relieve their pain can actually cause robust changes in their pain sensitivity. These are called expectancy effects.”

To differentiate between expectancy effects and genuine pharmacological effects, the researchers asked 15 healthy adults to participate in a study involving a device that induces controlled levels of heat pain. After assessing participants’ initial response to the heat pain, they completed four sessions, each of which involved taking pure CBD oil or a placebo.

But the participants weren’t always correctly told which was which. The sessions were structured like this: 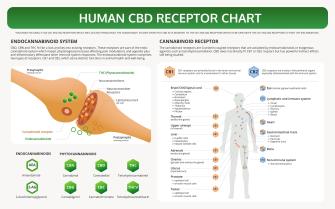 “We hypothesized that we would primarily detect expectancy-induced placebo analgesia (pain relief). What we found though after measuring several different pain outcomes is that it’s actually a little bit of both. That is, we found improvements in pain measures caused by the pharmacological effects of CBD and the psychological effects of just expecting that they had gotten CBD. It was pretty remarkable and surprising.”

CBD didn’t seem to reduce pain intensity, but participants who consumed it did report reductions in the unpleasantness of pain — even when they were told they were consuming a placebo. While reducing pain intensity might seem like the preferable metric, De Vita noted that pain exists not only in a sensory dimension but also an emotional one. 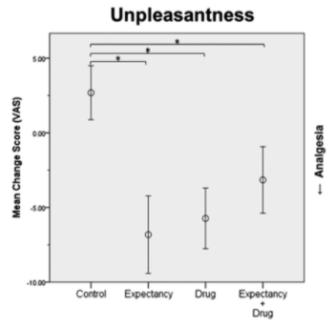 “It’s not sunshine and rainbows pleasant, but something slightly less bothersome,” he said. “We replicated that in this study and found that CBD and expectancies didn’t significantly reduce the volume of the pain, but they did make it less unpleasant—it didn’t bother them as much.”

Ultimately, the researchers said they were surprised to find that CBD’s pain-relieving attributes extend beyond mere expectancy. But understanding exactly how CBD interacts with the body’s pain-response processes, and how its analgesic aspects might help treat other conditions like anxiety, remain topics for further study.

An experiment in rats suggests that gene editing may be a treatment for anxiety and alcoholism in adults who were exposed to binge-drinking in their adolescence.
Up Next
Thinking

Could a pill make you more moral? Should you take it if it could?