The notion of uncaring and aloof felines is a persistent myth most often told by non-cat owners. Dogs, as wonderful as they are, are subservient and easily trainable. Cats are different beasts. They do not respond to punishment, only reward — clicker training is quite valuable — which baffles humans that expect cats to act like dogs.

I’ve long been baffled by the misperception that cats aren’t attached to humans. Whenever my wife and I are in our living room, our three cats surround us. One demands a lap or chest, another chooses to rest against a thigh, the third always nearby. Often, when I’m working in my home office, they share a futon. When I switch rooms, some or all follow, sometimes thinking I’m walking to the treat jar, sometimes simply to tag along.

Fortunately, I’m not the only person to question this long-held assumption. Researchers at Oregon State University decided to put feline feelings to the test. As their new study, published in the journal Current Biology, shows, cats form attachments to their human owners.

“In both dogs and cats, attachment to humans may represent an adaptation of the offspring-caretaker bond. Attachment is a biologically relevant behavior. Our study indicates that when cats live in a state of dependency with a human, that attachment behavior is flexible and the majority of cats use humans as a source of comfort.”

To test this, 70 kittens (between three and eight months of age) were placed in a room with their owner — or, as a cat might say, their human servant — for two minutes. The owner/servant then left for two minutes. Researchers wanted to see what happened when they returned. Nearly two-thirds of the kittens, 64.3 percent, showed immediate signs of attachment. The other third, well, not all kittens are cut from the same cloth.

The researchers then tested 38 cats that were one year of age or older. The percentage of attachments was nearly identical: 65.8 percent attached compared to 34.2 percent “insecurely attached” — they’ll live with you, but only because there’s no other option.

It’s tough to gauge exactly why some cats are insecure. Given that many cats are adopted, their history is unknown. One cat I adopted was abused; he lived in a closet for months before I took him into my home. He became attached, sleeping curled up by my side every single night, until one day he broke through a screen window and ended up living in a parking lot with a cat commune a block away. It was strange, walking by him on a daily basis, but he made his decision and lived out his life as he chose. 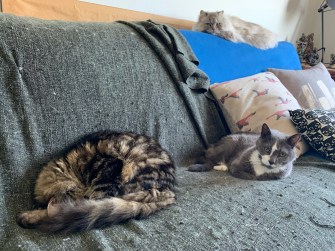 As the team in Oregon writes, domesticated animals retain certain juvenile behaviors because of their relationship with humans. When your food and shelter sources are provided, “growing up” is not as necessary as with feral cats. This goes beyond cats; humans and dogs do the same thing. In fact, it appears that cats are as attached to caregivers as humans and even more so than dogs.

“The current data support the hypothesis that cats show a similar capacity for the formation of secure and insecure attachments towards human caregivers previously demonstrated in children (65% secure, 35% insecure) and dogs (58% secure, 42% insecure) with the majority of individuals in these populations securely attached to their caregiver.”

Attachment is a mammalian phenomenon. We all have preferences; humans tend to like subservient animals, human or not. Cats might be not be dogs, but that doesn’t mean they don’t care. They might not care in the way that you’d like. Yet when you learn to speak their language, the bond goes in both directions.

Human beings are descendants of these early tetrapods – at least those who made a new life on land.
Up Next
Hard Science

Should we blame biology for our biosphere-bashing behavior?