Where do your enemies come from? That’s the topic of a new article published in the American Journal of Sociology, which investigates school bullying, a social phenomenon that affects millions of children every year. Despite the belief that bullies are existential foes, it turns out that the bully and bullied are likely to be friends—at least, “frenemies.”

Looking at 14 middle and high schools at two points in the year, the research team of Robert Faris, Diane Felmlee, and Cassie McMillan concluded that social proximity is not enough of a reason to abandon status elevation. Kids often climb over those closest to them in order to acquire greater standing in their networks—a power play that has adverse mental health effects on the bullied.

Their analysis began by comparing two parallel cohorts that create linear dominance hierarchies: chickens and summer campers. This game of dominance and ritualized submission is apparent in the barnyard and by the forest lake, as well as in high school, places where “overt aggression is not the only means by which status is attained.” Prom queens, they note, “do not fight their way to their thrones.” Subtler forms of bullying are often recruited.

Common wisdom has it that balance theory—the idea that enemies and friends share distinct social spaces—defines much of adolescent posturing. Not so, says this team: positive and negative ties are not as far apart as you might imagine. That’s where the concept of “frenemies” comes in. Cruelty is a strange bonding tool that serves the purpose of status elevation, at least for the bully.

“In contrast to both balance theory and much of the empirical literature on bullying, which concludes that victims are isolated or marginal and thus sit at relatively large social distances from their tormentors, we extend the logic of instrumental aggression to anticipate higher rates of aggression at low social distances, between friends and among structurally equivalent schoolmates.”

School Bullying: Are We Taking the Wrong Approach?www.youtube.com

Femlee, a sociology professor at Penn State, says her study offers important insights into why bullying occurs—and, potentially, leaves clues for how to combat it. Her team found peer aggression to be much higher among students that are proximal to one another, either through friendship or social circles. Bullying does not end friendships, she says; they persist over the long-term, with the bullied maintaining ties to their tormentors.

Looking at a data set of over 3,000 students—at least half were either bullier or victim—the researchers asked students to choose five classmates that had been mean to them, then analyzed these networks while racking levels of anxiety, depression, and suicidal ideation. As one student remarked, “Sometimes your own friends bully you. I don’t understand why, why my friends do this to me.”

Femlee elaborates on the complex dynamics of adolescence:

“These conflicts likely arise between young people who are eyeing the same spot on the team, club, or vying for the same best friend or romantic partner. Those who are closely linked in the school social network are apt to encounter situations in which they are rivals for identical positions and social ties.” 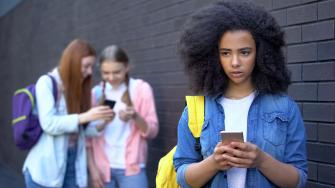 They note that strained friendships are more likely to produce dominance behavior and power differentials than close ties. Punching down is common, especially between students of the same gender, race, and grade. The race for recognition seems to necessitate close racial and gender ties. “Frenemies” usually result from one member of a group victimizing another in an attempt at clawing their way to the top of the network.

This competition can have lifelong effects, such as reducing the bullied’s chances of developing intimate relationships. The authors note that most bullying prevention programs fail becuase, in part, “aggressive behavior accrues social rewards and does so to a degree that leads some to betray their closest friends.”

Such programs tend to focus on a fraction of bullying dynamics, such as empathy deficits and emotional dysregulation. They fail to take into account the complex social dynamics of being a teenager. The authors believe coopting status contents and changing the behavior of high-status youths could have downline effects. Instead of dismantling hierarchies, they recommend recognizing status is intrinsic to group fitness instead of pretending the struggle to the top is an aberration. Only then can you create structural change.

Friends, they conclude, can be the problem but also offer the solution. Aiming for enduring friendships instead of backstabbing frenemies is a tall order but it could impact the tragedy of bullying—and the emotional carnage it leaves in its wake.

Inequality should be measured in terms of the time it takes for us to earn the money to buy the things we need. And everyone is getting wealthier.
The Future

This scientist collected thousands of secrets. They all had 3 things in common.
▸
7 min
—
with
Michael Slepian
Up Next
Case Studies

Will your product be a hit or a flop? This simple rule can help you decide.

What makes something a hit or a flop? Sit and ponder that one, and you’ll find it’s a stumper. At first, the answer seems obvious: popularity. That’s not quite right […]