Lie Detectors: The return of trial by ordeal 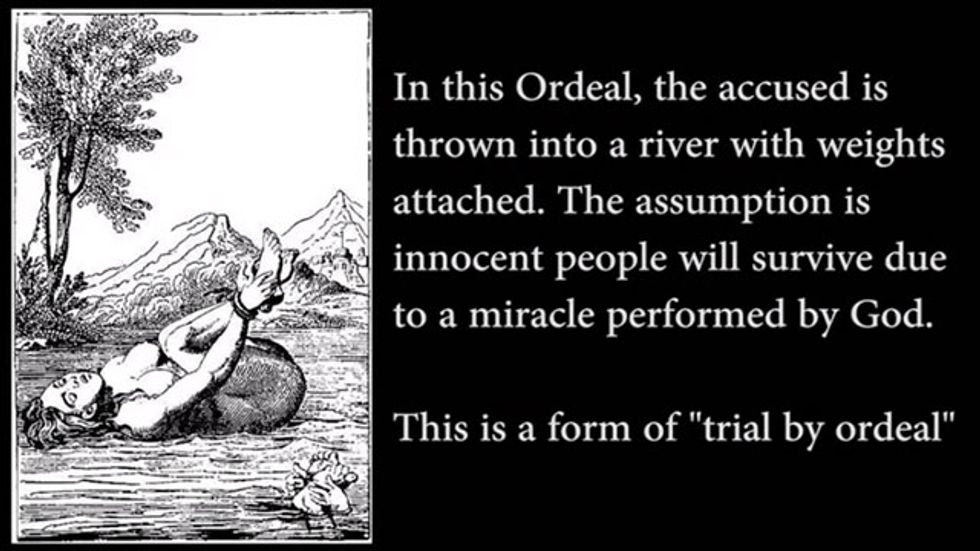 Up until 800 years ago, guilt and innocence in the UK was regularly determined not by judge and jury but through a process known as trial by ordeal:

“There were two main ordeals, by fire or by water (and occasionally the oath was to be proved by making the oath taker swallow a large piece of hardened dry bread!). In the ordeal of fire a piece of iron was put into a fire and then into the party’s hand, the hand was bound and inspected a few days later: if the burn had festered, God was taken to have decided against the party. The ordeal of water required the party to be tied and lowered into a pond; if she/he sank the water was deemed to have received her/him with God’s blessing, and she/he was quickly fished out.” - The Politics of Law by Geary, Morrison and Jago, 2nd Edition. Chapter 3. Pg. 45

Parliament is currently discussing a law that would allow for compulsory polygraph (lie detector) tests to sex offenders. Polygraph tests are inadmissible in UK court because the evidence is so flimsy, Dr Jamie Horder from the Institute of Psychiatry at King’s College London tells Sense About Science:

“Polygraphs don't work - that's why they're not admissible in court. They can't accurately distinguish between people who are lying and people who are telling the truth. If they work at all it is by the deterrent effect, people are more likely to tell the truth if they believe that the machine will catch them lying. The Ministry of Justice pilot which is being used as evidence for this decision had many limitations."

Like much of the US, the UK is about to return to the methods of the dark ages for determining innocence and guilt. The use of the polygraph technique in the UK will of course be limited to sex offenders - much like in more primitive times when such techniques were reserved for "witches":

“(after the Catholic Church banned priests from administering trial by ordeal), the ordeal soon became virtually obsolete (with the exception of witches).” - The Politics of Law by Geary, Morrison and Jago, 2nd Edition. Chapter 3. Pg. 45

It's clear that polygraph testing is amongst the weakest forms of evidence, but even well trusted techniques such as DNA testing and fingerprint matching are subject to bias. When fingerprints are ambiguous, we will unconsciously be biased by our knowledge of the case (PDF) . Similarly, even DNA experts will cast differing judgments depending on what they know about the case (PDF). With this knowledge of our inherent weakness to bias in mind, it’s difficult to see how a technique with a false-positive rate as high as the polygraph, can be seen as anything other than old-fashioned trial by ordeal.

Image Credit: Original Water Ordeal Engraving, in slide from the free English Common Law course from the University of London, which I highly recommend.